From the Editor's Desk

As appears in the February edition of Marine News

Now clear of the holidays and into an already exciting 2014 on the waterfront, we find ourselves plowing ahead with the proverbial bone in our teeth. That’s because, beyond my questionable nautical metaphor, there are big things happening for the domestic workboat industry in the coming months. As you dig deeper into this issue of MarineNews, you will soon see that much of that revolves around the United States Coast Guard. As you do, look also look for the pace of regulatory rulemaking, boatbuilding and mariner credentialing to increase exponentially.
While some industry stakeholders tend to view the Coast Guard as the bane of their compliance battles on so many fronts, the outreach of the nation’s first line of defense for homeland security are much more diverse than that. In this edition, the breadth of the Coast Guard’s impact on the nation’s workboat builders becomes clearer than properly treated ballast water. And, even in the face of the ongoing Beltway budget battles, that impact is set to grow in the coming months and years. It’s all good. The story starts on page 32.
Beyond its $30 billion recapitalization program, however, the Coast Guard’s rulemaking role is anything but dormant. With as many as 68 rulemaking efforts underway as of December 31, U.S. Coast Guard Commandant ADM Robert Papp has a lot to clear off his desk before he passes the baton to his as yet unnamed successor. For example, inland stakeholders hope that the long awaited subchapter M towing vessel rule will finally come to fruition this spring. Separately, the prospect of federal regulatory approvals for the carriage of fracking waste on the nation’s inland barge fleets also hangs in the balance. These issues – impacting both operating expenses and revenues alike – will dramatically affect the bottom lines of domestic operators. And, as February comes and quickly goes, as many as 200,000 credentialed U.S. mariners are wondering how the National Maritime Center will keep up with the more than doubling of its medical approvals workload in the coming year.
It is never easy to predict what will come next, especially when it comes to the world of maritime affairs. Last month, for example, the U.S. Maritime Administration woke up from its self-imposed four-year slumber to host a high profile National Maritime Symposium in Washington, DC. The gathering, also intended to re-awaken national awareness of the domestic maritime industry and its many problems, certainly stirred up emotions with passionate speeches and pointed rhetoric. What remains to be seen is whether the brief attendance by several prominent federal lawmakers will eventually translate into concrete action from the U.S. Department of Transportation.
Outgoing Virginia Secretary of Transportation and former U.S. Maritime Administrator Sean Connaughton said it best last month when, also within the pages of this edition, he declared, “Incredibly, it seems that the federal constraints are increasing at the same time that their financial commitment going down. It is hurting jobs, the economy, and American competitiveness. Something has to change.” I couldn’t agree more. What about you?

(As published in the February 2014 edition of Marine News - www.marinelink.com) 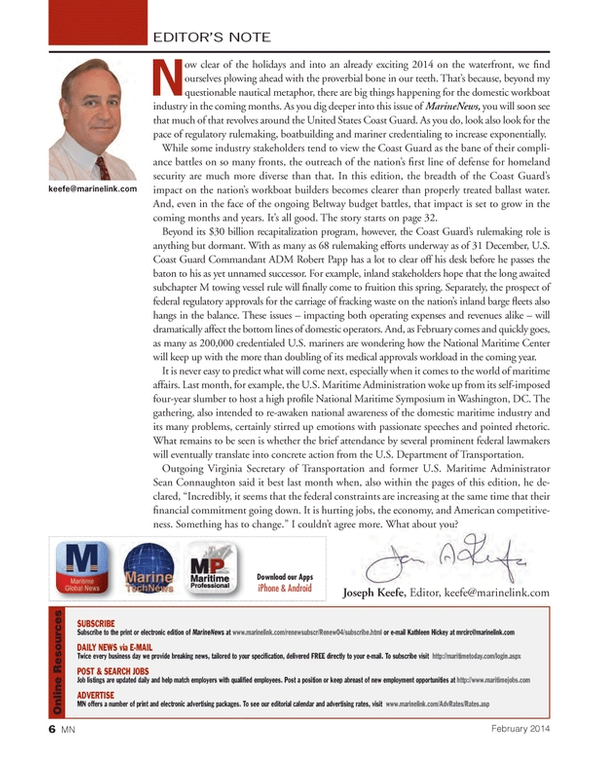 Read From the Editor's Desk in Pdf, Flash or Html5 edition of February 2014 Marine News