A changing tax landscape doesn’t have to mean bad news – at least not just yet.

A Changing Landscape
Historically, bonus depreciation has had a significant effect on construction of new vessels, allowing businesses to initially expense 30 percent, occasionally 100 percent and most recently 50 percent, plus the standard Modified Accelerated Cost Recovery System (MACRS) of the cost of newly built equipment. In the first year of purchase, this had a significant effect on the building of new vessels.  Order books at most builders swelled as the incentives kicked in. Section 179 expensing for “new to you” assets ranged from a low of USD $20,000 in 2000 all the way to $500,000 in 2013.
Then, in December of last year, the U.S. Senate rejected legislation that would have continued bonus depreciation and the higher limits on Section 179 expensing.  So, at midnight, December 31, bonus depreciation expired and the Section 179 expensing fell from a $500,000 cap with a $2 million investment ceiling to a $25,000 cap with a $200,000 investment ceiling. Ouch.
As MarineNews went to press with this column, there was little probability that these tax incentives will be renewed. That said; all is not lost – not yet, anyway. While on its last few gasps of breath, bonus depreciation can still be applied as a tax strategy in 2014 for 2013 business conducted in 2013 (IRS Regulation §1.168 [k]-1. Additional first year depreciation deduction and Internal Revenue Code Section § 168 Accelerated cost recovery system).

Meeting the Burden of Bonus Depreciation
In general, there are a number of requirements that would need to be met in order to take bonus depreciation in 2014:

If all of the foregoing criteria are met, with the necessary qualifications satisfied, the ship owner may take 50 percent bonus depreciation in 2014 for 2013 business, provided that the property is placed in service in 2014. The written binding contract may be the hardest test to meet. The term “written binding contract” is defined by IRS regulations to mean any contract that is enforceable under state law against the taxpayer and does not limit damages to a specified amount. For this purpose, damages are not considered limited if the contract contains a provision that limits damages to at least 5 percent or more of the total contract price.

More Options
In the event that your business has missed the window for bonus depreciation and expanded Section 179 expensing, or have has used up a significant portion of its available depreciation, there still may be a way to reduce its tax bill. For example, if your business still has debt payments from a loan and is about halfway through the amortization period, it may be time to consult with your accountant and perform a cost/benefit analysis of a sale/leaseback transaction.
In an operating lease, such as a bareboat charter, your rent payment is, in most cases, 100 percent deductible. In a bareboat charter, the business does not own the equipment; you rented it for a period of time. The business may be offered an early buyout option (EBO) to exercise and it may choose to buy the equipment at that time. If the business chooses not to exercise the EBO, at the termination of the charter it may have the option to purchase, re-charter it or return the equipment to the ship owner.
In a loan, a business can deduct depreciation and interest, but not principal. If you used up most of your depreciation, either from aging or accelerated the depreciation under bonus, the benefit of ship ownership may decline.
Let’s say that at the end of five years on a $2,000,000 ten-year loan, the principal balance remaining on the ship’s mortgage is $1,339,784.62. Since the business has already depreciated most of the original cost under bonus plus MACRS, a sale/leaseback for that amount may offer you tax benefits from the amount of the rent you pay that is no longer available though the mortgage.
The sale of the vessel may create a taxable event whether or not a business has claimed its legal depreciation.  To calculate your basis, take what you paid for the asset, adding in any capital repairs or improvements, and then subtract the depreciation. If a business sells it for more than the original price, the profit will be subject to capital gains tax. The IRS also charges a tax, which varies depending on what is being sold, on the difference between the depreciated basis and the selling price. (Any gain on the sale is taxed as ordinary income to the extent the business previously took depreciation. Any gain above and beyond that, is taxed as capital gains).
In the end, each individual situation will vary. Depending on the financial condition of your business, ship ownership may be of diminished tax benefit to you. One available option is to identify a financing source that finds ownership attractive and consider selling your the vessel to them. As the asset will be new to them, the purchasing party will depreciate it and use that depreciation to reduce the amount of rent paid by the business. By having the business rent the vessel back from the purchasing party, they may be able to deduct the rent from your their taxes. Everybody ends up happy.

(As published in the March 2014 edition of Marine News - www.marinelink.com) 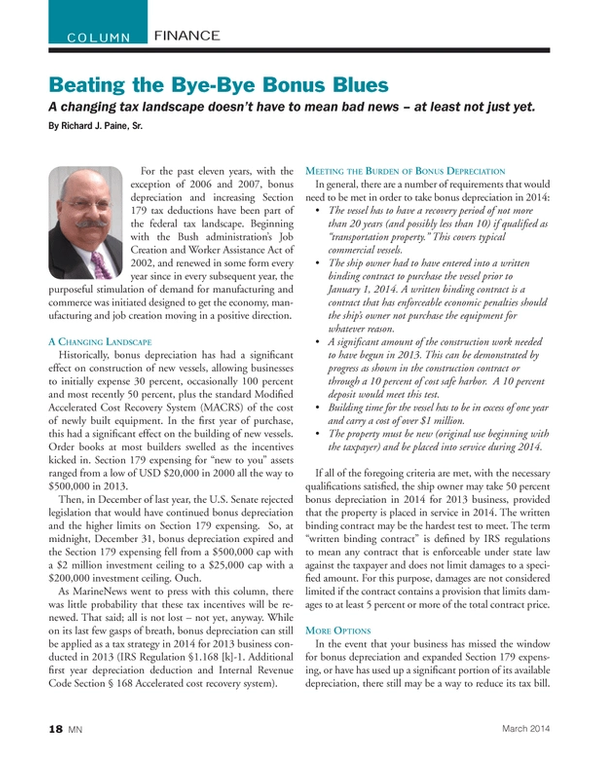