McAllister Avoids a Date with the Drydock

In the towing segment of the marine industry, sometimes it does seem that boats are under perpetual repair. A tugboat that’s tied up in maintenance and not able to work is a lost revenue opportunity. As a result, limiting time out of service by performing repair and retrofit services dockside is of critical importance. For example, McAllister Towing & Transportation was able to accomplish repairs not just quickly, but at a lower cost and in a safer manner than conventional methods. That’s just one way that a 150-year old workboat operator can optimize its fleet operations. It turns out that you can, too.

The McAllister Story
You don’t stay in business for one and one-half centuries unless you continually find new and better ways to run a more efficient operation. Founded in 1864, McAllister Towing & Transportation is one of the oldest and largest family-owned marine towing and transportation companies in the United States. The company operates a fleet of more than 70 tugboats and barges in 17 locations along the eastern seaboard, from Portland, Maine, to San Juan, Puerto Rico. Their mission mix runs the gamut from ship docking, general harbor towing, coastal towing and bulk transportation in each port.
McAllister operates three tugs out of Baltimore, including the Robert E. McAllister, a harbor assist tractor tug. Built in 1969 by Peterson Builders of Sturgeon Bay, Wisconsin, the Robert was originally a United States Navy vessel, the USS Nanticoke (YTB-803). Launched on December 14, 1969, she was eventually struck from the Naval Register in 1999, and, in 2002, sold through the Defense Reutilization and Marketing Service to Nix’s Mate Equipment Company of Salem, New Hampshire, where she was renamed as the Canal Protector.
McAllister later acquired and renamed the tug the Robert E. McAllister. In 2005, she was rebuilt. Two Caterpillar 3516B diesel engines replaced her single Fairbanks-Morse engine, and the rudder and propeller were replaced with a pair of Schottel SRP 1012 Z-drives for a rated 4,000 horsepower.

A Quick Fix for Leaky Couplings
Not surprisingly, and despite all of the upgrades performed by McAllister, a bolted sleeve type coupling on the Robert’s engine cooling water supply line sprung a leak, and maintenance personnel needed a way to fix it quickly, once and for all. It wasn’t the first time that joint had leaked, and if they tightened it as they had in the past, there was no guarantee the seal—or for that matter, the coupling—would hold. The particular type of coupling used on that and other engine cooling water lines in the McAllister fleet is a non-restrained coupling, meaning there’s nothing to hold the coupling in place on the joint. On another McAllister tug, the same type of coupling slipped and started to flood the engine room.
In need of a better, long-term solution, port engineer Carlo Parrotta investigated his options. Limiting the tug’s time out of service was the most important factor, so complete replacement of the line wasn’t an option at the time. Parrotta explained, “I was considering welding the pipe. But the problem was that I didn’t have the luxury to go into the drydock. I didn’t have an extreme length of time to go about the service.” Replacement with the same or a similar type of coupling was certainly an option, but would have required a harness to be installed to prevent the coupling from slipping. It also would have made it more difficult to service the systems surrounding it.
In this case, Parrotta was familiar with mechanical pipe-joining systems manufacturer Victaulic, having used its products in previous roles throughout his 25-year career in the maritime industry, so he called the company to see if it could supply a solution. Company representatives visited the Robert to review the application and specs, and recommended the Style 99 Plain End Roust-A-Bout Coupling to replace the bolted sleeve couplings.

Meet the Style 99
The Style 99 is a rigid coupling that has integral hardened carbon steel “teeth” that bite into the outer diameter of each pipe-end, providing the steel-to-steel engagement Parrotta desired. Positive engagement of the pipe is achieved when the bolts are torqued to specification, as marked on the coupling housing. No special pipe preparation—beyond ensuring a smooth, debris-free surface at the pipe-ends—is required prior to assembly.
The Style 99 has multiple IACS type approvals and is Coast Guard approved. ABS type approvals cover fresh water systems; sea water cooling; ballast systems; vents, overflows and sounding pipes; potable water systems; and fire main systems. Plain-end couplings such as the Style 99 are advantageous for retrofit and repair services because there’s little upfront tooling cost. The lack of extensive pipe-end preparation means the coupling can be installed quickly, limiting downtime, which also met Parrotta’s needs. As a result, McAllister decided to move forward with the repair using the Style 99 couplings.

The Fix
To complete the repair, the bolted sleeve couplings were disassembled and removed, the pipe was pulled from the hangers, and the pipe-ends were cleaned of scaling, rust and paint where the new couplings would be installed. The pipe was then repositioned and the Style 99 couplings were assembled on the joints. The repair was completed dockside in just over an hour.
Parrotta, who installed the couplings himself, remarked that the installation process was very simple. It did not require him to bring in a certified welder and deal with the safety hazards and other considerations welding in the space would have posed. Avoiding hot works meant there was no need to clean the surrounding area of standing oil or oil vapors, no need for a fire watch, and no need for weld inspection.
Eliminating welding also meant significant cost savings. Instead of paying a welder for an eight-hour day, the cost was limited to the price of the couplings, which was well within the repair budget. In fact, the savings allowed Parrotta to purchase more units than he needed for the repair on the Robert, and he’s now in the process of replacing—as time and opportunity allow—the same bolted sleeve couplings with Victaulic Style 99 couplings on other McAllister tugs. Furthermore, Parrotta is using the Style 99 coupling for other applications where the cost savings are even more substantial, such as fuel oil vent lines.

Fleet Optimization Defined: Safer, Cheaper Maintenance
When a leak developed at the base of a fuel oil tank vent line on the Robert E. McAllister, it potentially meant thousands of dollars in repair costs. The process could have involved drydocking the boat, emptying the fuel tank, cleaning the tank, calling in a marine chemist to confirm that it’s safe to weld, cutting the pipe and welding to complete the repair. Instead, McAllister’s Parrotta was able to cold-cut the pipe, cap the fuel end of the pipe, and use a torch to remove the remaining portion on the deck and install the new section of prefabricated pipe. Hot work was avoided by completing the on-board connections with the Style 99 couplings, and all work was completed dockside.
“I saved myself several thousand dollars on a marine chemist, several thousand dollars on cleaning the tanks, and the aggravation of waiting several years until the next drydock,” Parotta said, adding, “If you add all these costs, I would have been, conservatively, $15,000 in the hole—all that, just to weld a little hole. When you’re doing all this, the boat is not available for work. By doing it the way we did, it was a fraction of the cost and it took us three hours to do it, compared to probably a week.”
Parrotta adds that the fuel oil vent mechanisms are notoriously difficult to work with. Being above deck and exposed to salt water, varying weather conditions and damage, the vents need constant maintenance as well as testing to ensure proper function. The mechanisms don’t get serviced very often—usually every four to five years at drydock time. During that time, the threaded joints are susceptible to rust and are typically covered in multiple coats of paint, making the vents extremely difficult to remove.
Based on the success of previous applications of the Style 99 couplings, Parrotta decided to ease future maintenance of the fuel oil vent mechanisms by cutting and rejoining the pipes with Victaulic plain-end couplings. This allows personnel to remove the vent for servicing by simply loosening two bolts and removing the coupling from the joint. Reinstallation is as quick as the initial installation. “It makes our job effortless,” said Parrotta, adding that he has completed this work on two of the three tugboats based in Baltimore, and is recommending it to other McAllister port engineers.

Proven Performance = Economy of Scale
The Victaulic Style 99 Plain End Roust-A-Bout Coupling has proven advantageous for McAllister Towing & Transportation in multiple ways, from reducing time out of service, to limiting repair costs and safety hazards. Parrotta said of the solution: “My goal is to do the job as efficiently and safely as possible, and with the least amount of stress and time. If I save time, I save money for the company and reduce the time the tug is not available to do its job. And it’s being done safely, and with a reliable product. I’m happy. I’ve been using [Victaulic couplings] for years, and I’ve never had a problem.” Optimizing his fleet – that’s job ONE for Parotta. For over 150 years, McAllister has been coming up with similar solutions to their operational issues. So can you.

(As published in the March 2014 edition of Marine News - www.marinelink.com) 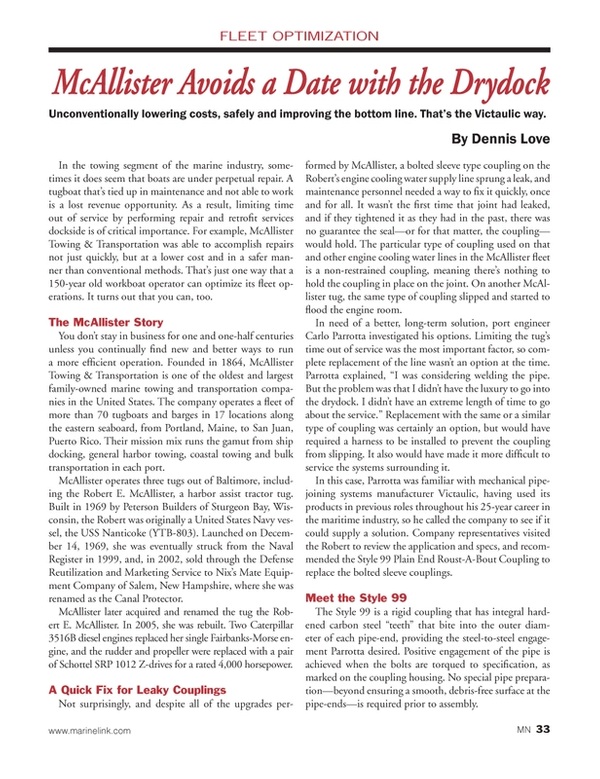 Read McAllister Avoids a Date with the Drydock in Pdf, Flash or Html5 edition of March 2014 Marine News