Over the last few months, the inland waterways system has been particularly stressed by both emergency and Mother Nature-inflicted outages at key locks and dams. Lock and Dam (L&D) 52 on the Ohio River was closed September 6-14 when the dam’s low-lift wooden wickets could not be raised to hold a stable pool for navigation, halting shipping on the river. Given the river’s conditions, the wicket gates had to be raised individually, by hand, to impound water to create the pool. While raising the wickets, the U.S. Army Corps of Engineers found that five consecutive wickets were missing or could not stand.

Due to swift river currents, approximately 320 feet of the dam was not raised, resulting in loss of pool (and loss of navigation) above the dam. The fast-moving water velocity coming from the up-stream Barkley, Kentucky, and Smithland Dams made it too dangerous for the Corps to repair the dam at that time. The Corps’ was able to reduce flows from the upstream dams that allowed the water velocity to subside enough to continue raising the rest of the wickets to stabilize the pool.
Even with a shortened nine-day closure versus the initial 30-day outlook the Corps had anticipated, there were 40 tows waiting to transit Lock 52 with another 34 tows waiting above Smithland Lock and Dam. In order to replace the broken/missing wickets, the Corps later had to place a rock dyke above the dam at Lock 52 to allow divers to make repairs. This meant another 24- to 48-hour complete river closure.
A mere 72 hours after navigation resumed at L&D 52, the Corps had to raise the dam at Lock 53, delaying traffic for an additional 24 hours. Once the navigation pool was stabilized at Lock 53, the Corps found obstructions in the main chamber that did not allow the lower gates to close properly. This stalled navigation again for yet another 24 hours while the Corps removed the obstruction. Navigation had resumed, but only through the 1200-foot chamber at Lock 53 because the 600-foot chamber was inoperable.
The Corps eventually fixed these problems, but vessels shipping key commodities waited more than 80 hours per vessel in a queue that was, at one time, nearly 56 river-miles long. In addition to farmers shipping grain during the critical harvest season, power plants, manufacturing plants and municipalities that draw water from the Ohio River were advised by the Corps that the pools of water they depend upon could have also been lost in this outage. The outage at L&D 52 and 53 also triggered other back-ups up and down the Ohio River, including locks at Smithland, Cannelton, Meldahl and Dashields.
In service since 1928, Locks and Dams 52 and 53 will be replaced by the Olmsted Lock and Dam which was authorized in 1988, but will not open until next year. Once Olmsted is finished, L&D 52-53 will be dismantled and removed.
The failure of this critical infrastructure came just three months after President Trump visited the Ohio River on June 7, proclaiming that “these critical corridors of commerce depend on a dilapidated system of locks and dams that are more than half a century old. And their condition, as you know better than anybody, is in bad shape. It continues to decay. Capital improvements of the system, which [are] so important, have been massively underfunded. And there’s an $8.7 billion maintenance backlog that is only getting bigger and getting worse....citizens know firsthand that the rivers, like the beautiful Ohio River, carry the life blood of our heartland,” he said.
During his June speech, the President also noted a similar outage on the river near Pittsburgh, saying, “Last December ... one lock built more than 50 years ago had to be shut down for five days due to hydraulic failure. And you know what that means? Five days means everything comes to a halt. We simply cannot tolerate a five-day shutdown on a major thoroughfare for American coal, American oil, and American steel, which is going to get more and bigger ... America must have the best, fastest and most reliable infrastructure anywhere in the world. We cannot accept these conditions any longer.”
While few details have been revealed, the Trump Administration has said that it will undertake a $1 trillion infrastructure initiative to repair America’s infrastructure, which WCI hopes will include the inland waterways’ locks and dams among other areas being considered for modernization such as wastewater systems, bridges, roads, and rural broadband technology. WCI continues to advocate strongly for modernization of the inland waterways lock and dam infrastructure as part of this initiative.
“Together, we will fix it. We will create the first-class infrastructure our country and our people deserve,” the President said on the Ohio River.
Let’s hope that he – and Congress – will do just that and the inland waterways can continue to deliver America’s goods to the world.
Editor’s note: We often talk about what could happen in the event of a major inland river infrastructure calamity. Now, we know.
The Author
Mike Toohey is President/CEO of the Waterways Council, Inc.
(As published in the December 2017 edition of Marine News) 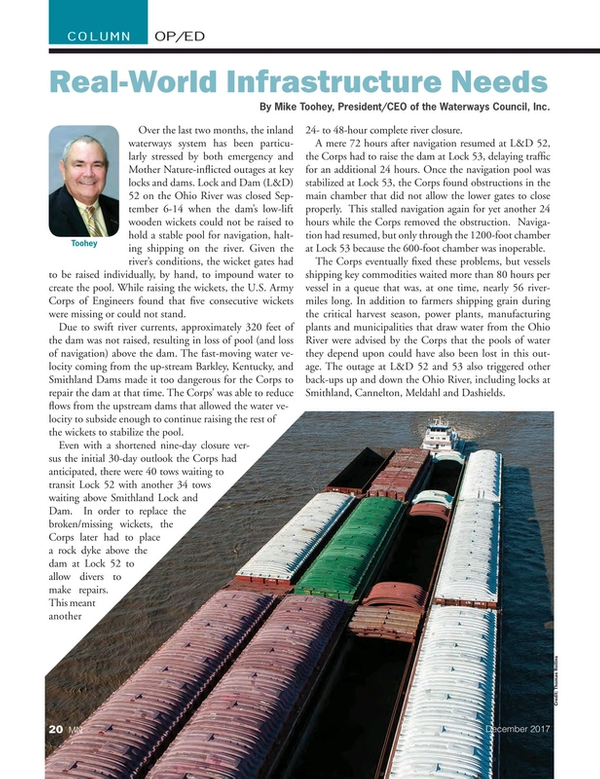