Jensen Maritime was recently selected to provide the design for Baydelta Maritime’s new 100-foot, Z-Drive hybrid tugboat. It will use Rolls-Royce hybrid technology and represents the first installation of a hybrid system for Nichols Brothers Boat Builders (NBBB), and the first hybrid tug designed by Jensen to enter the construction phase. Scheduled for delivery in the first quarter of 2019, the tug will feature the same ship assist and tanker escort capabilities of existing Valor class harbor tugs, but with multiple operational modes.

The Rolls-Royce hybrid system allows for the vessel to operate direct-diesel, diesel-electric or fully-electric while assisting the large containerships and tankers that operate in U.S. West Coast ports. This concept will save fuel and reduce emissions, while supplying Baydelta with the same power and vessel characteristics needed for their operations. The flexibility provided by the drive system will allow loitering and transit at up to 7-8 knots in electric-only mode, then a bollard pull of 90, or nine short tons, in combined diesel-electric mode.

The 100-foot long tug will feature greatly improved towing performance. Rolls-Royce will supply all electric motors, shaft generators and a power management and control system. The Hybrid arrangement provides power to US255 azimuth thrusters with ducted fixed pitch propellers that can be rotated 360 degrees around the vertical axis. This arrangement optimizes omni-directional thrust and maneuverability as well as providing improved crash stop capability.

Rolls-Royce and Baydelta have been working together since 1990s, when the San Francisco-based operator specified its first azimuth thrusters. Since then Baydelta’s entire fleet of tractor tugs is equipped with drive units.

Baydelta Maritime specializes in escorts and assists in the San Francisco Bay and is committed to keeping the bay safe and efficient. With the new hybrid tug, this will be the seventh NBBB built tug in Baydelta’s fleet; though, the first hybrid tractor tug. In addition to the drive units and hybrid system, Rolls Royce will be supplying the control system and main switchboard, electric motors and their control cabinets. 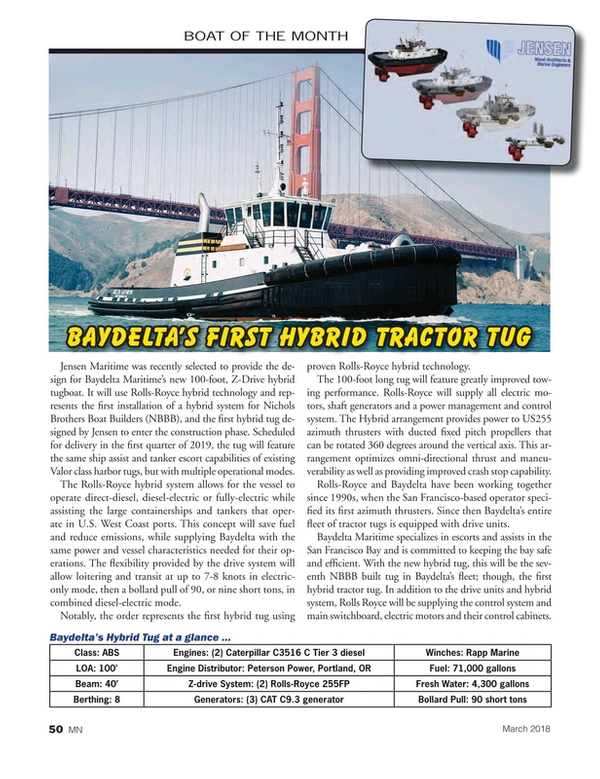