The reasons for that are many and these realities cater to regulatory, commercial and regional needs.

The U.S. dredging market is complex and relies on the diverse fleet of private dredging companies to get the job done. In addition to design and technical capabilities, environmental restrictions and regulations often dictate whether a trailing suction hopper dredge, cutter suction dredge, or mechanical dredge can respond to the coastal protection, wetland restoration, port deepening, and channel maintenance needs of the Nation. No matter what the need, domestic dredgers are meeting the challenge.

Trailing Suction Hopper Dredges
Trailing suction hopper dredges (TSHDs) operate hydraulically and are well-suited for dredging materials ranging from soft mud and silt to dense sands and clay. TSHDs may have one or two drag-arms that lower to the seafloor and suck up material in much the same fashion as a vacuum cleaner, as the dredge moves through the project area. The mix of material and water pulled in by the pumping system is then discharged into the “hopper” of the vessel. The solid, sandy part of this slurry sinks to the bottom of the hopper while the water separates, rises to the top, and drains overboard; creating what is known as water column turbidity. TSHDs are often restricted from working the inner harbors and reaches of U.S. ports due to environmental restrictions related to turbidity, marine ecosystems, and sea life. When the hopper is fully loaded, the TSHD sails to an unloading site to discharge the dredged material into the ocean through the bottom doors of the hopper or to discharge it beneficially through a floating pipeline to rebuild coastlines and protect communities. Self-propelled and nimble, TSHDs operate well in high-traffic areas and in relatively rough seas, proving effective at ocean entrance channels and in deep water. They can transit quickly to placement sites under their own power without the need for tug assist or towing. TSHDs are used extensively for routine harbor maintenance, beach building, and clearing out the Mississippi River’s Southwest Pass during the annual flood season.

Cutter Suction Dredges
Cutter suction dredges (CSDs), commonly known as “pipeline dredges,” also operate hydraulically, using a mechanical device called a cutterhead with sharp rotating teeth to break up the bottom material so that it can be sucked through the dredge and discharged via floating pipeline. They dredge employing a sideways swinging motion using anchors and winches and move forward or “walk” by raising and lowering tall tower-like spuds. They can handle a variety of materials, including sand, gravel, clay, soft rock, and thin layers of hard rock. The floating pipeline used to transfer dredged material can extend many miles.

For example, the Port of Corpus Christi Deepening Project is equipped with Great Lakes Dredge & Dock’s CSD Carolina, which is transferring the material through five miles of pipeline to a placement site in the Gulf of Mexico. CSDs operate continuously yet lack the inclement weather maneuverability of TSHDs. Nevertheless, they are frequently contracted for many dredging projects, including wetland restoration, beach renourishment, land reclamation, port construction, and harbor maintenance.

Mechanical Dredges
Mechanical dredges remove material by scooping it from the seafloor and placing it into a barge or an approved placement area. Dipper, backhoe and clamshell dredges fit into this category. Each is mounted onto a large barge, towed to the dredging site, and then secured in place by anchors or spuds. They are well-suited for harbors, near docks and piers, relatively protected channels, and tightly confined footprints. Usually two or more disposal barges, called scows, are used in conjunction with a mechanical dredge. While one barge is filled with material, another barge transits to the disposal area and then returns to repeat the cycle, allowing for near continuous and uninterrupted operations. Mechanical dredges are particularly efficient on projects where the placement site is several miles away.

Clamshell Dredges
Clamshell dredges are designed to handle loose to medium dense soils and dredge materials, while backhoe and dipper dredges are used to remove consolidated or hard-packed materials and can be used to clear rock and debris. Hooded or enclosed buckets are utilized to control the flow of water and to prevent contaminated sediments from seeping back into the water column.

Horses for Courses: Environmental & Marine Fisheries Regulations
State and federal laws and regulations in the U.S. limit or exclude the use of particular dredges.  Specifically, many port deepening, widening, and general maintenance projects exclude the use of hopper dredges because of turbidity and the potential impact to marine ecosystems and sea life, as stated earlier.

The National Oceanic and Atmospheric Administration (NOAA) closely regulates turbidity levels resulting from dredging activities. NOAA defines turbidity as “a measure of the clarity of a liquid (water) and is usually expressed as the amount of light that is scattered and absorbed by materials or particulates found in the water. The more that light scattering occurs, the higher the turbidity.” Turbidity causes water to appear cloudy or muddy, but it is not a measure of the concentration of suspended sediments. Particulate matter in the water that contributes to turbidity includes inorganic solids (e.g. sediments), organic solids or detritus produced by living organisms, and living organisms (e.g. phytoplankton and zooplankton).

Turbidity is influenced by a number of factors associated with sediment particles aside from the concentration of particles, including particle size and shape, refractive index (the measure of light bending as it passes through one medium into another), color, and absorption spectra.

NOAA also states that total suspended solids (TSS) is a quantitative measure of the total dry weight mass of the particles or material present in a given amount of water. Measuring TSS is important for considering its effects on living organisms, especially when elevated concentration levels can harm organisms through gill choking or smothering eggs on the riverbed.

Federal and state agency determinations hold that turbidity and suspended sediment can affect marine life including but not limited to Atlantic salmon, shortnose sturgeon, Atlantic sturgeon, striped bass, and manatees, just to name a few. Hence, hopper dredge exclusions and restrictions have appeared and are continuing to appear in Army Corps solicitations for many of the most high-profile port deepening, widening and maintenance dredging projects in the United States, such as in the Houston Ship Channel, Baltimore, Savannah, Charleston, Port Canaveral, Boston, and San Juan, Puerto Rico.

The U.S. dredging industry has a long history of adapting and building a fleet tailored to meet the demands of the market in accordance with environmental regulations, and it continues these investments today with a $1.5 billion expansion program. Last year alone the private sector increased hopper dredging fleet capacity by 34% with the addition of two large TSHDs – specifically, Great Lakes Dredge & Dock Company’s Ellis Island and Weeks Marine’s Magdalen. This summer Weeks Marine also launched a new 30-inch cutter suction dredge, the JS Chatry, and The Dutra Group put into service a 6,000cy hydraulic dump scow. Callan Marine is currently building a 32-inch cutter suction dredge, Manson Construction Co. has commenced design on a large TSHD, and Cashman Dredging is procuring long-lead time equipment for the construction of two 6,000cy TSHDs.

All of these efforts – and more – are signs that domestic dredgers are producing the tools that the market requires and is well positioned to meet the Nation’s needs today, tomorrow and for decades to come. 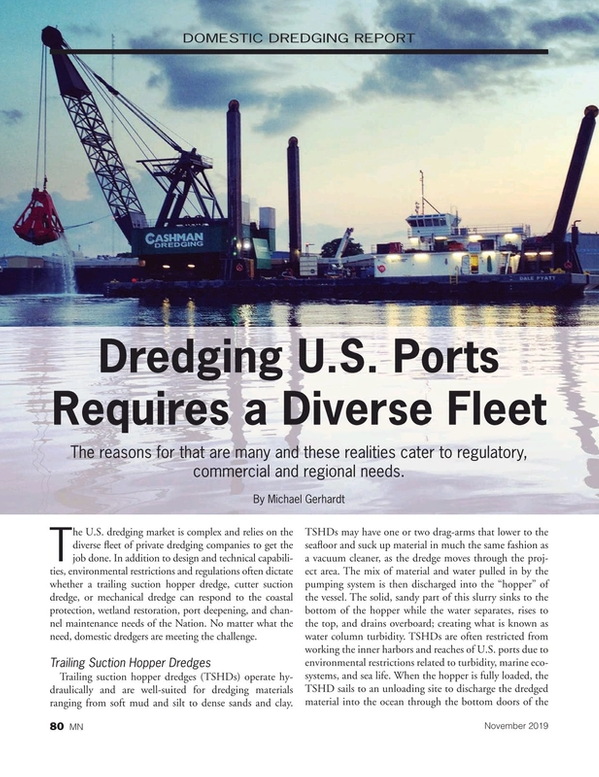