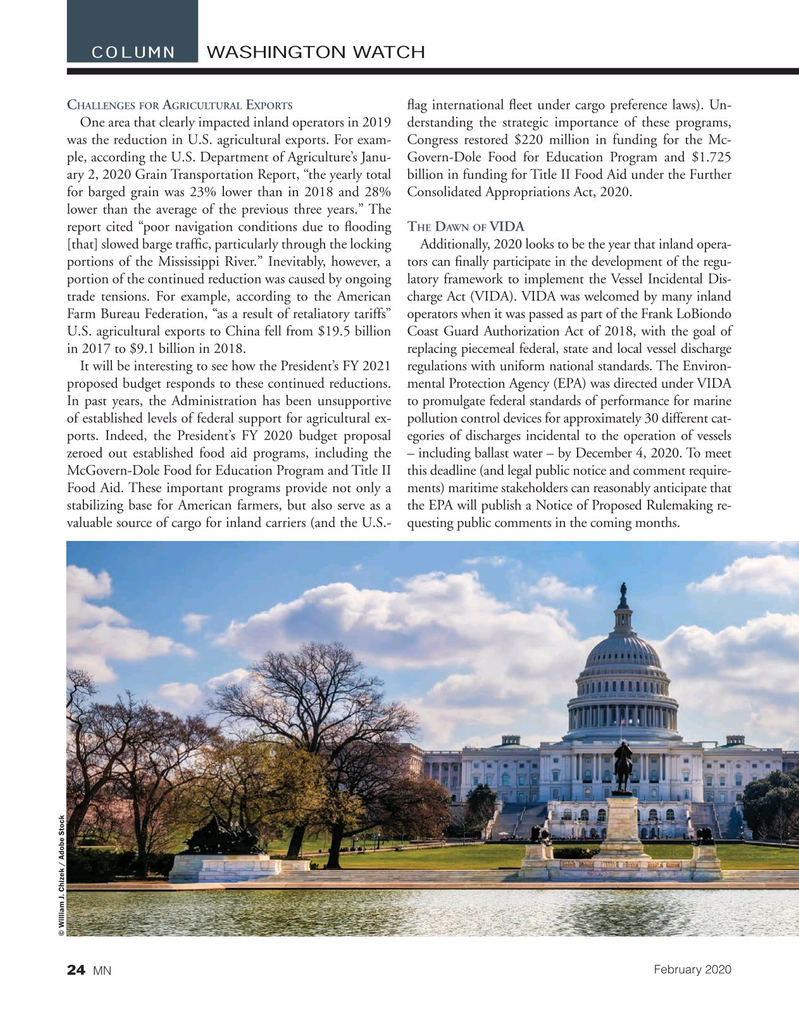 One area that clearly impacted inland operators in 2019 derstanding the strategic importance of these programs, was the reduction in U.S. agricultural exports. For exam- Congress restored $220 million in funding for the Mc- ple, according the U.S. Department of Agriculture’s Janu- Govern-Dole Food for Education Program and $1.725 ary 2, 2020 Grain Transportation Report, “the yearly total billion in funding for Title II Food Aid under the Further for barged grain was 23% lower than in 2018 and 28% Consolidated Appropriations Act, 2020. lower than the average of the previous three years.” The report cited “poor navigation conditions due to ? ooding T D VIDAHE AWN OF [that] slowed barge traf? c, particularly through the locking Additionally, 2020 looks to be the year that inland opera- portions of the Mississippi River.” Inevitably, however, a tors can ? nally participate in the development of the regu- portion of the continued reduction was caused by ongoing latory framework to implement the Vessel Incidental Dis- trade tensions. For example, according to the American charge Act (VIDA). VIDA was welcomed by many inland

Farm Bureau Federation, “as a result of retaliatory tariffs” operators when it was passed as part of the Frank LoBiondo

U.S. agricultural exports to China fell from $19.5 billion Coast Guard Authorization Act of 2018, with the goal of in 2017 to $9.1 billion in 2018. replacing piecemeal federal, state and local vessel discharge

It will be interesting to see how the President’s FY 2021 regulations with uniform national standards. The Environ- proposed budget responds to these continued reductions. mental Protection Agency (EPA) was directed under VIDA

In past years, the Administration has been unsupportive to promulgate federal standards of performance for marine of established levels of federal support for agricultural ex- pollution control devices for approximately 30 different cat- ports. Indeed, the President’s FY 2020 budget proposal egories of discharges incidental to the operation of vessels zeroed out established food aid programs, including the – including ballast water – by December 4, 2020. To meet

Food Aid. These important programs provide not only a ments) maritime stakeholders can reasonably anticipate that stabilizing base for American farmers, but also serve as a the EPA will publish a Notice of Proposed Rulemaking re- valuable source of cargo for inland carriers (and the U.S.- questing public comments in the coming months. © William J. Chizek / Adobe Stock