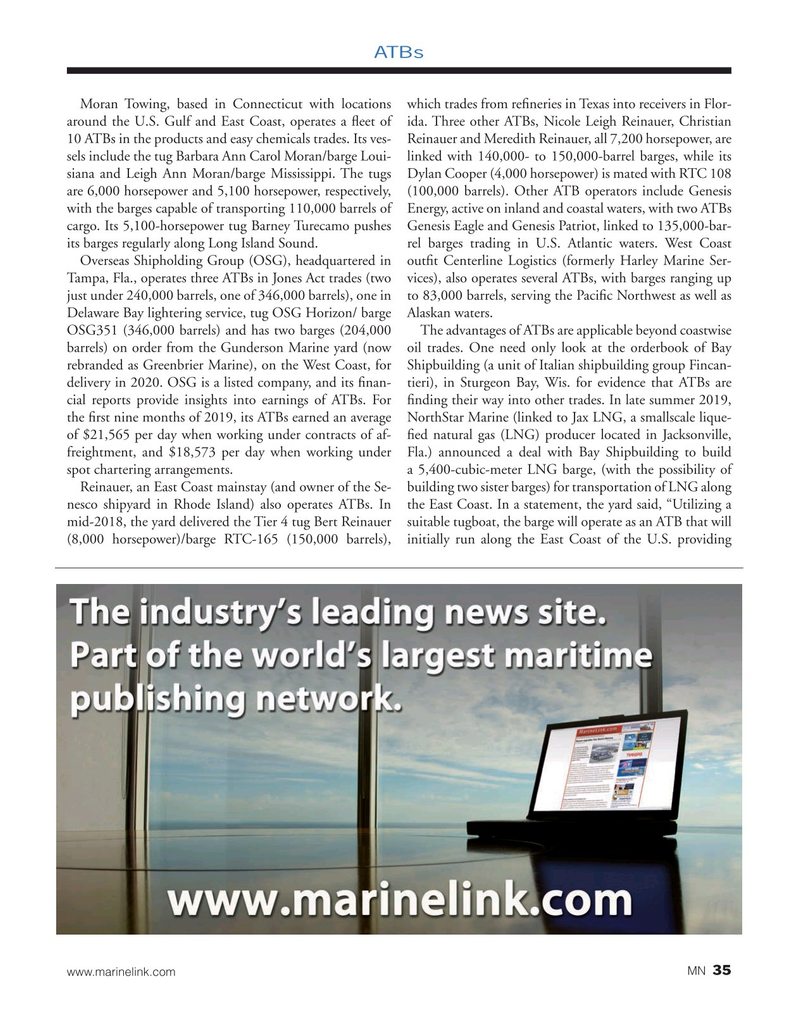 Moran Towing, based in Connecticut with locations which trades from re? neries in Texas into receivers in Flor- around the U.S. Gulf and East Coast, operates a ? eet of ida. Three other ATBs, Nicole Leigh Reinauer, Christian 10 ATBs in the products and easy chemicals trades. Its ves- Reinauer and Meredith Reinauer, all 7,200 horsepower, are sels include the tug Barbara Ann Carol Moran/barge Loui- linked with 140,000- to 150,000-barrel barges, while its siana and Leigh Ann Moran/barge Mississippi. The tugs Dylan Cooper (4,000 horsepower) is mated with RTC 108 are 6,000 horsepower and 5,100 horsepower, respectively, (100,000 barrels). Other ATB operators include Genesis with the barges capable of transporting 110,000 barrels of Energy, active on inland and coastal waters, with two ATBs cargo. Its 5,100-horsepower tug Barney Turecamo pushes Genesis Eagle and Genesis Patriot, linked to 135,000-bar- its barges regularly along Long Island Sound. rel barges trading in U.S. Atlantic waters. West Coast

OSG351 (346,000 barrels) and has two barges (204,000 The advantages of ATBs are applicable beyond coastwise barrels) on order from the Gunderson Marine yard (now oil trades. One need only look at the orderbook of Bay rebranded as Greenbrier Marine), on the West Coast, for Shipbuilding (a unit of Italian shipbuilding group Fincan- delivery in 2020. OSG is a listed company, and its ? nan- tieri), in Sturgeon Bay, Wis. for evidence that ATBs are cial reports provide insights into earnings of ATBs. For ? nding their way into other trades. In late summer 2019, the ? rst nine months of 2019, its ATBs earned an average NorthStar Marine (linked to Jax LNG, a smallscale lique- of $21,565 per day when working under contracts of af- ? ed natural gas (LNG) producer located in Jacksonville, freightment, and $18,573 per day when working under Fla.) announced a deal with Bay Shipbuilding to build spot chartering arrangements. a 5,400-cubic-meter LNG barge, (with the possibility of

Reinauer, an East Coast mainstay (and owner of the Se- building two sister barges) for transportation of LNG along nesco shipyard in Rhode Island) also operates ATBs. In the East Coast. In a statement, the yard said, “Utilizing a mid-2018, the yard delivered the Tier 4 tug Bert Reinauer suitable tugboat, the barge will operate as an ATB that will (8,000 horsepower)/barge RTC-165 (150,000 barrels), initially run along the East Coast of the U.S. providing 35 www.marinelink.com MN