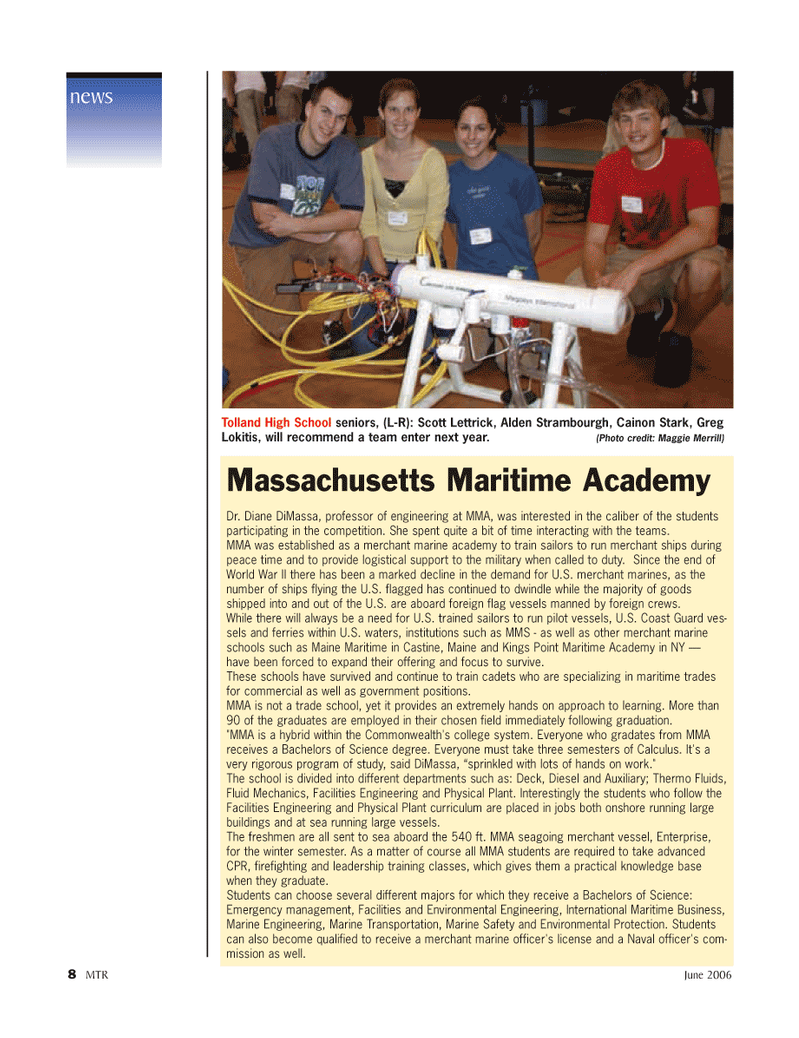 Dr. Diane DiMassa, professor of engineering at MMA, was interested in the caliber of the students participating in the competition. She spent quite a bit of time interacting with the teams.

MMA was established as a merchant marine academy to train sailors to run merchant ships during peace time and to provide logistical support to the military when called to duty. Since the end of

World War II there has been a marked decline in the demand for U.S. merchant marines, as the number of ships flying the U.S. flagged has continued to dwindle while the majority of goods shipped into and out of the U.S. are aboard foreign flag vessels manned by foreign crews.

While there will always be a need for U.S. trained sailors to run pilot vessels, U.S. Coast Guard ves- sels and ferries within U.S. waters, institutions such as MMS - as well as other merchant marine schools such as Maine Maritime in Castine, Maine and Kings Point Maritime Academy in NY — have been forced to expand their offering and focus to survive.

These schools have survived and continue to train cadets who are specializing in maritime trades for commercial as well as government positions.

MMA is not a trade school, yet it provides an extremely hands on approach to learning. More than 90 of the graduates are employed in their chosen field immediately following graduation. "MMA is a hybrid within the Commonwealth's college system. Everyone who gradates from MMA receives a Bachelors of Science degree. Everyone must take three semesters of Calculus. It's a very rigorous program of study, said DiMassa, “sprinkled with lots of hands on work."

The school is divided into different departments such as: Deck, Diesel and Auxiliary; Thermo Fluids,

Fluid Mechanics, Facilities Engineering and Physical Plant. Interestingly the students who follow the

The freshmen are all sent to sea aboard the 540 ft. MMA seagoing merchant vessel, Enterprise, for the winter semester. As a matter of course all MMA students are required to take advanced

CPR, firefighting and leadership training classes, which gives them a practical knowledge base when they graduate.

Students can choose several different majors for which they receive a Bachelors of Science: