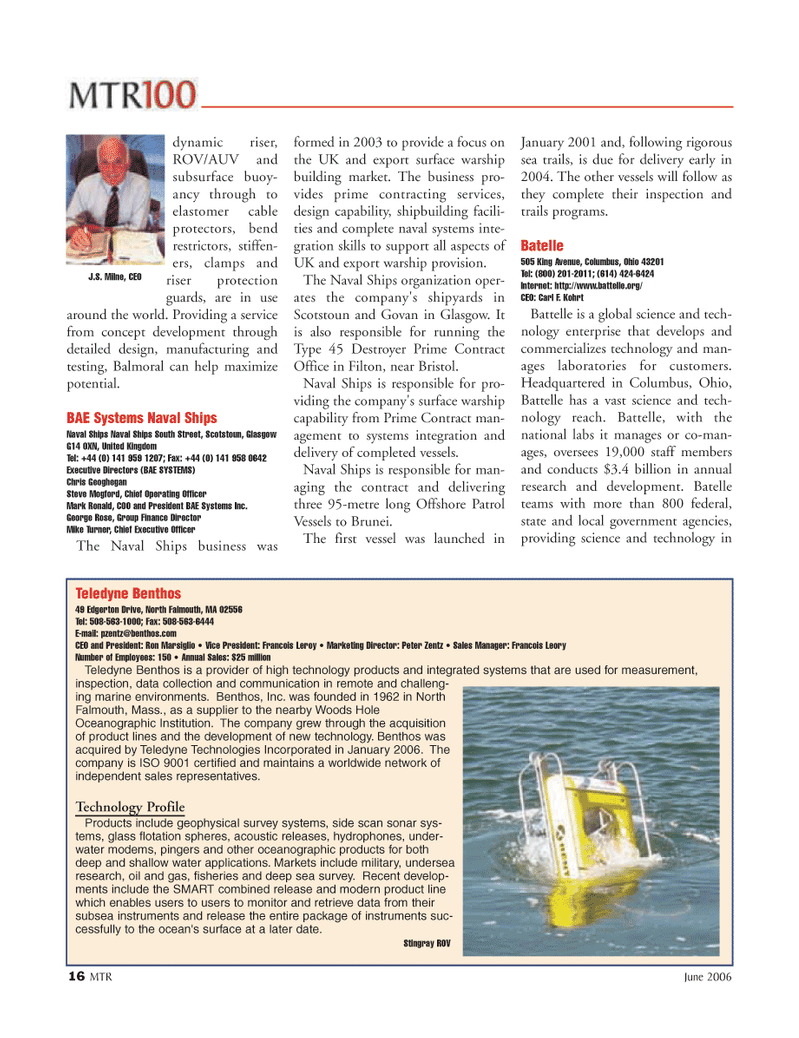 ROV/AUV and subsurface buoy- ancy through to elastomer cable protectors, bend restrictors, stiffen- ers, clamps and riser protection guards, are in use around the world. Providing a service from concept development through detailed design, manufacturing and testing, Balmoral can help maximize potential.

The Naval Ships organization oper- ates the company's shipyards in

Scotstoun and Govan in Glasgow. It is also responsible for running the

Office in Filton, near Bristol.

The first vessel was launched in

January 2001 and, following rigorous sea trails, is due for delivery early in 2004. The other vessels will follow as they complete their inspection and trails programs.

Battelle is a global science and tech- nology enterprise that develops and commercializes technology and man- ages laboratories for customers.

Battelle has a vast science and tech- nology reach. Battelle, with the national labs it manages or co-man- ages, oversees 19,000 staff members and conducts $3.4 billion in annual research and development. Batelle teams with more than 800 federal, state and local government agencies, providing science and technology in 16 MTR June 2006

Teledyne Benthos is a provider of high technology products and integrated systems that are used for measurement, inspection, data collection and communication in remote and challeng- ing marine environments. Benthos, Inc. was founded in 1962 in North

Falmouth, Mass., as a supplier to the nearby Woods Hole

Oceanographic Institution. The company grew through the acquisition of product lines and the development of new technology. Benthos was acquired by Teledyne Technologies Incorporated in January 2006. The company is ISO 9001 certified and maintains a worldwide network of independent sales representatives.

Products include geophysical survey systems, side scan sonar sys- tems, glass flotation spheres, acoustic releases, hydrophones, under- water modems, pingers and other oceanographic products for both deep and shallow water applications. Markets include military, undersea research, oil and gas, fisheries and deep sea survey. Recent develop- ments include the SMART combined release and modern product line which enables users to users to monitor and retrieve data from their subsea instruments and release the entire package of instruments suc- cessfully to the ocean's surface at a later date.