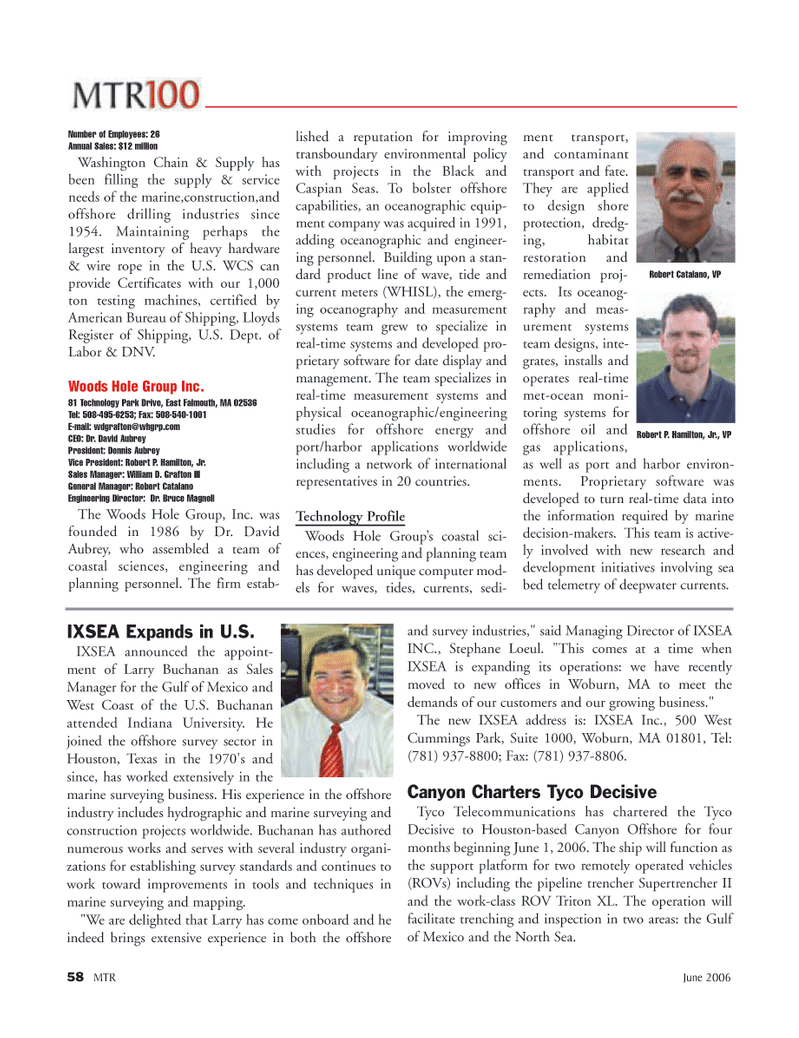 Washington Chain & Supply has been filling the supply & service needs of the marine,construction,and offshore drilling industries since 1954. Maintaining perhaps the largest inventory of heavy hardware & wire rope in the U.S. WCS can provide Certificates with our 1,000 ton testing machines, certified by

Register of Shipping, U.S. Dept. of

Aubrey, who assembled a team of coastal sciences, engineering and planning personnel. The firm estab- lished a reputation for improving transboundary environmental policy with projects in the Black and

IXSEA announced the appoint- ment of Larry Buchanan as Sales

Manager for the Gulf of Mexico and

West Coast of the U.S. Buchanan attended Indiana University. He joined the offshore survey sector in

Houston, Texas in the 1970's and since, has worked extensively in the marine surveying business. His experience in the offshore industry includes hydrographic and marine surveying and construction projects worldwide. Buchanan has authored numerous works and serves with several industry organi- zations for establishing survey standards and continues to work toward improvements in tools and techniques in marine surveying and mapping. "We are delighted that Larry has come onboard and he indeed brings extensive experience in both the offshore and survey industries," said Managing Director of IXSEA

INC., Stephane Loeul. "This comes at a time when

IXSEA is expanding its operations: we have recently moved to new offices in Woburn, MA to meet the demands of our customers and our growing business."

Tyco Telecommunications has chartered the Tyco

Decisive to Houston-based Canyon Offshore for four months beginning June 1, 2006. The ship will function as the support platform for two remotely operated vehicles (ROVs) including the pipeline trencher Supertrencher II and the work-class ROV Triton XL. The operation will facilitate trenching and inspection in two areas: the Gulf of Mexico and the North Sea.