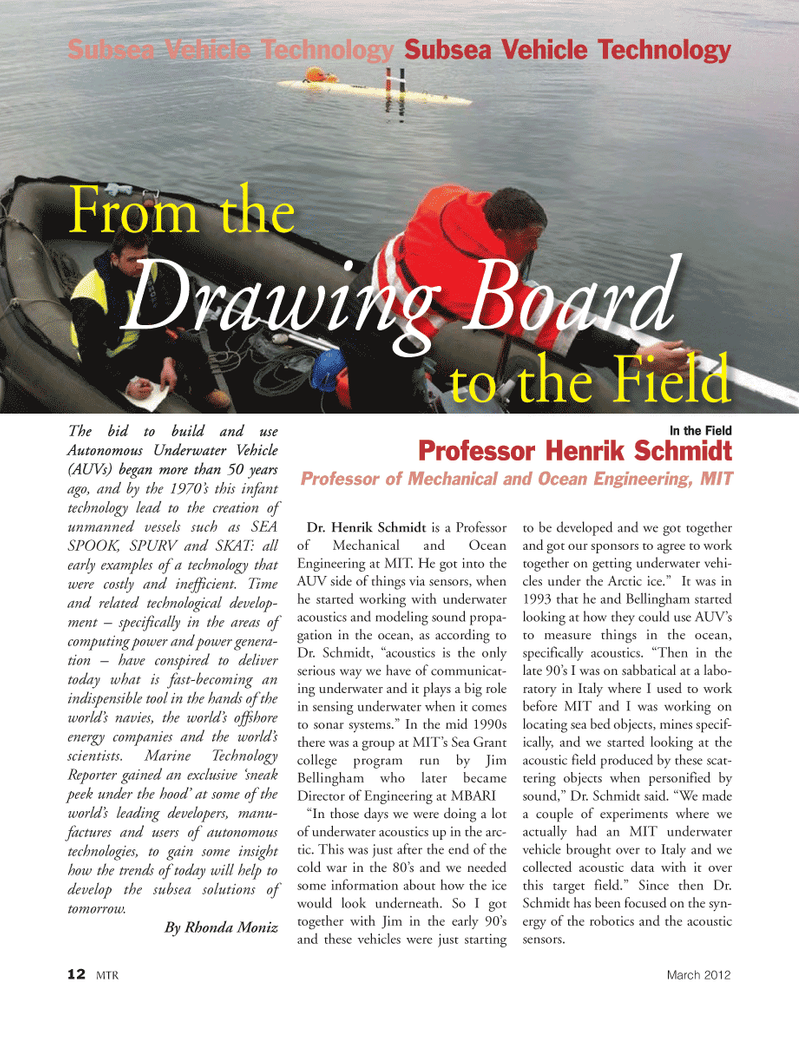 Dr. Henrik Schmidt is a Professor of Mechanical and Ocean Engineering at MIT. He got into the AUV side of things via sensors, when he started working with underwater acoustics and modeling sound propa- gation in the ocean, as according to Dr. Schmidt, ?acoustics is the only serious way we have of communicat- ing underwater and it plays a big role in sensing underwater when it comes to sonar systems.? In the mid 1990s there was a group at MIT?s Sea Grant college program run by Jim Bellingham who later became Director of Engineering at MBARI ?In those days we were doing a lot of underwater acoustics up in the arc- tic. This was just after the end of the cold war in the 80?s and we needed some information about how the ice would look underneath. So I got together with Jim in the early 90?s and these vehicles were just starting to be developed and we got together and got our sponsors to agree to work together on getting underwater vehi- cles under the Arctic ice.? It was in 1993 that he and Bellingham started looking at how they could use AUV?s to measure things in the ocean, specifically acoustics. ?Then in the late 90?s I was on sabbatical at a labo- ratory in Italy where I used to work before MIT and I was working on locating sea bed objects, mines specif-ically, and we started looking at the acoustic field produced by these scat- tering objects when personified by sound,? Dr. Schmidt said. ?We made a couple of experiments where we actually had an MIT underwater vehicle brought over to Italy and we collected acoustic data with it over this target field.? Since then Dr. Schmidt has been focused on the syn-ergy of the robotics and the acoustic sensors. 12MTRMarch 2012 The bid to build and useAutonomous Underwater Vehicle (AUVs) began more than 50 years ago, and by the 1970?s this infant technology lead to the creation of unmanned vessels such as SEA SPOOK, SPURV and SKAT: all early examples of a technology that were costly and inefficient. Time and related technological develop- ment ? specifically in the areas of computing power and power genera- tion ? have conspired to deliver today what is fast-becoming anindispensible tool in the hands of theworld?s navies, the world?s offshore energy companies and the world?s scientists. Marine Technology Reporter gained an exclusive ?sneak peek under the hood? at some of the world?s leading developers, manu- factures and users of autonomous technologies, to gain some insighthow the trends of today will help to develop the subsea solutions of tomorrow. By Rhonda Moniz In the FieldProfessor Henrik Schmidt Professor of Mechanical and Ocean Engineering, MITSubsea Vehicle Technology Subsea Vehicle Technology From the Drawing Board to the Field MTR#2 (1-17):MTR Layouts 2/21/2012 10:09 AM Page 12