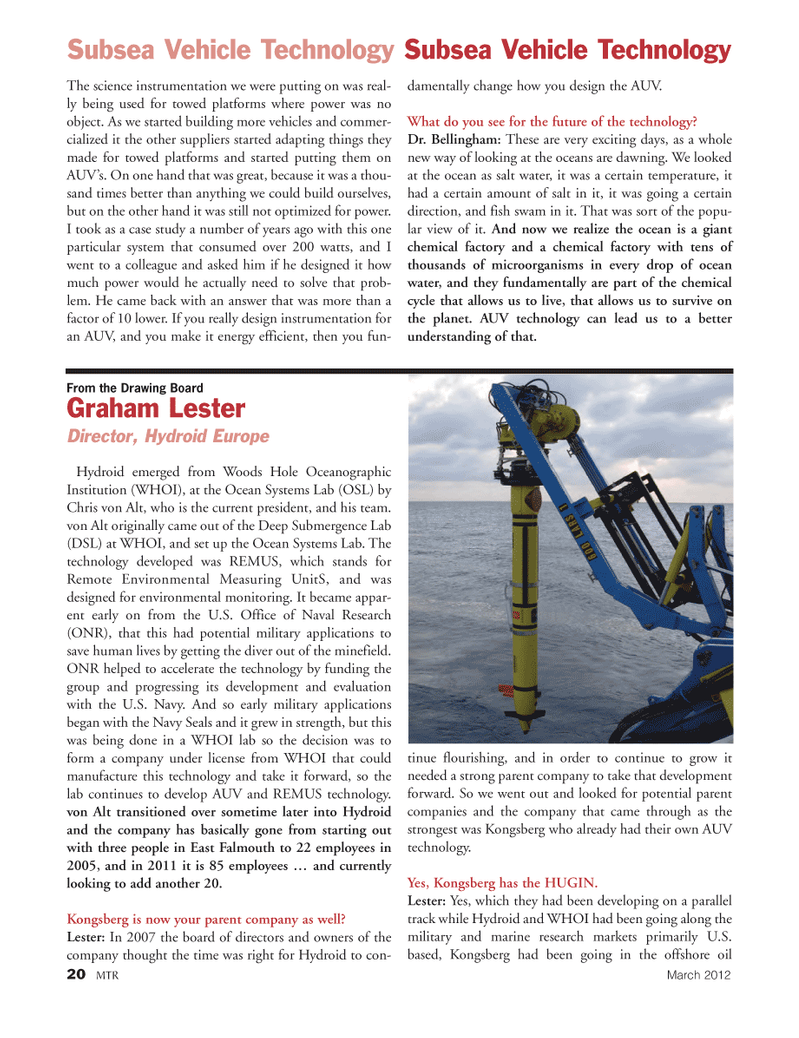 Hydroid emerged from Woods Hole Oceanographic Institution (WHOI), at the Ocean Systems Lab (OSL) by Chris von Alt, who is the current president, and his team. von Alt originally came out of the Deep Submergence Lab (DSL) at WHOI, and set up the Ocean Systems Lab. The technology developed was REMUS, which stands for Remote Environmental Measuring UnitS, and was designed for environmental monitoring. It became appar- ent early on from the U.S. Office of Naval Research (ONR), that this had potential military applications to save human lives by getting the diver out of the minefield. ONR helped to accelerate the technology by funding the group and progressing its development and evaluation with the U.S. Navy. And so early military applications began with the Navy Seals and it grew in strength, but this was being done in a WHOI lab so the decision was to form a company under license from WHOI that could manufacture this technology and take it forward, so the lab continues to develop AUV and REMUS technology. von Alt transitioned over sometime later into Hydroid and the company has basically gone from starting out with three people in East Falmouth to 22 employees in 2005, and in 2011 it is 85 employees ? and currently looking to add another 20.Kongsberg is now your parent company as well? Lester:In 2007 the board of directors and owners of the company thought the time was right for Hydroid to con- tinue flourishing, and in order to continue to grow it needed a strong parent company to take that development forward. So we went out and looked for potential parent companies and the company that came through as the strongest was Kongsberg who already had their own AUV technology. Yes, Kongsberg has the HUGIN. Lester: Yes, which they had been developing on a parallel track while Hydroid and WHOI had been going along the military and marine research markets primarily U.S. based, Kongsberg had been going in the offshore oil The science instrumentation we were putting on was real- ly being used for towed platforms where power was no object. As we started building more vehicles and commer- cialized it the other suppliers started adapting things they made for towed platforms and started putting them on AUV?s. On one hand that was great, because it was a thou- sand times better than anything we could build ourselves, but on the other hand it was still not optimized for power. I took as a case study a number of years ago with this one particular system that consumed over 200 watts, and I went to a colleague and asked him if he designed it how much power would he actually need to solve that prob- lem. He came back with an answer that was more than a factor of 10 lower. If you really design instrumentation for an AUV, and you make it energy efficient, then you fun- damentally change how you design the AUV. What do you see for the future of the technology? Dr. Bellingham: These are very exciting days, as a whole new way of looking at the oceans are dawning. We looked at the ocean as salt water, it was a certain temperature, it had a certain amount of salt in it, it was going a certain direction, and fish swam in it. That was sort of the popu- lar view of it. And now we realize the ocean is a giant chemical factory and a chemical factory with tens of thousands of microorganisms in every drop of ocean water, and they fundamentally are part of the chemical cycle that allows us to live, that allows us to survive on the planet. AUV technology can lead us to a better understanding of that. 20MTRMarch 2012 Subsea Vehicle Technology Subsea Vehicle Technology From the Drawing Board Graham LesterDirector, Hydroid EuropeMTR#2 (18-33):MTR Layouts 2/21/2012 10:44 AM Page 20