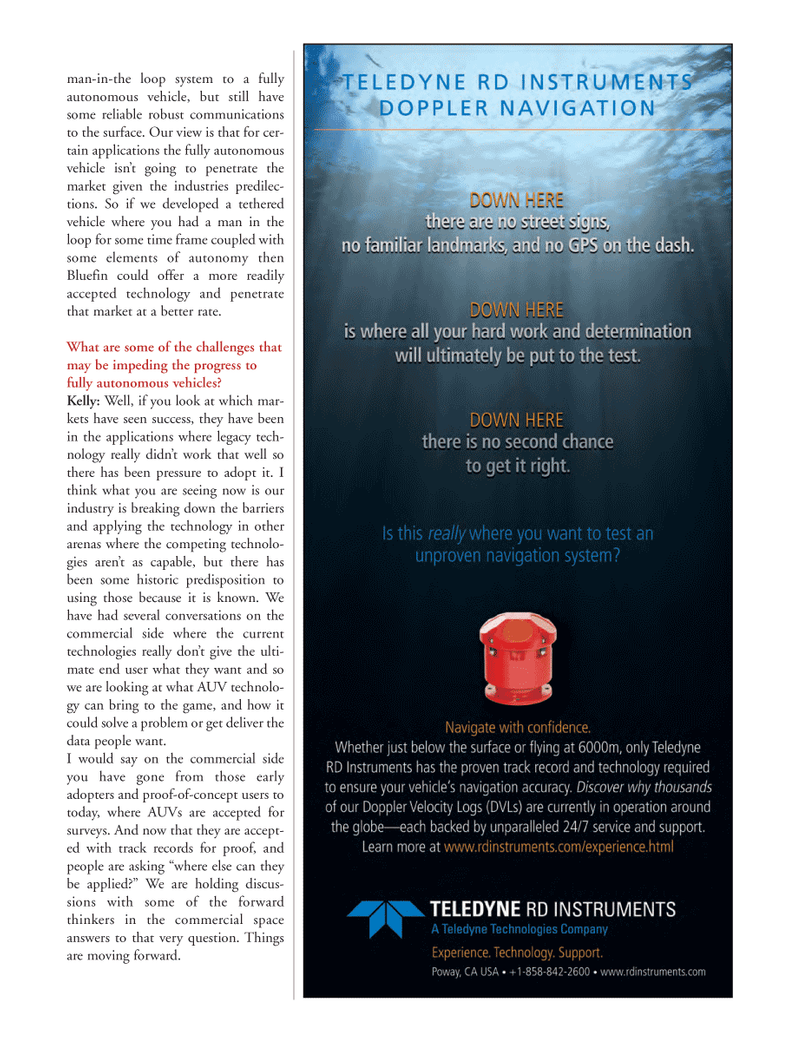 man-in-the loop system to a fullyautonomous vehicle, but still have some reliable robust communications to the surface. Our view is that for cer- tain applications the fully autonomousvehicle isn?t going to penetrate the market given the industries predilec- tions. So if we developed a tethered vehicle where you had a man in the loop for some time frame coupled withsome elements of autonomy thenBluefin could offer a more readily accepted technology and penetratethat market at a better rate. What are some of the challenges that may be impeding the progress to fully autonomous vehicles? Kelly: Well, if you look at which mar- kets have seen success, they have been in the applications where legacy tech- nology really didn?t work that well so there has been pressure to adopt it. I think what you are seeing now is our industry is breaking down the barriers and applying the technology in otherarenas where the competing technolo- gies aren?t as capable, but there has been some historic predisposition to using those because it is known. We have had several conversations on the commercial side where the current technologies really don?t give the ulti- mate end user what they want and sowe are looking at what AUV technolo- gy can bring to the game, and how it could solve a problem or get deliver the data people want. I would say on the commercial side you have gone from those early adopters and proof-of-concept users to today, where AUVs are accepted for surveys. And now that they are accept- ed with track records for proof, and people are asking ?where else can they be applied?? We are holding discus- sions with some of the forward thinkers in the commercial space answers to that very question. Things are moving forward. MTR#2 (18-33):MTR Layouts 2/21/2012 10:52 AM Page 29