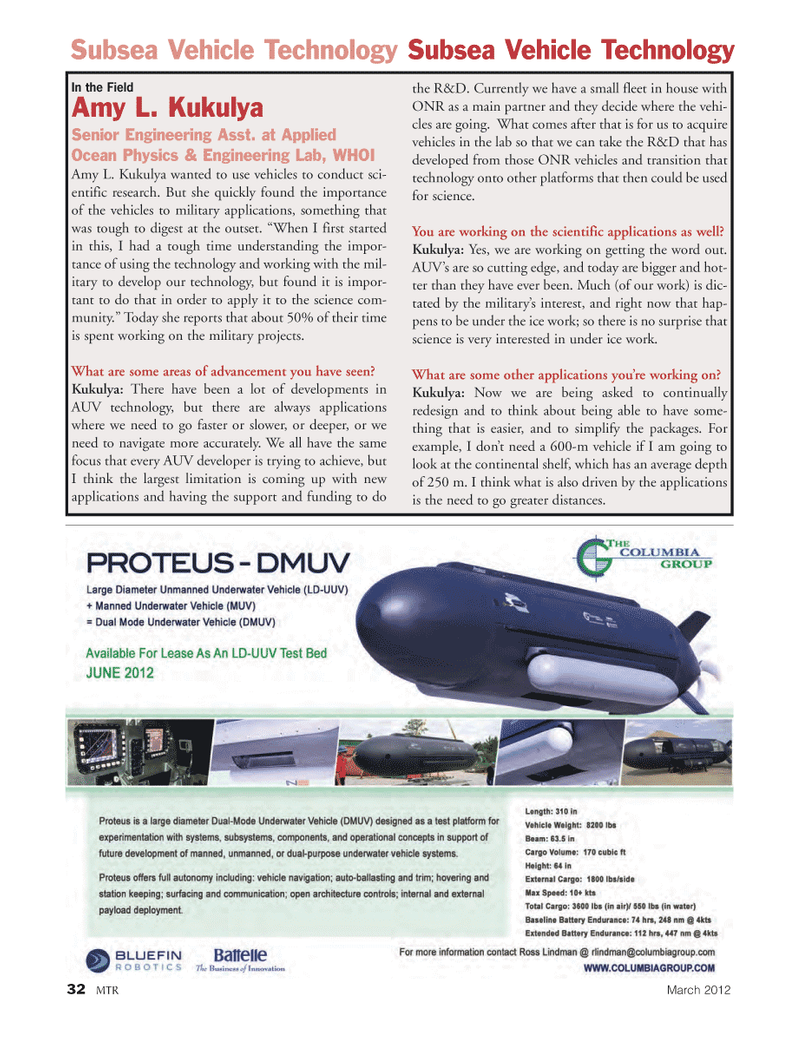 Subsea Vehicle Technology Subsea Vehicle Technology In the FieldAmy L. KukulyaSenior Engineering Asst. at AppliedOcean Physics & Engineering Lab, WHOIAmy L. Kukulya wanted to use vehicles to conduct sci- entific research. But she quickly found the importance of the vehicles to military applications, something that was tough to digest at the outset. ?When I first started in this, I had a tough time understanding the impor-tance of using the technology and working with the mil- itary to develop our technology, but found it is impor- tant to do that in order to apply it to the science com- munity.? Today she reports that about 50% of their time is spent working on the military projects. What are some areas of advancement you have seen? Kukulya: There have been a lot of developments in AUV technology, but there are always applications where we need to go faster or slower, or deeper, or we need to navigate more accurately. We all have the same focus that every AUV developer is trying to achieve, but I think the largest limitation is coming up with new applications and having the support and funding to do the R&D. Currently we have a small fleet in house with ONR as a main partner and they decide where the vehi- cles are going. What comes after that is for us to acquire vehicles in the lab so that we can take the R&D that has developed from those ONR vehicles and transition that technology onto other platforms that then could be usedfor science. You are working on the scientific applications as well? Kukulya: Yes, we are working on getting the word out. AUV?s are so cutting edge, and today are bigger and hot- ter than they have ever been. Much (of our work) is dic- tated by the military?s interest, and right now that hap- pens to be under the ice work; so there is no surprise that science is very interested in under ice work. What are some other applications you?re working on? Kukulya: Now we are being asked to continually redesign and to think about being able to have some- thing that is easier, and to simplify the packages. For example, I don?t need a 600-m vehicle if I am going to look at the continental shelf, which has an average depth of 250 m. I think what is also driven by the applications is the need to go greater distances. 32MTRMarch 2012 MTR#2 (18-33):MTR Layouts 2/23/2012 10:03 AM Page 32