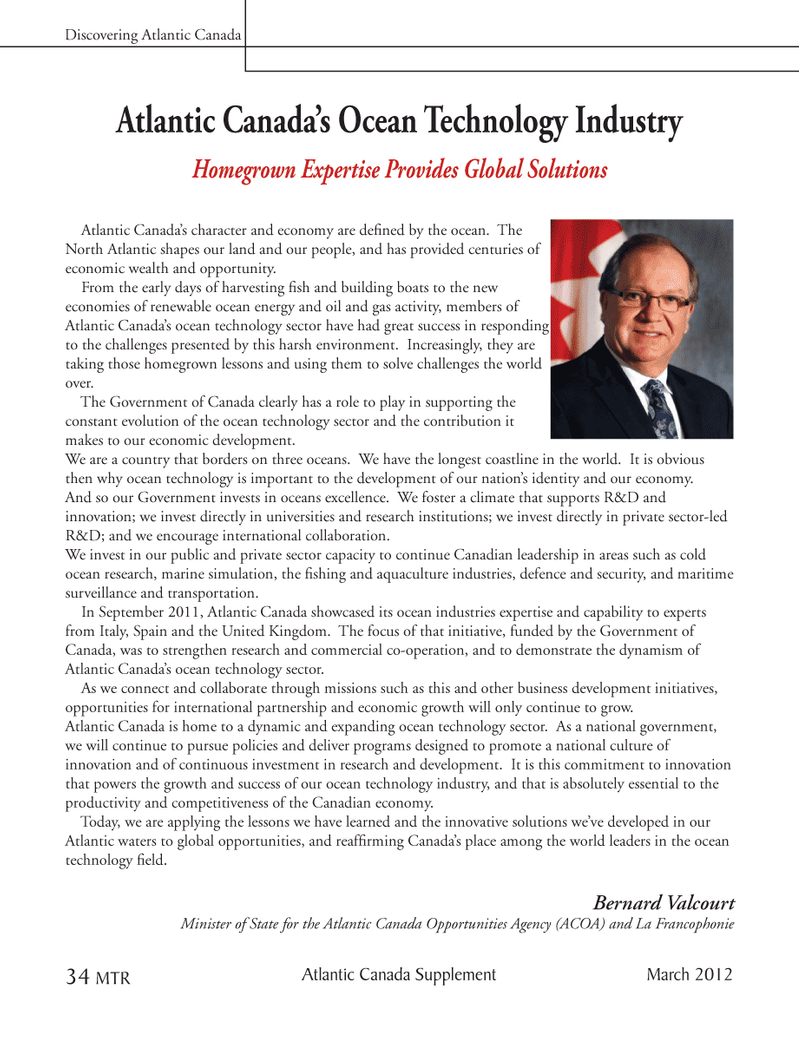 Atlantic Canada Supplement34 MTRMarch 2012 Discovering Atlantic Canada Atlantic Canada?s Ocean Technology Industry Homegrown Expertise Provides Global Solutions Atlantic Canada?s character and economy are de ned by the ocean. The North Atlantic shapes our land and our people, and has provided centuries of economic wealth and opportunity. From the early days of harvesting  sh and building boats to the new economies of renewable ocean energy and oil and gas activity, members of Atlantic Canada?s ocean technology sector have had great success in responding to the challenges presented by this harsh environment. Increasingly, they are taking those homegrown lessons and using them to solve challenges the world over. The Government of Canada clearly has a role to play in supporting the constant evolution of the ocean technology sector and the contribution it makes to our economic development. We are a country that borders on three oceans. We have the longest coastline in the world. It is obvious then why ocean technology is important to the development of our nation?s identity and our economy. And so our Government invests in oceans excellence. We foster a climate that supports R&D and innovation; we invest directly in universities and research institutions; we invest directly in private sector-led R&D and we encourage international collaboration. We invest in our public and private sector capacity to continue Canadian leadership in areas such as cold ocean research, marine simulation, the  shing and aquaculture industries, defence and security, and maritime surveillance and transportation. In September 2011, Atlantic Canada showcased its ocean industries expertise and capability to experts from Italy, Spain and the United Kingdom. The focus of that initiative, funded by the Government of Canada, was to strengthen research and commercial co-operation, and to demonstrate the dynamism of Atlantic Canada?s ocean technology sector. As we connect and collaborate through missions such as this and other business development initiatives, opportunities for international partnership and economic growth will only continue to grow. Atlantic Canada is home to a dynamic and expanding ocean technology sector. As a national government, we will continue to pursue policies and deliver programs designed to promote a national culture of innovation and of continuous investment in research and development. It is this commitment to innovation that powers the growth and success of our ocean technology industry, and that is absolutely essential to the productivity and competitiveness of the Canadian economy. Today, we are applying the lessons we have learned and the innovative solutions we?ve developed in our Atlantic waters to global opportunities, and reaf rming Canada?s place among the world leaders in the ocean technology  eld.Bernard Valcourt Minister of State for the Atlantic Canada Opportunities Agency (ACOA) and La Francophonie MTR2 Canada Supplement 32-48.indd 34MTR2 Canada Supplement 32-48.indd 342/22/2012 3:07:03 PM2/22/2012 3:07:03 PM