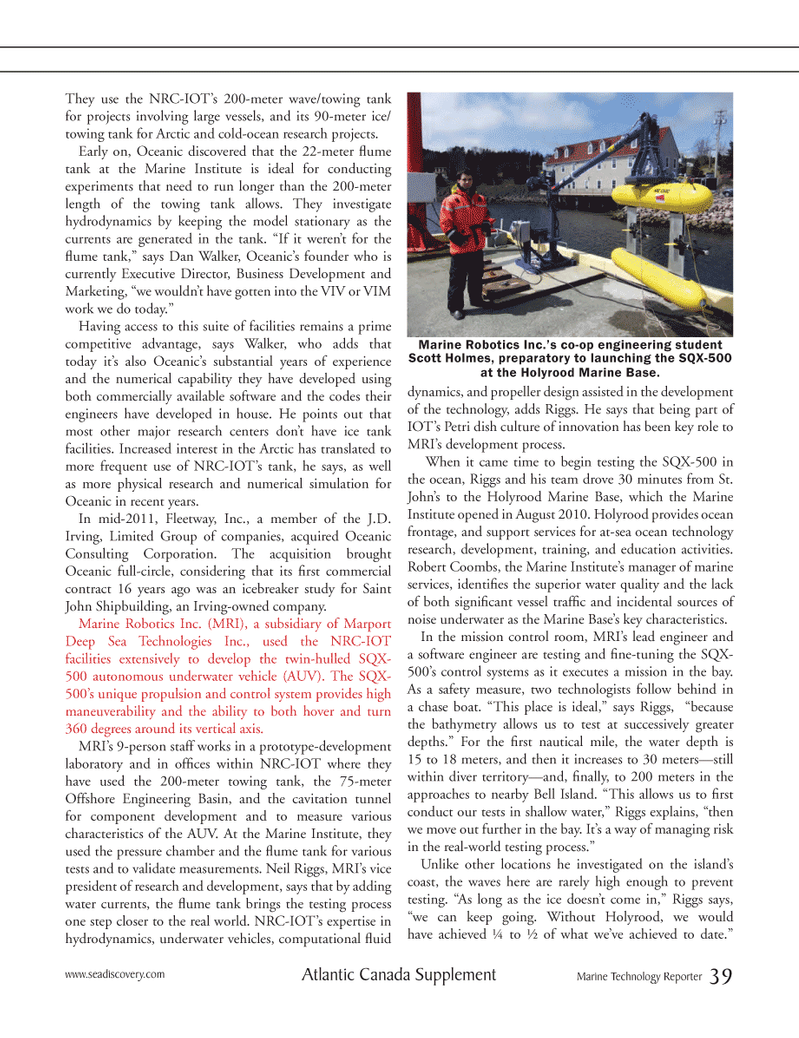 Atlantic Canada Supplementwww.seadiscovery.com Marine Technology Reporter 39They use the NRC-IOT?s 200-meter wave/towing tank for projects involving large vessels, and its 90-meter ice/ towing tank for Arctic and cold-ocean research projects. Early on, Oceanic discovered that the 22-meter  ume tank at the Marine Institute is ideal for conducting experiments that need to run longer than the 200-meter length of the towing tank allows. They investigate hydrodynamics by keeping the model stationary as the currents are generated in the tank. ?If it weren?t for the  ume tank,? says Dan Walker, Oceanic?s founder who is currently Executive Director, Business Development and Marketing, ?we wouldn?t have gotten into the VIV or VIM work we do today.? Having access to this suite of facilities remains a prime competitive advantage, says Walker, who adds that today it?s also Oceanic?s substantial years of experience and the numerical capability they have developed using both commercially available software and the codes their engineers have developed in house. He points out that most other major research centers don?t have ice tank facilities. Increased interest in the Arctic has translated to more frequent use of NRC-IOT?s tank, he says, as well as more physical research and numerical simulation for Oceanic in recent years. In mid-2011, Fleetway, Inc., a member of the J.D. Irving, Limited Group of companies, acquired Oceanic Consulting Corporation. The acquisition brought Oceanic full-circle, considering that its  rst commercial contract 16 years ago was an icebreaker study for Saint John Shipbuilding, an Irving-owned company. Marine Robotics Inc. (MRI), a subsidiary of Marport Deep Sea Technologies Inc., used the NRC-IOT facilities extensively to develop the twin-hulled SQX- 500 autonomous underwater vehicle (AUV). The SQX- 500?s unique propulsion and control system provides high maneuverability and the ability to both hover and turn 360 degrees around its vertical axis. MRI?s 9-person staff works in a prototype-development laboratory and in of ces within NRC-IOT where they have used the 200-meter towing tank, the 75-meter Offshore Engineering Basin, and the cavitation tunnel for component development and to measure various characteristics of the AUV. At the Marine Institute, they used the pressure chamber and the  ume tank for various tests and to validate measurements. Neil Riggs, MRI?s vice president of research and development, says that by adding water currents, the  ume tank brings the testing process one step closer to the real world. NRC-IOT?s expertise in hydrodynamics, underwater vehicles, computational  uid dynamics, and propeller design assisted in the development of the technology, adds Riggs. He says that being part of IOT?s Petri dish culture of innovation has been key role to MRI?s development process. When it came time to begin testing the SQX-500 in the ocean, Riggs and his team drove 30 minutes from St. John?s to the Holyrood Marine Base, which the Marine Institute opened in August 2010. Holyrood provides ocean frontage, and support services for at-sea ocean technology research, development, training, and education activities. Robert Coombs, the Marine Institute?s manager of marine services, identi es the superior water quality and the lack of both signi cant vessel traf c and incidental sources of noise underwater as the Marine Base?s key characteristics. In the mission control room, MRI?s lead engineer and a software engineer are testing and  ne-tuning the SQX- 500?s control systems as it executes a mission in the bay. As a safety measure, two technologists follow behind in a chase boat. ?This place is ideal,? says Riggs, ?because the bathymetry allows us to test at successively greater depths.? For the  rst nautical mile, the water depth is 15 to 18 meters, and then it increases to 30 meters?still within diver territory?and,  nally, to 200 meters in the approaches to nearby Bell Island. ?This allows us to  rst conduct our tests in shallow water,? Riggs explains, ?then we move out further in the bay. It?s a way of managing risk in the real-world testing process.? Unlike other locations he investigated on the island?s coast, the waves here are rarely high enough to prevent testing. ?As long as the ice doesn?t come in,? Riggs says, ?we can keep going. Without Holyrood, we would have achieved ¼ to ½ of what we?ve achieved to date.? Marine Robotics Inc.?s co-op engineering student Scott Holmes, preparatory to launching the SQX-500 at the Holyrood Marine Base.MTR2 Canada Supplement 32-48.indd 39MTR2 Canada Supplement 32-48.indd 392/22/2012 3:09:37 PM2/22/2012 3:09:37 PM