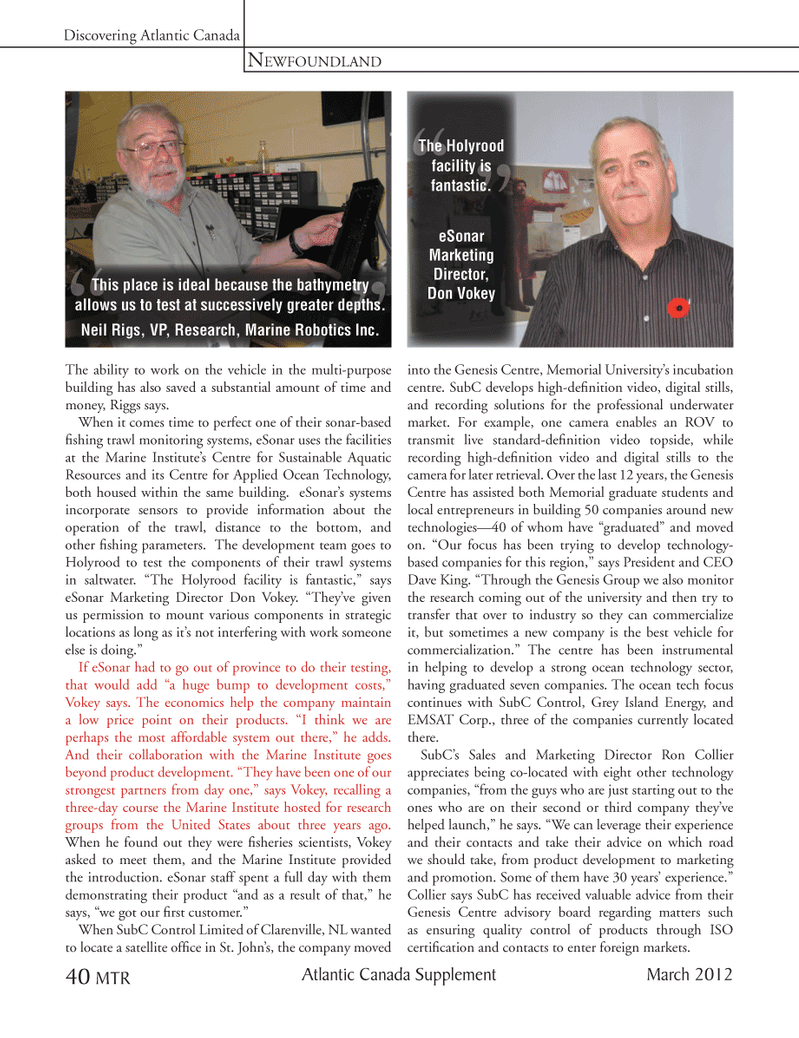 Atlantic Canada Supplement40 MTRMarch 2012 Discovering Atlantic Canada NEWFOUNDLAND The ability to work on the vehicle in the multi-purpose building has also saved a substantial amount of time and money, Riggs says. When it comes time to perfect one of their sonar-based Þ shing trawl monitoring systems, eSonar uses the facilities at the Marine InstituteÕs Centre for Sustainable Aquatic Resources and its Centre for Applied Ocean Technology, both housed within the same building. eSonarÕs systems incorporate sensors to provide information about the operation of the trawl, distance to the bottom, and other Þ shing parameters. The development team goes to Holyrood to test the components of their trawl systems in saltwater. ÒThe Holyrood facility is fantastic,Ó says eSonar Marketing Director Don Vokey. ÒTheyÕve given us permission to mount various components in strategic locations as long as itÕs not interfering with work someone else is doing.Ó If eSonar had to go out of province to do their testing, that would add Òa huge bump to development costs,Ó Vokey says. The economics help the company maintain a low price point on their products. ÒI think we are perhaps the most affordable system out there,Ó he adds. And their collaboration with the Marine Institute goes beyond product development. ÒThey have been one of our strongest partners from day one,Ó says Vokey, recalling a three-day course the Marine Institute hosted for research groups from the United States about three years ago. When he found out they were Þ sheries scientists, Vokey asked to meet them, and the Marine Institute provided the introduction. eSonar staff spent a full day with them demonstrating their product Òand as a result of that,Ó he says, Òwe got our Þ rst customer.Ó When SubC Control Limited of Clarenville, NL wanted to locate a satellite ofÞ ce in St. JohnÕs, the company moved into the Genesis Centre, Memorial UniversityÕs incubation centre. SubC develops high-deÞ nition video, digital stills, and recording solutions for the professional underwater market. For example, one camera enables an ROV to transmit live standard-deÞ nition video topside, while recording high-deÞ nition video and digital stills to the camera for later retrieval. Over the last 12 years, the Genesis Centre has assisted both Memorial graduate students and local entrepreneurs in building 50 companies around new technologiesÑ40 of whom have ÒgraduatedÓ and moved on. ÒOur focus has been trying to develop technology- based companies for this region,Ó says President and CEO Dave King. ÒThrough the Genesis Group we also monitor the research coming out of the university and then try to transfer that over to industry so they can commercialize it, but sometimes a new company is the best vehicle for commercialization.Ó The centre has been instrumental in helping to develop a strong ocean technology sector, having graduated seven companies. The ocean tech focus continues with SubC Control, Grey Island Energy, and EMSAT Corp., three of the companies currently located there. SubCÕs Sales and Marketing Director Ron Collier appreciates being co-located with eight other technology companies, Òfrom the guys who are just starting out to the ones who are on their second or third company theyÕve helped launch,Ó he says. ÒWe can leverage their experience and their contacts and take their advice on which road we should take, from product development to marketing and promotion. Some of them have 30 yearsÕ experience.Ó Collier says SubC has received valuable advice from their Genesis Centre advisory board regarding matters such as ensuring quality control of products through ISO certiÞ cation and contacts to enter foreign markets. This place is ideal because the bathymetry allows us to test at successively greater depths.Neil Rigs, VP, Research, Marine Robotics Inc. try tryepths.ptsThThThe Holyrood facility is fantastic.eSonar Marketing Director, Don Vokey is isic.c.The The MTR2 Canada Supplement 32-48.indd 40MTR2 Canada Supplement 32-48.indd 402/22/2012 3:10:02 PM2/22/2012 3:10:02 PM