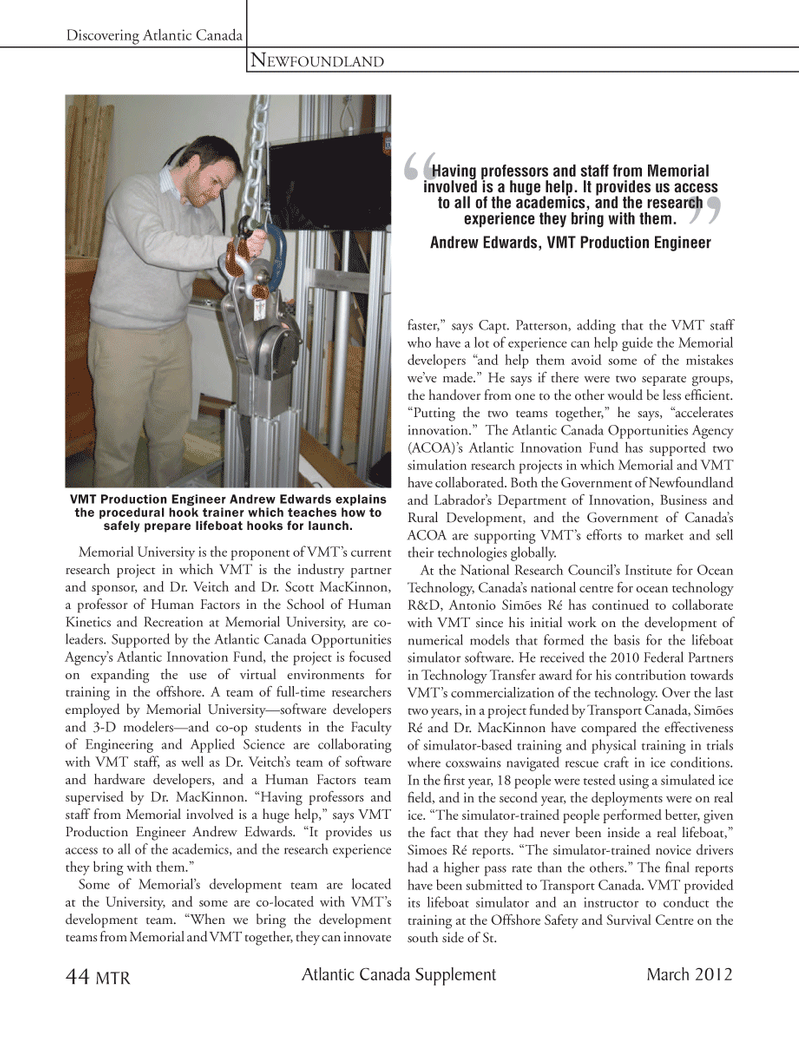 Atlantic Canada SupplementMemorial University is the proponent of VMT?s current research project in which VMT is the industry partner and sponsor, and Dr. Veitch and Dr. Scott MacKinnon, a professor of Human Factors in the School of Human Kinetics and Recreation at Memorial University, are co- leaders. Supported by the Atlantic Canada Opportunities Agency?s Atlantic Innovation Fund, the project is focused on expanding the use of virtual environments for training in the offshore. A team of full-time researchers employed by Memorial University?software developers and 3-D modelers?and co-op students in the Faculty of Engineering and Applied Science are collaborating with VMT staff, as well as Dr. Veitch?s team of software and hardware developers, and a Human Factors team supervised by Dr. MacKinnon. ?Having professors and staff from Memorial involved is a huge help,? says VMT Production Engineer Andrew Edwards. ?It provides us access to all of the academics, and the research experience they bring with them.?Some of Memorial?s development team are located at the University, and some are co-located with VMT?s development team. ?When we bring the development teams from Memorial and VMT together, they can innovate faster,? says Capt. Patterson, adding that the VMT staff who have a lot of experience can help guide the Memorial developers ?and help them avoid some of the mistakes we?ve made.? He says if there were two separate groups, the handover from one to the other would be less ef cient. ?Putting the two teams together,? he says, ?accelerates innovation.? The Atlantic Canada Opportunities Agency (ACOA)?s Atlantic Innovation Fund has supported two simulation research projects in which Memorial and VMT have collaborated. Both the Government of Newfoundland and Labrador?s Department of Innovation, Business and Rural Development, and the Government of Canada?s ACOA are supporting VMT?s efforts to market and sell their technologies globally. At the National Research Council?s Institute for Ocean Technology, Canada?s national centre for ocean technology R&D, Antonio Simões Ré has continued to collaborate with VMT since his initial work on the development of numerical models that formed the basis for the lifeboat simulator software. He received the 2010 Federal Partners in Technology Transfer award for his contribution towards VMT?s commercialization of the technology. Over the last two years, in a project funded by Transport Canada, Simões Ré and Dr. MacKinnon have compared the effectiveness of simulator-based training and physical training in trials where coxswains navigated rescue craft in ice conditions. In the  rst year, 18 people were tested using a simulated ice  eld, and in the second year, the deployments were on real ice. ?The simulator-trained people performed better, given the fact that they had never been inside a real lifeboat,? Simoes Ré reports. ?The simulator-trained novice drivers had a higher pass rate than the others.? The  nal reports have been submitted to Transport Canada. VMT provided its lifeboat simulator and an instructor to conduct the training at the Offshore Safety and Survival Centre on the south side of St. 44 MTRMarch 2012 Discovering Atlantic Canada NEWFOUNDLAND Having professors and staff from Memorial involved is a huge help. It provides us access to all of the academics, and the research experience they bring with them.Andrew Edwards, VMT Production Engineer?rch rch?HHVMT Production Engineer Andrew Edwards explains the procedural hook trainer which teaches how to safely prepare lifeboat hooks for launch. MTR2 Canada Supplement 32-48.indd 44MTR2 Canada Supplement 32-48.indd 442/22/2012 3:59:25 PM2/22/2012 3:59:25 PM