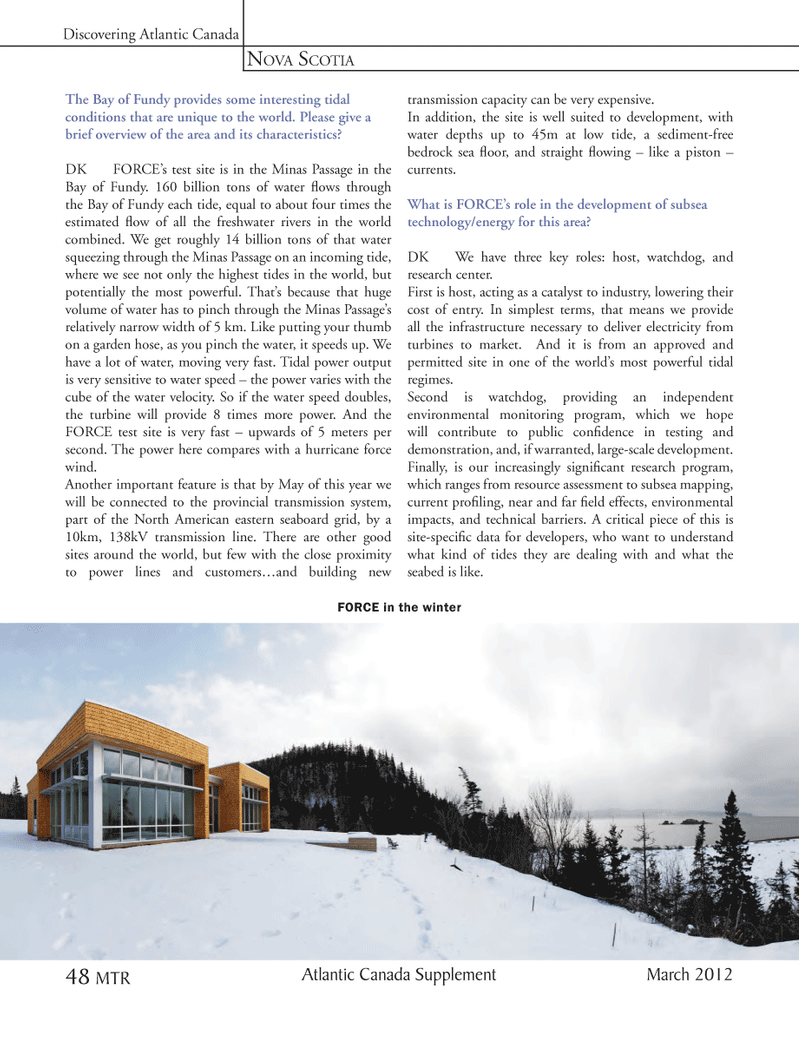 Atlantic Canada Supplement48 MTRMarch 2012 The Bay of Fundy provides some interesting tidal conditions that are unique to the world. Please give a brief overview of the area and its characteristics? DK FORCE?s test site is in the Minas Passage in the Bay of Fundy. 160 billion tons of water  ows through the Bay of Fundy each tide, equal to about four times the estimated  ow of all the freshwater rivers in the world combined. We get roughly 14 billion tons of that water squeezing through the Minas Passage on an incoming tide, where we see not only the highest tides in the world, but potentially the most powerful. That?s because that huge volume of water has to pinch through the Minas Passage?s relatively narrow width of 5 km. Like putting your thumb on a garden hose, as you pinch the water, it speeds up. We have a lot of water, moving very fast. Tidal power output is very sensitive to water speed ? the power varies with the cube of the water velocity. So if the water speed doubles, the turbine will provide 8 times more power. And the FORCE test site is very fast ? upwards of 5 meters per second. The power here compares with a hurricane force wind.Another important feature is that by May of this year we will be connected to the provincial transmission system, part of the North American eastern seaboard grid, by a 10km, 138kV transmission line. There are other good sites around the world, but few with the close proximity to power lines and customers?and building new transmission capacity can be very expensive. In addition, the site is well suited to development, with water depths up to 45m at low tide, a sediment-free bedrock sea  oor, and straight  owing ? like a piston ? currents. What is FORCE?s role in the development of subsea technology/energy for this area? DK We have three key roles: host, watchdog, and research center. First is host, acting as a catalyst to industry, lowering their cost of entry. In simplest terms, that means we provide all the infrastructure necessary to deliver electricity from turbines to market. And it is from an approved and permitted site in one of the world?s most powerful tidal regimes. Second is watchdog, providing an independent environmental monitoring program, which we hope will contribute to public con dence in testing and demonstration, and, if warranted, large-scale development. Finally, is our increasingly signi cant research program, which ranges from resource assessment to subsea mapping, current pro ling, near and far  eld effects, environmental impacts, and technical barriers. A critical piece of this is site-speci c data for developers, who want to understand what kind of tides they are dealing with and what the seabed is like.Discovering Atlantic Canada NOVA SCOTIA FORCE in the winter MTR2 Canada Supplement 32-48.indd 48MTR2 Canada Supplement 32-48.indd 482/23/2012 9:50:32 AM2/23/2012 9:50:32 AM