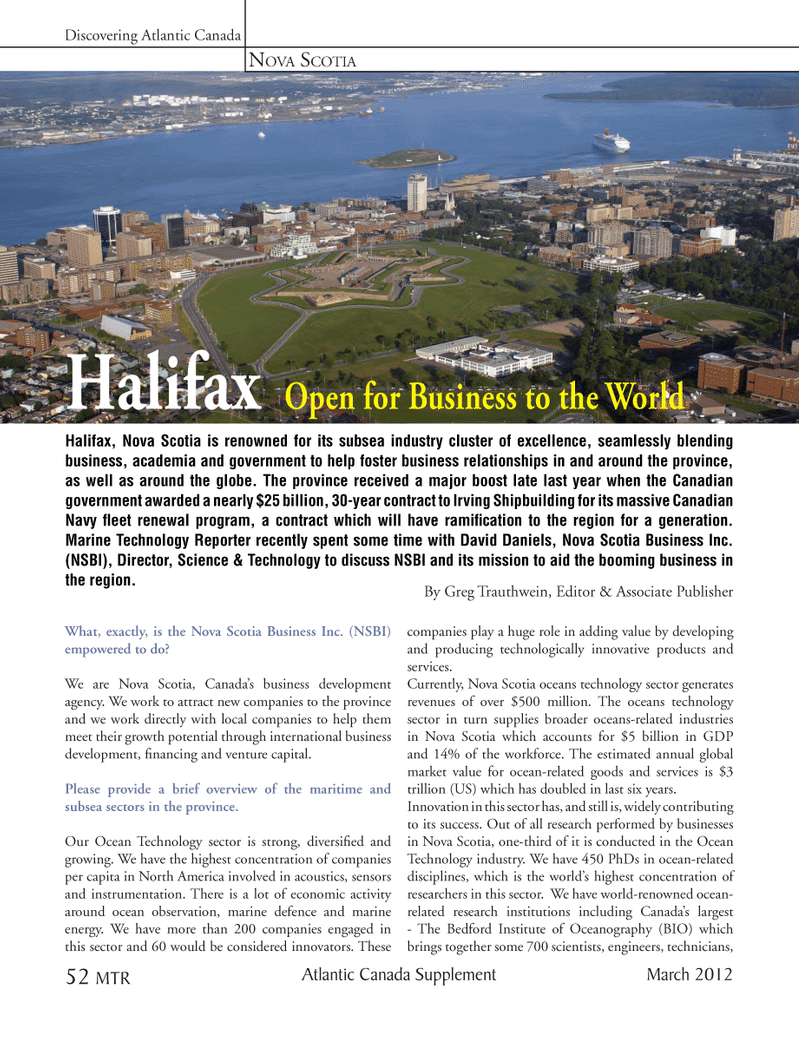 Atlantic Canada Supplement52 MTRMarch 2012 Halifax Open for Business to the World What, exactly, is the Nova Scotia Business Inc. (NSBI) empowered to do? We are Nova Scotia, Canada?s business development agency. We work to attract new companies to the province and we work directly with local companies to help them meet their growth potential through international business development,  nancing and venture capital. Please provide a brief overview of the maritime and subsea sectors in the province. Our Ocean Technology sector is strong, diversi ed and growing. We have the highest concentration of companies per capita in North America involved in acoustics, sensors and instrumentation. There is a lot of economic activity around ocean observation, marine defence and marine energy. We have more than 200 companies engaged in this sector and 60 would be considered innovators. These companies play a huge role in adding value by developing and producing technologically innovative products and services. Currently, Nova Scotia oceans technology sector generates revenues of over $500 million. The oceans technology sector in turn supplies broader oceans-related industries in Nova Scotia which accounts for $5 billion in GDP and 14% of the workforce. The estimated annual global market value for ocean-related goods and services is $3 trillion (US) which has doubled in last six years. Innovation in this sector has, and still is, widely contributing to its success. Out of all research performed by businesses in Nova Scotia, one-third of it is conducted in the Ocean Technology industry. We have 450 PhDs in ocean-related disciplines, which is the world?s highest concentration of researchers in this sector. We have world-renowned ocean- related research institutions including Canada?s largest - The Bedford Institute of Oceanography (BIO) which brings together some 700 scientists, engineers, technicians, By Greg Trauthwein, Editor & Associate Publisher Discovering Atlantic Canada NOVA SCOTIA Halifax, Nova Scotia is renowned for its subsea industry cluster of excellence, seamlessly blending business, academia and government to help foster business relationships in and around the province, as well as around the globe. The province received a major boost late last year when the Canadian government awarded a nearly $25 billion, 30-year contract to Irving Shipbuilding for its massive Canadian Navy ß eet renewal program, a contract which will have ramiÞ cation to the region for a generation. Marine Technology Reporter recently spent some time with David Daniels, Nova Scotia Business Inc. (NSBI), Director, Science & Technology to discuss NSBI and its mission to aid the booming business in the region.MTR2 Canada Supplement 49-64.indd 52MTR2 Canada Supplement 49-64.indd 522/23/2012 10:18:58 AM2/23/2012 10:18:58 AM