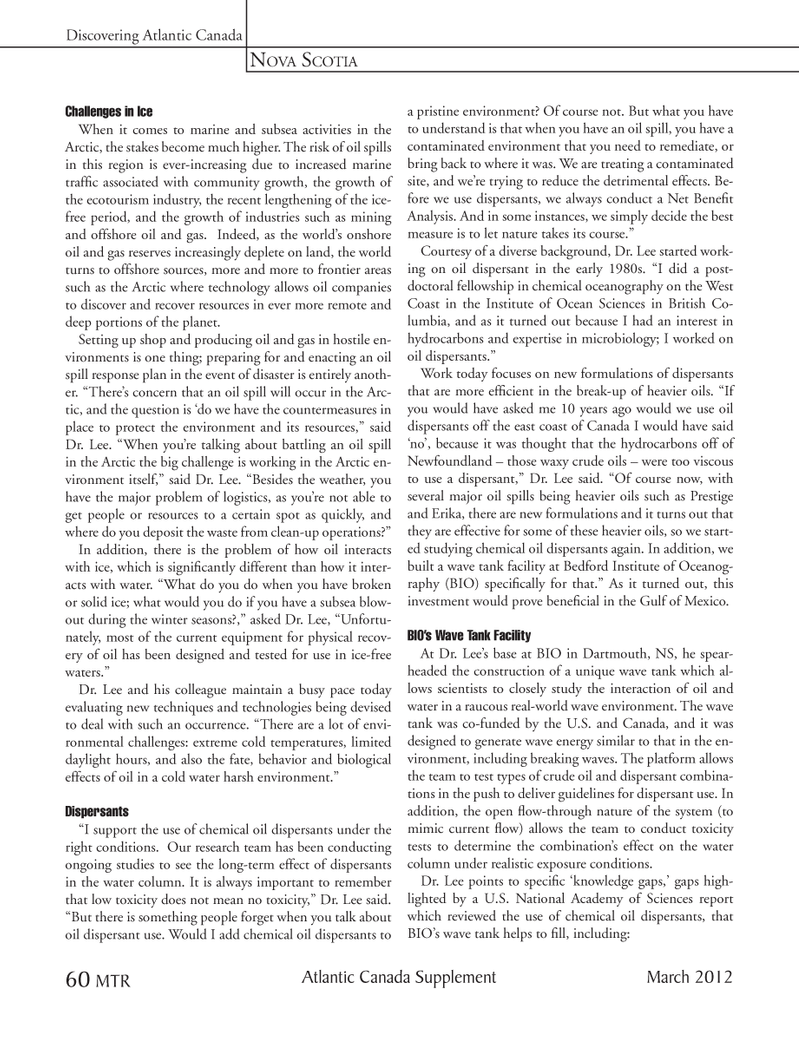 Challenges in IceWhen it comes to marine and subsea activities in the Arctic, the stakes become much higher. The risk of oil spills in this region is ever-increasing due to increased marine trafÞ c associated with community growth, the growth of the ecotourism industry, the recent lengthening of the ice- free period, and the growth of industries such as mining and offshore oil and gas. Indeed, as the worldÕs onshore oil and gas reserves increasingly deplete on land, the world turns to offshore sources, more and more to frontier areas such as the Arctic where technology allows oil companies to discover and recover resources in ever more remote and deep portions of the planet. Setting up shop and producing oil and gas in hostile en- vironments is one thing; preparing for and enacting an oil spill response plan in the event of disaster is entirely anoth- er. ÒThereÕs concern that an oil spill will occur in the Arc- tic, and the question is Ôdo we have the countermeasures in place to protect the environment and its resources,Ó said Dr. Lee. ÒWhen youÕre talking about battling an oil spill in the Arctic the big challenge is working in the Arctic en- vironment itself,Ó said Dr. Lee. ÒBesides the weather, you have the major problem of logistics, as youÕre not able to get people or resources to a certain spot as quickly, and where do you deposit the waste from clean-up operations?Ó In addition, there is the problem of how oil interacts with ice, which is signiÞ cantly different than how it inter- acts with water. ÒWhat do you do when you have broken or solid ice; what would you do if you have a subsea blow- out during the winter seasons?,Ó asked Dr. Lee, ÒUnfortu- nately, most of the current equipment for physical recov- ery of oil has been designed and tested for use in ice-free waters.ÓDr. Lee and his colleague maintain a busy pace today evaluating new techniques and technologies being devised to deal with such an occurrence. ÒThere are a lot of envi- ronmental challenges: extreme cold temperatures, limited daylight hours, and also the fate, behavior and biological effects of oil in a cold water harsh environment.Ó DispersantsÒI support the use of chemical oil dispersants under the right conditions. Our research team has been conducting ongoing studies to see the long-term effect of dispersants in the water column. It is always important to remember that low toxicity does not mean no toxicity,Ó Dr. Lee said. ÒBut there is something people forget when you talk about oil dispersant use. Would I add chemical oil dispersants to a pristine environment? Of course not. But what you have to understand is that when you have an oil spill, you have a contaminated environment that you need to remediate, or bring back to where it was. We are treating a contaminated site, and weÕre trying to reduce the detrimental effects. Be- fore we use dispersants, we always conduct a Net BeneÞ t Analysis. And in some instances, we simply decide the best measure is to let nature takes its course.Ó Courtesy of a diverse background, Dr. Lee started work- ing on oil dispersant in the early 1980s. ÒI did a post-doctoral fellowship in chemical oceanography on the West Coast in the Institute of Ocean Sciences in British Co- lumbia, and as it turned out because I had an interest in hydrocarbons and expertise in microbiology; I worked on oil dispersants.ÓWork today focuses on new formulations of dispersants that are more efÞ cient in the break-up of heavier oils. ÒIf you would have asked me 10 years ago would we use oil dispersants off the east coast of Canada I would have said ÔnoÕ, because it was thought that the hydrocarbons off of Newfoundland Ð those waxy crude oils Ð were too viscous to use a dispersant,Ó Dr. Lee said. ÒOf course now, with several major oil spills being heavier oils such as Prestige and Erika, there are new formulations and it turns out that they are effective for some of these heavier oils, so we start- ed studying chemical oil dispersants again. In addition, we built a wave tank facility at Bedford Institute of Oceanog- raphy (BIO) speciÞ cally for that.Ó As it turned out, this investment would prove beneÞ cial in the Gulf of Mexico. BIO?s Wave Tank Facility At Dr. LeeÕs base at BIO in Dartmouth, NS, he spear- headed the construction of a unique wave tank which al- lows scientists to closely study the interaction of oil and water in a raucous real-world wave environment. The wave tank was co-funded by the U.S. and Canada, and it was designed to generate wave energy similar to that in the en- vironment, including breaking waves. The platform allows the team to test types of crude oil and dispersant combina- tions in the push to deliver guidelines for dispersant use. In addition, the open ß ow-through nature of the system (to mimic current ß ow) allows the team to conduct toxicity tests to determine the combinationÕs effect on the water column under realistic exposure conditions. Dr. Lee points to speciÞ c Ôknowledge gaps,Õ gaps high- lighted by a U.S. National Academy of Sciences report which reviewed the use of chemical oil dispersants, that BIOÕs wave tank helps to Þ ll, including: Discovering Atlantic Canada NOVA SCOTIA Atlantic Canada Supplement60 MTRMarch 2012 MTR2 Canada Supplement 49-64.indd 60MTR2 Canada Supplement 49-64.indd 602/23/2012 10:39:38 AM2/23/2012 10:39:38 AM