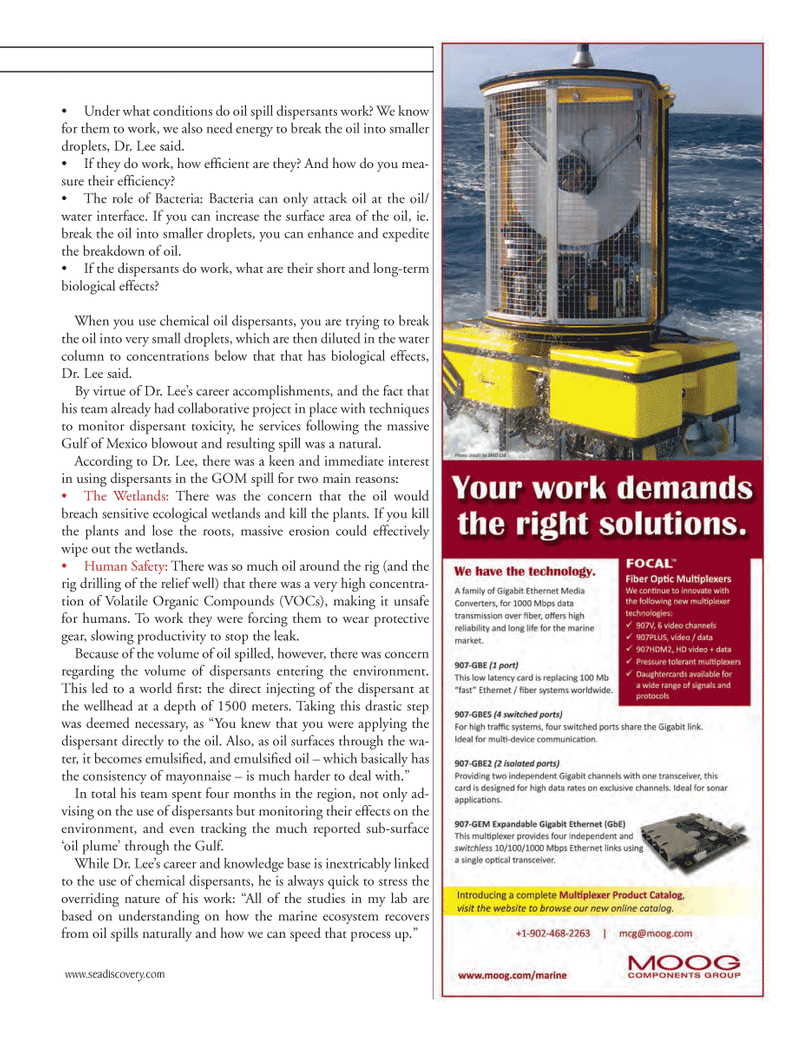 www.seadiscovery.com  Under what conditions do oil spill dispersants work? We know for them to work, we also need energy to break the oil into smaller droplets, Dr. Lee said.  If they do work, how ef cient are they? And how do you mea- sure their ef ciency?  The role of Bacteria: Bacteria can only attack oil at the oil/ water interface. If you can increase the surface area of the oil, ie. break the oil into smaller droplets, you can enhance and expedite the breakdown of oil.  If the dispersants do work, what are their short and long-term biological effects?When you use chemical oil dispersants, you are trying to break the oil into very small droplets, which are then diluted in the water column to concentrations below that that has biological effects, Dr. Lee said. By virtue of Dr. Lee?s career accomplishments, and the fact that his team already had collaborative project in place with techniques to monitor dispersant toxicity, he services following the massive Gulf of Mexico blowout and resulting spill was a natural. According to Dr. Lee, there was a keen and immediate interest in using dispersants in the GOM spill for two main reasons:  The Wetlands: There was the concern that the oil would breach sensitive ecological wetlands and kill the plants. If you kill the plants and lose the roots, massive erosion could effectively wipe out the wetlands.  Human Safety: There was so much oil around the rig (and the rig drilling of the relief well) that there was a very high concentra- tion of Volatile Organic Compounds (VOCs), making it unsafe for humans. To work they were forcing them to wear protective gear, slowing productivity to stop the leak. Because of the volume of oil spilled, however, there was concern regarding the volume of dispersants entering the environment. This led to a world  rst: the direct injecting of the dispersant at the wellhead at a depth of 1500 meters. Taking this drastic step was deemed necessary, as ?You knew that you were applying the dispersant directly to the oil. Also, as oil surfaces through the wa- ter, it becomes emulsi ed, and emulsi ed oil ? which basically has the consistency of mayonnaise ? is much harder to deal with.? In total his team spent four months in the region, not only ad- vising on the use of dispersants but monitoring their effects on the environment, and even tracking the much reported sub-surface ?oil plume? through the Gulf. While Dr. Lee?s career and knowledge base is inextricably linked to the use of chemical dispersants, he is always quick to stress the overriding nature of his work: ?All of the studies in my lab are based on understanding on how the marine ecosystem recovers from oil spills naturally and how we can speed that process up.? MTR2 Canada Supplement 49-64.indd 61MTR2 Canada Supplement 49-64.indd 612/23/2012 11:21:19 AM2/23/2012 11:21:19 AM