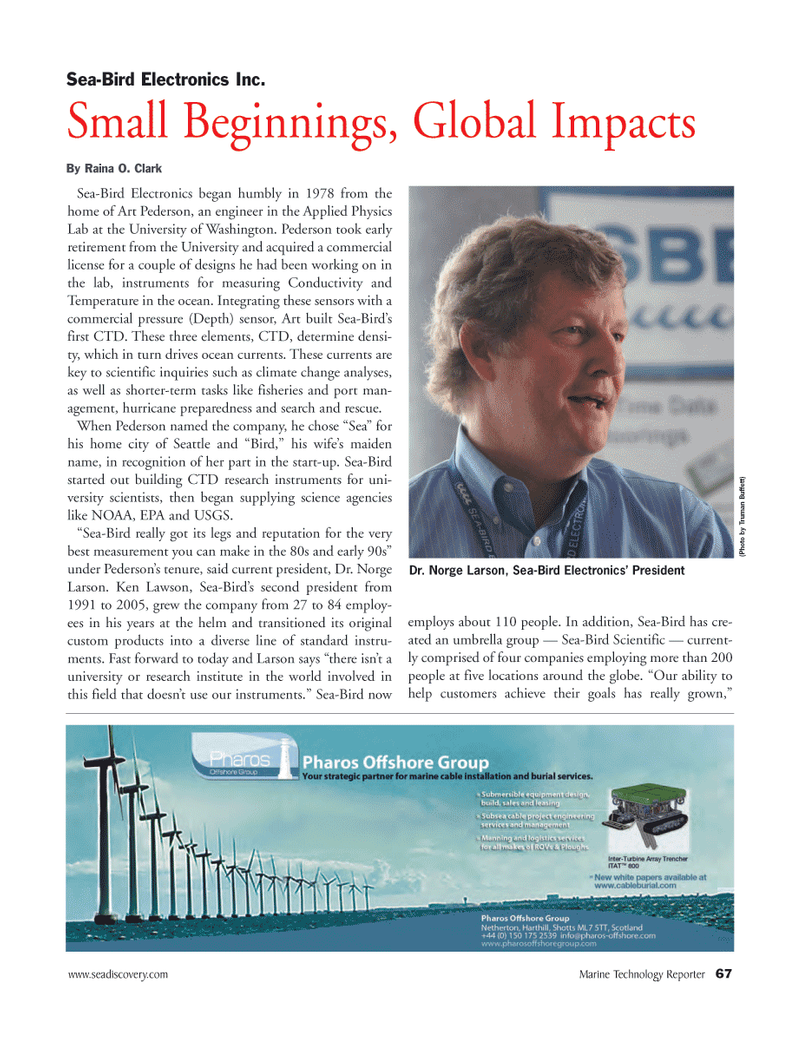 www.seadiscovery.com Marine Technology Reporter 67Sea-Bird Electronics began humbly in 1978 from the home of Art Pederson, an engineer in the Applied Physics Lab at the University of Washington. Pederson took early retirement from the University and acquired a commercial license for a couple of designs he had been working on in the lab, instruments for measuring Conductivity and Temperature in the ocean. Integrating these sensors with a commercial pressure (Depth) sensor, Art built Sea-Bird?s first CTD. These three elements, CTD, determine densi- ty, which in turn drives ocean currents. These currents are key to scientific inquiries such as climate change analyses,as well as shorter-term tasks like fisheries and port man- agement, hurricane preparedness and search and rescue. When Pederson named the company, he chose ?Sea? for his home city of Seattle and ?Bird,? his wife?s maiden name, in recognition of her part in the start-up. Sea-Bird started out building CTD research instruments for uni- versity scientists, then began supplying science agencies like NOAA, EPA and USGS. ?Sea-Bird really got its legs and reputation for the very best measurement you can make in the 80s and early 90s? under Pederson?s tenure, said current president, Dr. Norge Larson. Ken Lawson, Sea-Bird?s second president from 1991 to 2005, grew the company from 27 to 84 employ- ees in his years at the helm and transitioned its original custom products into a diverse line of standard instru- ments. Fast forward to today and Larson says ?there isn?t a university or research institute in the world involved in this field that doesn?t use our instruments.? Sea-Bird now employs about 110 people. In addition, Sea-Bird has cre- ated an umbrella group ? Sea-Bird Scientific ? current- ly comprised of four companies employing more than 200 people at five locations around the globe. ?Our ability to help customers achieve their goals has really grown,? Sea-Bird Electronics Inc. Small Beginnings, Global Impacts By Raina O. ClarkDr. Norge Larson, Sea-Bird Electronics? President (Photo by Truman Buffett) MTR#2 (66-81):MTR Layouts 2/22/2012 10:09 AM Page 67