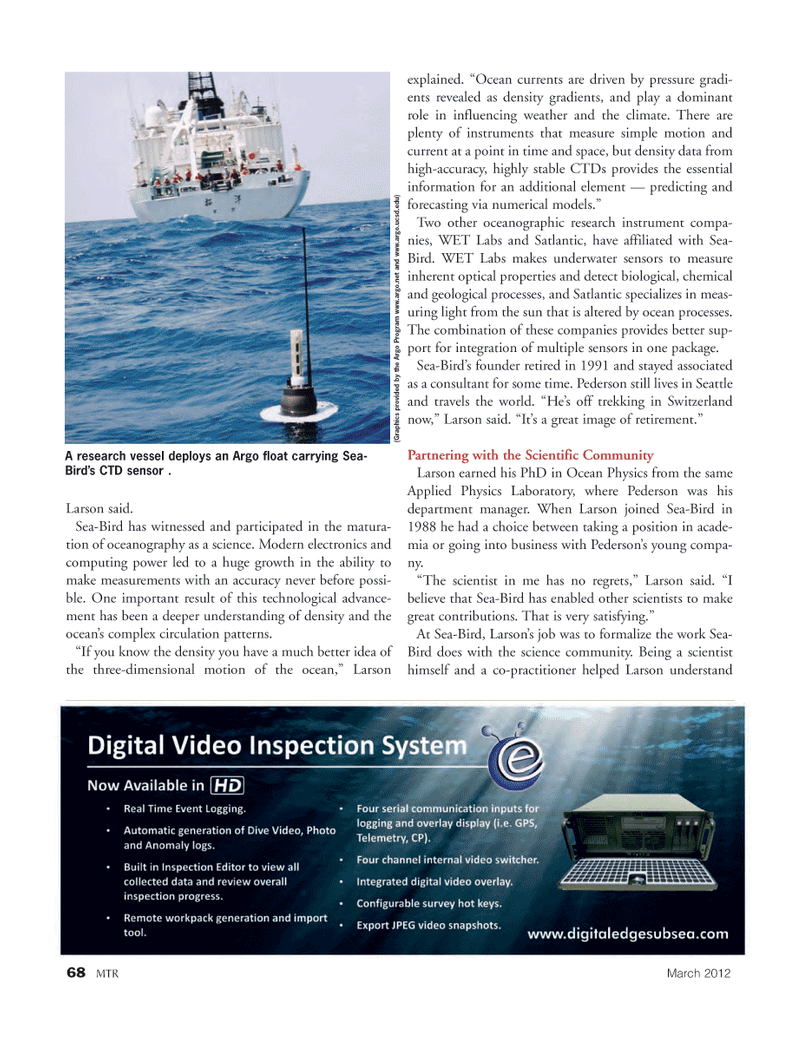 68MTRMarch 2012 Larson said.Sea-Bird has witnessed and participated in the matura- tion of oceanography as a science. Modern electronics and computing power led to a huge growth in the ability to make measurements with an accuracy never before possi- ble. One important result of this technological advance- ment has been a deeper understanding of density and theocean?s complex circulation patterns. ?If you know the density you have a much better idea of the three-dimensional motion of the ocean,? Larson explained. ?Ocean currents are driven by pressure gradi- ents revealed as density gradients, and play a dominant role in influencing weather and the climate. There are plenty of instruments that measure simple motion and current at a point in time and space, but density data from high-accuracy, highly stable CTDs provides the essential information for an additional element ? predicting and forecasting via numerical models.? Two other oceanographic research instrument compa- nies, WET Labs and Satlantic, have affiliated with Sea- Bird. WET Labs makes underwater sensors to measure inherent optical properties and detect biological, chemical and geological processes, and Satlantic specializes in meas- uring light from the sun that is altered by ocean processes. The combination of these companies provides better sup- port for integration of multiple sensors in one package. Sea-Bird?s founder retired in 1991 and stayed associated as a consultant for some time. Pederson still lives in Seattle and travels the world. ?He?s off trekking in Switzerland now,? Larson said. ?It?s a great image of retirement.? Partnering with the Scientific Community Larson earned his PhD in Ocean Physics from the same Applied Physics Laboratory, where Pederson was his department manager. When Larson joined Sea-Bird in 1988 he had a choice between taking a position in acade- mia or going into business with Pederson?s young compa- ny. ?The scientist in me has no regrets,? Larson said. ?I believe that Sea-Bird has enabled other scientists to make great contributions. That is very satisfying.? At Sea-Bird, Larson?s job was to formalize the work Sea- Bird does with the science community. Being a scientist himself and a co-practitioner helped Larson understandA research vessel deploys an Argo float carrying Sea- Bird?s CTD sensor . (Graphics provided by the Argo Program www.argo.net and www.argo.ucsd.edu) MTR#2 (66-81):MTR Layouts 2/22/2012 10:10 AM Page 68