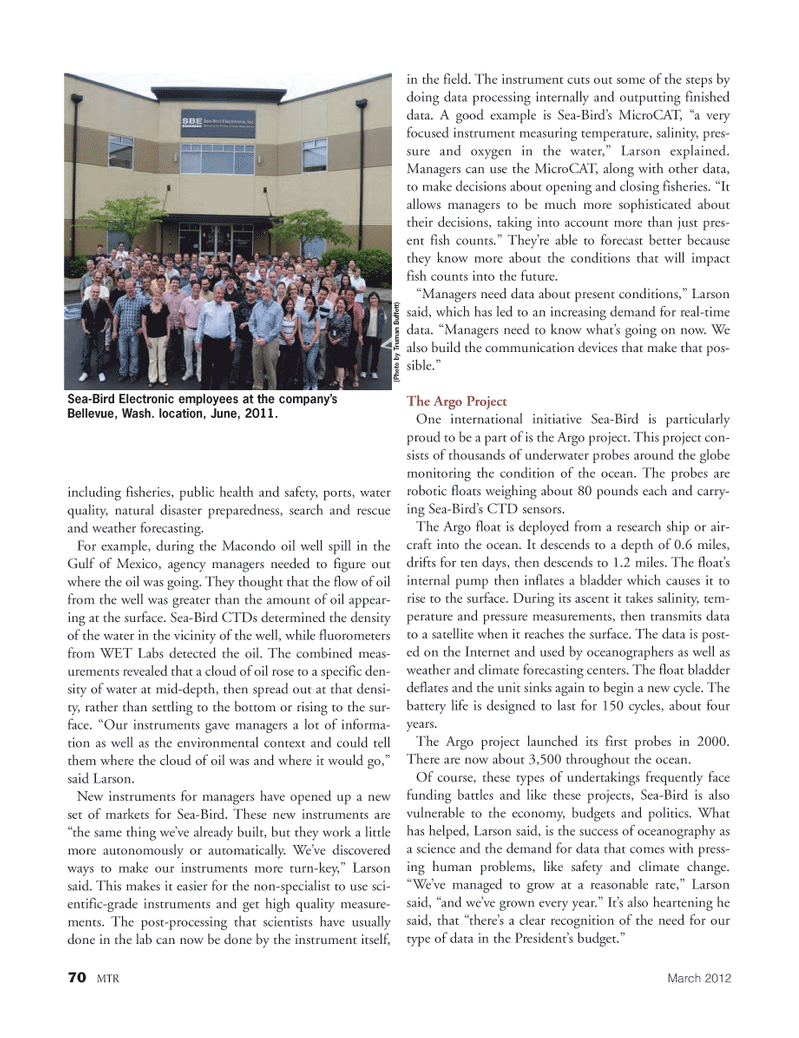 70MTRMarch 2012 including fisheries, public health and safety, ports, water quality, natural disaster preparedness, search and rescue and weather forecasting. For example, during the Macondo oil well spill in the Gulf of Mexico, agency managers needed to figure out where the oil was going. They thought that the flow of oil from the well was greater than the amount of oil appear- ing at the surface. Sea-Bird CTDs determined the density of the water in the vicinity of the well, while fluorometers from WET Labs detected the oil. The combined meas- urements revealed that a cloud of oil rose to a specific den- sity of water at mid-depth, then spread out at that densi- ty, rather than settling to the bottom or rising to the sur- face. ?Our instruments gave managers a lot of informa- tion as well as the environmental context and could tell them where the cloud of oil was and where it would go,? said Larson.New instruments for managers have opened up a new set of markets for Sea-Bird. These new instruments are ?the same thing we?ve already built, but they work a little more autonomously or automatically. We?ve discovered ways to make our instruments more turn-key,? Larson said. This makes it easier for the non-specialist to use sci- entific-grade instruments and get high quality measure- ments. The post-processing that scientists have usually done in the lab can now be done by the instrument itself, in the field. The instrument cuts out some of the steps by doing data processing internally and outputting finished data. A good example is Sea-Bird?s MicroCAT, ?a very focused instrument measuring temperature, salinity, pres- sure and oxygen in the water,? Larson explained. Managers can use the MicroCAT, along with other data, to make decisions about opening and closing fisheries. ?It allows managers to be much more sophisticated about their decisions, taking into account more than just pres- ent fish counts.? They?re able to forecast better because they know more about the conditions that will impact fish counts into the future. ?Managers need data about present conditions,? Larson said, which has led to an increasing demand for real-time data. ?Managers need to know what?s going on now. We also build the communication devices that make that pos-sible.?The Argo Project One international initiative Sea-Bird is particularly proud to be a part of is the Argo project. This project con- sists of thousands of underwater probes around the globe monitoring the condition of the ocean. The probes are robotic floats weighing about 80 pounds each and carry- ing Sea-Bird?s CTD sensors. The Argo float is deployed from a research ship or air- craft into the ocean. It descends to a depth of 0.6 miles, drifts for ten days, then descends to 1.2 miles. The float?s internal pump then inflates a bladder which causes it torise to the surface. During its ascent it takes salinity, tem- perature and pressure measurements, then transmits data to a satellite when it reaches the surface. The data is post- ed on the Internet and used by oceanographers as well as weather and climate forecasting centers. The float bladder deflates and the unit sinks again to begin a new cycle. The battery life is designed to last for 150 cycles, about four years. The Argo project launched its first probes in 2000. There are now about 3,500 throughout the ocean. Of course, these types of undertakings frequently face funding battles and like these projects, Sea-Bird is also vulnerable to the economy, budgets and politics. What has helped, Larson said, is the success of oceanography asa science and the demand for data that comes with press- ing human problems, like safety and climate change. ?We?ve managed to grow at a reasonable rate,? Larson said, ?and we?ve grown every year.? It?s also heartening he said, that ?there?s a clear recognition of the need for our type of data in the President?s budget.? Sea-Bird Electronic employees at the company?s Bellevue, Wash. location, June, 2011. (Photo by Truman Buffett) MTR#2 (66-81):MTR Layouts 2/22/2012 10:12 AM Page 70