Rhode Island may be the “red” state in terms of the state color, flower and tree, but it bleeds blue – Navy blue.  That’s because the U.S. Navy is deeply anchored into the fabric of the Ocean State’s history and economy. Its roots stretch all the way back to the birth of an armed naval force in 1775, and to the arrival of the forerunner to today’s naval research center on Goat Island in 1869. The Naval Academy sat out the civil war in Newport, which is now home to a collection of Naval training facilities, including the Naval War College.  Over the years, Quonset Point has hosted the Naval Air Station, the Seabees and the Navy’s Antarctic Support Squadron. On the financial side of the ledger, the Navy today is not only the third largest employer in the state; it is also the leading economic force for many businesses – big and small.
Particularly big is the Naval Undersea Warfare Center (NUWC), a roughly billion-dollars-a-year research center that serves as the nation’s repository for undersea warfare and technology knowledge. It is big, really big, and its tentacles are everywhere. “If Rhode Island has one drawing card in the business of undersea technology, it’s NUWC and everyone affiliated with it. The Rhode Island high-tech industry is NUWC actually, and the industry spinoffs,” says Malcolm Spaulding, co-founder of South Kingston, R.I. based ASA Sciences and Professor Emeritus of Ocean Engineering at the University of Rhode Island.
“Contractors locate in Southeastern Rhode Island because of the proximity to NUWC. And for the jobs - lots and lots of them,” continues Spaulding. “NUWC is the largest employer of graduates of URI’s marine sciences and engineering programs. If you look at NUWC staff, about a third came from URI,” he adds. “We probably hire more PhDs – 170 – than anyone else in the area;  half our people have masters,” says Don Aker,  Deputy Technical Director of NUWC, Division Newport.
Overall, NUWC employs 2,748 government civilian employees and 31 military members with a total gross payroll of more than $296 million.  Of the full-time government civilian staff, 74% are scientists or engineers and approximately 36% have graduate degrees. Anywhere from one third to one in every five are said to be University of Rhode (URI) Island alumni, many of whom went through NUWC’s internship program, and later have the opportunity to return to URI under a special, multi-discipline master’s program offered to NUWC employees.
With everyone cozying up to NUWC, it might come as a surprise to find that facility is actively and aggressively seeking paying customers to buy its services, licenses and intellectual property.  Especially when you look at the numbers.

NUWC impact in dollars and cents
The Navy’s substantial presence is divided primarily between Naval Station Newport, which houses most of the U.S. Navy’s training facilities, including the Naval War College among its 50 plus tenant commands, and NUWC Newport, the east coast underwater research and development arm of the NavSea. In addition to R&D, NUWC provides testing and evaluation, engineering, autonomous underwater systems,  fleet support for submarine warfare systems and many other offensive and defensive weapons systems associated with the undersea realm. NUWC employs more than 4,400 civilian and military personnel worldwide, with budgets of over $1 billion. With that kind of presence comes a lot of economic power, and payout.  In 2012, the total funded program of the Naval Undersea Warfare Center (NUWC) Newport topped $935 million. More than half of its total operating budget, $581 million, went to payroll, construction, facility support and local contracts. The command is the largest federal activity in R.I. in terms of personnel and payroll, with NUWC taking the biggest chunk of that.  The center awarded approximately $421 million in contracts, of which $200 million went to Rhode Island. NUWC also provides a lot of funding from the Small Business Innovative Research (SBIR) grant program.
“It’s a big boost to the community, a lot of the sponsors of those grants were based here in Newport because there’s good contact with the engineering, customer and defense communities,” said Jim Dodez, Vice President of Marketing and Strategic Planning, KVH Industries, Inc. in Middletown, R.I. SBIR grants stems from the mandate that a certain percentage of all government research money has to be directed to small business. “So much money has been spent here.”
As has so much knowledge has been gained, and stored, and actually, declassified. And much if it is up for grabs. That’s because despite those impressive budget figures from last years, the truth is, NUWC is not funded like your average government or military agency, which means it has to operate like a business. And that means actively selling its services and access to its intellectual property.
“One of the things that make us different from other government entities is that we are a Naval working capital fund activity. Almost every other federal agency has a line item in the budget to do what they do. We don’t,” explains Dr. Theresa A. Baus, Head, Technology Partnerships Office, Naval Undersea Warfare Center (NUWC). As a result, NUWC needs customers and sponsors to bill or services. Most of its budget comes for doing work for other sectors of the Navy, but they still need dollars back as it were, from the private sector, about 3%. So much so that the facility is open to doing projects that fall outside their purview.
“My function is to facilitate agreement between the division and outside entities, and we do this in a variety of ways,’ said Baus.
Spaulding describes Baus as “essentially the technology transfer office of NUWC at the pointy end of trying to get industry to take advantage of what they’ve got to offer.”
Anything labeled a “warfare center’’ tends to give off a scent of secrecy. But Akers said people might be surprised. “We definitely have areas of the organization we let the outside world into. Much of our research involves things we can do in association with universities and individuals.”

Have it your way
The opportunities for contracting with the private sector come from many angles. In addition to licensing NUWC’s technology, the facility makes money by:
•    Selling outright or leasing access to, the center’s enormous trove of technology, patents and other intellectual property. Patents can be licensed singularly or in bundles. “We are probably awarded about 50 patents a year out of the 73 or so applications we file,” said Baus. “We are usually first or second in the Navy in terms of who gets the most patent awards every year,” adds Akers.
•    Renting out its unique testing facilities to customers in a wide range of industries. “We have a number of unusual test facilities that are important to have for us, but industry may not have enough usage for them to justify owning and operating one. As a government facility we can do that,” explains John Woodhouse, a NUWC spokesman. For example, NUWC has isolation room that allows researchers to measure sound. There is also a wind tunnel that can rack the effect of flow over a surface. Several years ago, Ford Motor Co. wanted to see how much noise was created by the side view mirrors on the Ford 150 truck. So they contracted with NUWC to bring in a truck and test the sound.
•    Cooperative Agreements. This is where NUWC and a client sit down and work out the scope of the project, who does what, can use what, who pays for what, and at the end, how the technology rights will be handled. One thing potential clients should be aware of – NUWC can only grant non-exclusive usage rights to a technology under a cooperative agreement.
However, the client doesn’t have to pay any fees. The topic area of research has to be in NUWC’s mission area and the work has to be collaborative, and of mutual benefit to both parties.
•    Joint research on areas the Navy is very interested in, such as battery technologies, corrosion, antifouling coatings, chemical sensor detection, buoys, autonomy in general. This is especially helpful in enabling the navy to avoid reinventing the wheel.
•    Access to NUWC’s pool of government mandated Small Business Innovation Research fund. Akers says NUWC has about $200 million set aside for contracting with small businesses. “We use that to try and get a nice innovative company to give us new ideas.”
So it’s not just the university that is open for business. For startups, spinoffs and small businesses especially, examining NUWC’s services and portfolio may be well worth it. As many industry observers have noted, you can’t buy the kind of brain power and institutional knowledge roaming about NUWC’s laboratories, nor can most young companies afford to build any testing facility, never mind anything particularly unique. NUWC is willing to work with anyone willing to pay them or who can find a use for much of the technology  they develop. And the list of people who are profiting from that agreement is getting longer by day.
“For a long time people have thought they couldn’t come in and talk to us. That was true 10 or 15 years ago. But things have changed,” says Aker.

(As published in the March 2013 edition of Marine Technologies - www.seadiscovery.com) 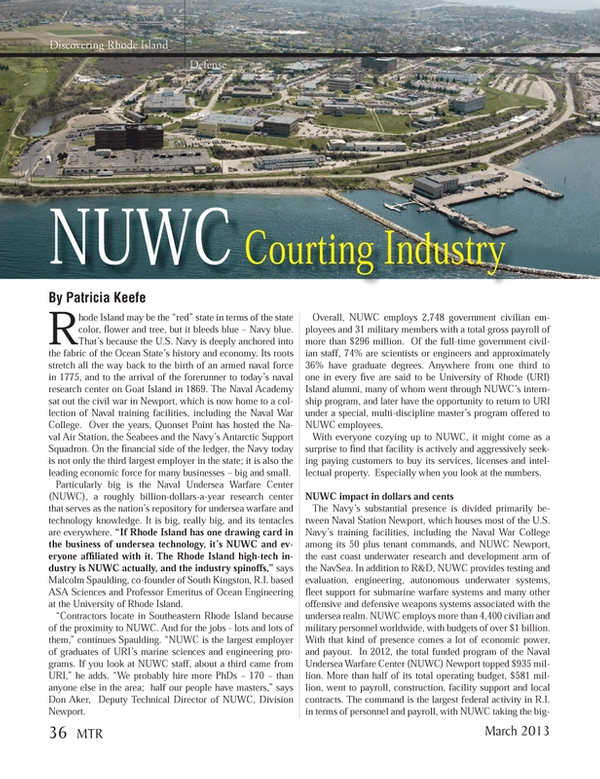 Other stories from March 2013 issue