Along the last decade major improvements in the quality of subsurface mapping of geological formations containing complex salt bodies have taken place with the introduction of broadband seismic survey technology. Since the discovery of the Lula oil field in 2006, CGG’s BroadSeis has been involved in the most important pre-salt discoveries. Marine Technology Reporter’s Correspondent in Brazil, Claudio Paschoa gives us some insight on CGG’s experience in shooting seismic of large areas along the pre-salt rich Santos Basin, with its trademark BroadSeis, 3D broadband seismic data acquisition system.
New PSDM 3D seismic reflection data acquired from the highly prolific Santos Basin provides comprehensive insight into, the evaporite architecture and potential pre-salt hydrocarbon reservoirs, allowing geologists to have a better understanding of these deepwater geological formations. “The pre-salt region runs from the south of the state of Bahia, to the north of the state of Santa Catarina, yet some remnants of the salt layer can be found further north, such as along the Sergipe/Alagoas Basin,” said Luiz Braga Ph.D, VP – Director of Geomarket Latin America for CGG. Pre-salt reservoirs are always found in carbonate rock formations beneath salt layers and salt domes that can be up to 2,000 meters thick, which act as seals, above the salt lay complex and heterogeneous rock formations that can be as thick as the salt layer and all this under 2,000 meters of water or more. Acquiring seismic data that clearly shows the boundaries and composition of different layers during visualization is a daunting task for geophysicists and engineers alike.

Pre-salt Seismic Exploration
It is widely known be that early Petrobras seismic surveys in the Campos Basin targeted shallow water, pre-salt reservoirs. Several large plays were discovered between late 1970’s until the early 1980’s in pre-salt fractured basalts, sandstones, and coquinas, with coquinas being the primary reservoir. However, with the discovery of super giant fields in post-salt, Upper Cretaceous and Tertiary large scale, turbidite sandstones, the sub-salt system was largely ignored until around 2004.
“It was generally believed by Petrobras geoscientists that the sub-salt rocks were too compacted to be good reservoirs,” said Dr. Marcio Mello, President of High Resolution Technology and Petroleum (HRT), in 2008. The early seismic pre-salt data acquired offshore Brazil, which showed traces of the salt layers actually excited other geologists in the know, with the possibility of large, thick pockets laden with hydrocarbon and source rocks being trapped under these salt seals, which proved to be the case, but the quality of seismic data was not good enough to form a clear picture of the reservoirs. The technology at the time did not allow for much deepwater exploratory drilling and it would take almost a decade for the first deepwater wells to be drilled offshore Brazil and these were targeting post-salt prospects. Only after the turn of the century did seismic surveys begin to deliver higher quality data needed for deepwater pre-salt formation analysis, and only around 2004-2005 was the Broadband technology first applied to seismic surveys in the Santos Basin, which led to the discovery of the Lula field (at the time named Tupi). By then the quality of the seismic data allowed, Petrobras and partners to confidently commit to the hugely expensive drilling of the first pre-salt pilot well.
Before the discovery of the Lula field conventional wisdom had it that most of the big, easily located fields known as “elephants” had already been discovered and the only fields left were smaller and more difficult to find. This historic discovery is located in Block BM-S-11 in the Santos Basin, 190 miles (305 km) offshore, lying below 2,000 meters (6,600 ft.) of water and 5,000 meters (16,000 ft.) of salt, sand and rock layers. In 2006 Lula was ranked as one of the 50 largest fields in the world, yet it is well known that its volumes of recoverable oil have been surpassed by the Libra field and by a few other Brazilian supergiant discoveries as well. It is important to note that Libra is located within the same Block BM-S-11 as Lula. Other significant discoveries have been made within an approximately, 50 mile (80 km) radius.  Another good example within this radius, is the third well (informally known as Carcará), drilled in the Bem-te-vi field’s Evaluation Plan (PAD). It is located in Block BM-S-8, and identified a significant pre-salt column of at least 471 meters of light oil of 31° API. Pressure data obtained indicate that the reservoirs under these three wells are interconnected. As yet, there has been only speculation on the recoverable volumes of this reservoir, with some saying it may be the biggest yet. All of these reservoirs were located, using CGG’s BroadSeis seismic acquisition technology. Between the years 2001-2002, a unique 20,000-sq. km, 3D seismic survey over the blocks covering the Lula discovery was acquired by CGG as a multi-client survey.  In 2008 a test area covering the discovery was reprocessed using CGG’s advanced Reverse Time Migration, which significantly enhanced the image of the reservoir beneath the salt. The test was performed on CGG’s multi-client library, and based on its success CGG reprocessed the overall survey, which led to other significant enhanced reservoir images that are now recognized as high volume reservoirs, true “elephants.” The 3D seismic data acquired by CGG was the key factor in revealing the pre-salt potential in the Santos Basin. With the Cluster Survey covering the major Lula, Carioca and Jupiter discoveries, whilst a 16,000 km 2 Cluster extension Survey covers an area with predominantly unlicensed acreage with significant reservoirs, which are mostly now part of the Onerous Transfer of Rights Agreement, between Petrobras and the Union (Brazilian Government).

BroadSeis Technology
CGG’s BroadSeis technology is based on a marine broadband seismic data acquisition system, combining the use of sensitive low-noise Sercel Sentinel streamers configured to optimally curved, variable-depth, streaming profiles, with an average depth of over 40 m, and 3D de-ghosting. The combined use of the optimized Sentinel streamers and very deep and stable towing has delivered an excellent signal-to-noise ratio at the lowest frequencies (down to 2.5 Hz). The development of this unique broadband seismic data acquisition system, has been a key factor in enhance deep, pre-salt imaging, and also to highlight layering and facies variations. “The optimally curved streamer profile provides excellent receiver ghost notch diversity, for de-ghosting the data and accessing the widest bandwidth possible. This results in a clean, sharp seismic wavelet, with minimal sidelobes. This, along with Reverse Time Migration imaging technology has greatly improved the resolution of events and allowed geologists to more easily recognize and interpret the geological features that identify the location of potential hydrocarbon reservoirs. After the discovery of Lula, subsequent discoveries confirmed that the Lower Cretaceous carbonate reservoirs have been established within the upper synrift and post-rift layers, singling out these layers as the most probable locations of any pre-salt reservoirs in the Santos Basin,” said Luiz Braga, while explaining how BroadSeis worked. Another CGG seismic asset is StagSeis, which is a full-azimuth, ultra-long offset broadband solution to provide the best images beneath complex overburdens, such as found in the pre-salt,  to reduce exploration risk.

Pre-salt Characterization
Within the pre-salt, a number of mega-sequences can be identified, with the oldest being a highly faulted, pre-rift basement. These basement blocks impart a major influence on the deposition of pre-salt reservoirs. Lacustrine shales and mudstones make up the highly prolific source rock. Directly above are thick, syn-rift sediments, consisting of a lower and upper sequence. These sequences can be differentiated easily from each other, due to the changes in sediment character and orientation of sediments, along with the termination of extensional faults at the base of the post rift. The upper syn-rift is important for petroleum exploration in the northern Santos basin, as it provides the main carbonate coquinas reservoir for Franco and Libra fields. The boundary between the upper syn-rift and post-rift sequence is marked by an erosional unconformity that represents a major change in depositional environment. This uncorformity indicates a change from an active rift environment to a period of thermal subsidence. During this phase, non-marine microbial carbonates were deposited, with build-ups forming above faulted basement highs. These post-rift sediments can be identified by uniform, parallel reflectors, along with aggradational build-ups. Recognition of this sequence is key to establishing potential reservoirs of non-marine carbonates, as observed in Lula field. All pre-salt reservoirs are sealed by a thick sequence of evaporates, that extend laterally across the basin. These evaporites consist of deformed halite, inter-bedded with autochthonous anhydrite and clastic sediments of Aptian age.
This year CGG has started acquiring a large BroadSeis 3D multi-client survey program in the deep and ultra-deepwaters of the Espírito Santo Basin, with the project receiving large prefunding from major industry players. The Espírito Santo Phase III survey will cover an area of over 9,500 square km. The high-end BroadSeis data is being processed at CGG’s powerful subsurface imaging hub in Rio de Janeiro through advanced PSDM workflows in order to meet the specific imaging challenges of the Espírito Santo Basin pre-salt plays. During the announcement of the Espírito Santos project in May, Jean-Georges Malcor, CEO, CGG, said: “We are delighted to conduct this new multi-client project in the Espírito Santo Basin where CGG’s recognized broadband imaging solutions will help to further unlock the fantastic potential of this basin. This program will add to the recent success of our broadband technology in the Santos Basin where CGG owns the largest 3D multi-client seismic library.” This new survey in the Espírito Santo Basin, has Brazilian geologists who specialize in pre-salt mapping excited, as there are true possibilities of large reservoirs being uncovered due to the broader bandwidths and sharper wavelets used in by the BroadSeis technology. “The most significant portion of the salt layer, where the great lakes were formed during the separation of the continents can be found in the Espírito Santo Basin,” said Luiz Braga. With this fact in mind, it is not unreasonable to consider the possibility that other giant or even supergiant reservoirs may still be discovered off Esrírito Santo, with the eastern and southern sectors of the basin, the deepwater portion bordering the north Campos Basin being especially promising,
Broadband seismic data gives the following benefits on the South Atlantic Margins:
Overall genuine formation signature: no side-lobes and sharper central peak.
Strong basis for reservoir characterization and pre-stack seismic inversion.
Low frequencies penetrate deeper to help imaging trough salt bodies and interpret deep syn-rift fault blocks to better understand pre-salt plays.
High frequencies allow for high-resolution shallow imaging and subtle facies variations in the post-salt turbidite plays. 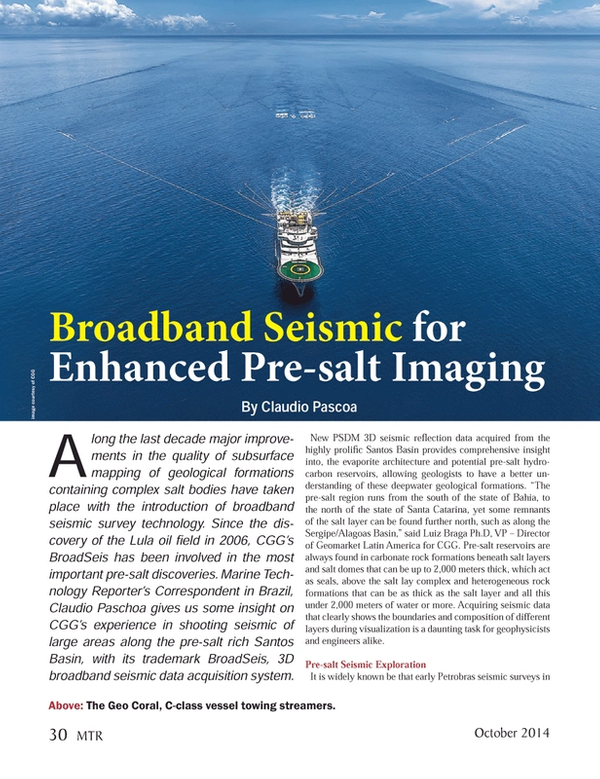