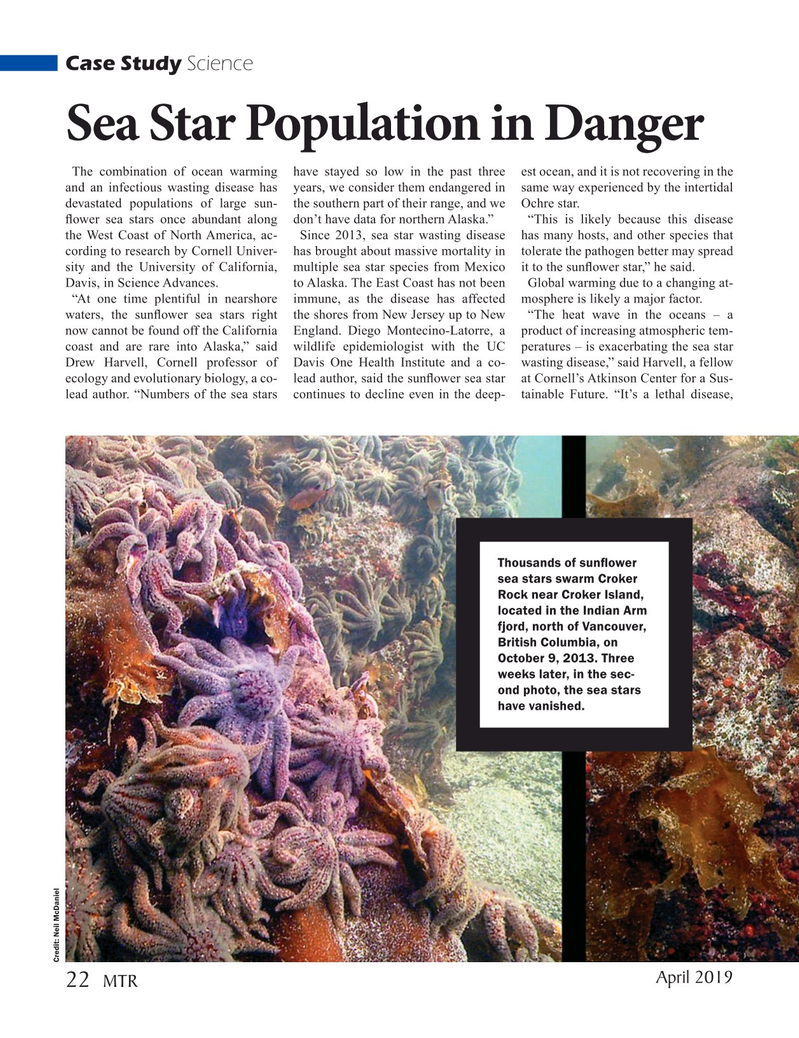 The combination of ocean warming have stayed so low in the past three est ocean, and it is not recovering in the and an infectious wasting disease has years, we consider them endangered in same way experienced by the intertidal devastated populations of large sun- the southern part of their range, and we Ochre star.

? ower sea stars once abundant along don’t have data for northern Alaska.” “This is likely because this disease the West Coast of North America, ac- Since 2013, sea star wasting disease has many hosts, and other species that cording to research by Cornell Univer- has brought about massive mortality in tolerate the pathogen better may spread sity and the University of California, multiple sea star species from Mexico it to the sun? ower star,” he said.

Davis, in Science Advances. to Alaska. The East Coast has not been Global warming due to a changing at- “At one time plentiful in nearshore immune, as the disease has affected mosphere is likely a major factor.

waters, the sun? ower sea stars right the shores from New Jersey up to New “The heat wave in the oceans – a now cannot be found off the California England. Diego Montecino-Latorre, a product of increasing atmospheric tem- coast and are rare into Alaska,” said wildlife epidemiologist with the UC peratures – is exacerbating the sea star

Drew Harvell, Cornell professor of Davis One Health Institute and a co- wasting disease,” said Harvell, a fellow ecology and evolutionary biology, a co- lead author, said the sun? ower sea star at Cornell’s Atkinson Center for a Sus- lead author. “Numbers of the sea stars continues to decline even in the deep- tainable Future. “It’s a lethal disease,

Rock near Croker Island, located in the Indian Arm fjord, north of Vancouver,