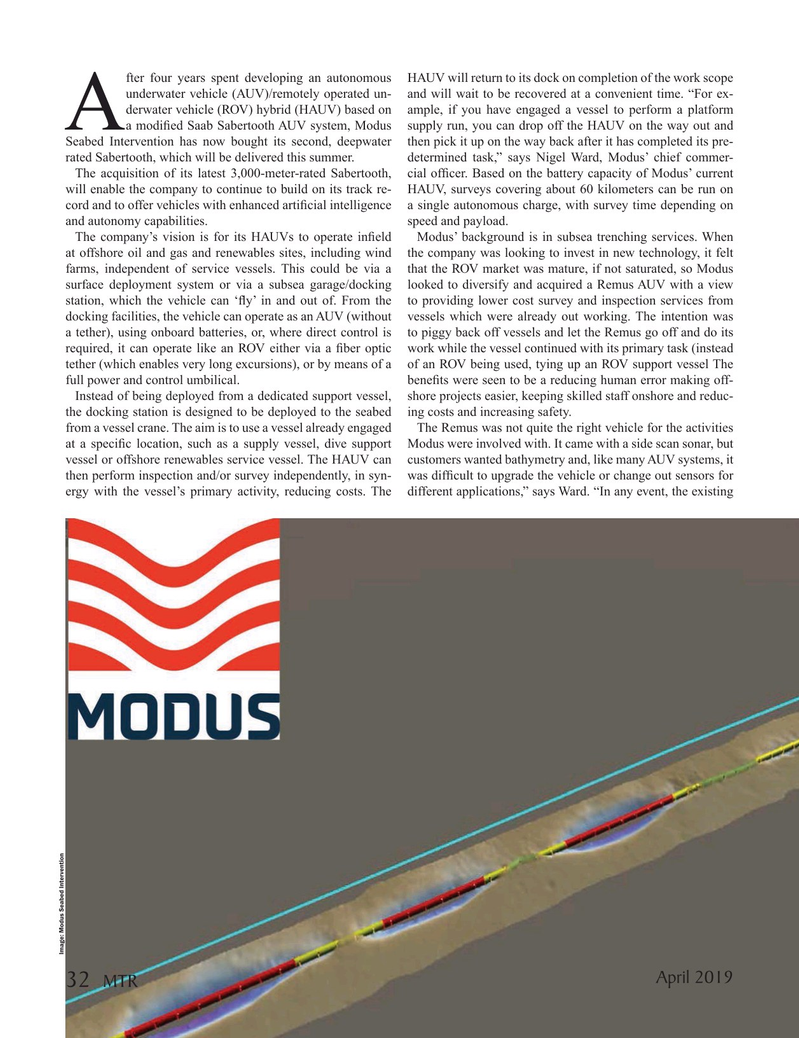 fter four years spent developing an autonomous HAUV will return to its dock on completion of the work scope underwater vehicle (AUV)/remotely operated un- and will wait to be recovered at a convenient time. “For ex- derwater vehicle (ROV) hybrid (HAUV) based on ample, if you have engaged a vessel to perform a platform

Aa modi? ed Saab Sabertooth AUV system, Modus supply run, you can drop off the HAUV on the way out and

Seabed Intervention has now bought its second, deepwater then pick it up on the way back after it has completed its pre- rated Sabertooth, which will be delivered this summer. determined task,” says Nigel Ward, Modus’ chief commer-

The acquisition of its latest 3,000-meter-rated Sabertooth, cial of? cer. Based on the battery capacity of Modus’ current will enable the company to continue to build on its track re- HAUV, surveys covering about 60 kilometers can be run on cord and to offer vehicles with enhanced arti? cial intelligence a single autonomous charge, with survey time depending on and autonomy capabilities. speed and payload.

The company’s vision is for its HAUVs to operate in? eld Modus’ background is in subsea trenching services. When at offshore oil and gas and renewables sites, including wind the company was looking to invest in new technology, it felt farms, independent of service vessels. This could be via a that the ROV market was mature, if not saturated, so Modus surface deployment system or via a subsea garage/docking looked to diversify and acquired a Remus AUV with a view station, which the vehicle can ‘? y’ in and out of. From the to providing lower cost survey and inspection services from docking facilities, the vehicle can operate as an AUV (without vessels which were already out working. The intention was a tether), using onboard batteries, or, where direct control is to piggy back off vessels and let the Remus go off and do its required, it can operate like an ROV either via a ? ber optic work while the vessel continued with its primary task (instead tether (which enables very long excursions), or by means of a of an ROV being used, tying up an ROV support vessel The full power and control umbilical. bene? ts were seen to be a reducing human error making off-

Instead of being deployed from a dedicated support vessel, shore projects easier, keeping skilled staff onshore and reduc- the docking station is designed to be deployed to the seabed ing costs and increasing safety.

from a vessel crane. The aim is to use a vessel already engaged The Remus was not quite the right vehicle for the activities at a speci? c location, such as a supply vessel, dive support Modus were involved with. It came with a side scan sonar, but vessel or offshore renewables service vessel. The HAUV can customers wanted bathymetry and, like many AUV systems, it then perform inspection and/or survey independently, in syn- was dif? cult to upgrade the vehicle or change out sensors for ergy with the vessel’s primary activity, reducing costs. The different applications,” says Ward. “In any event, the existing