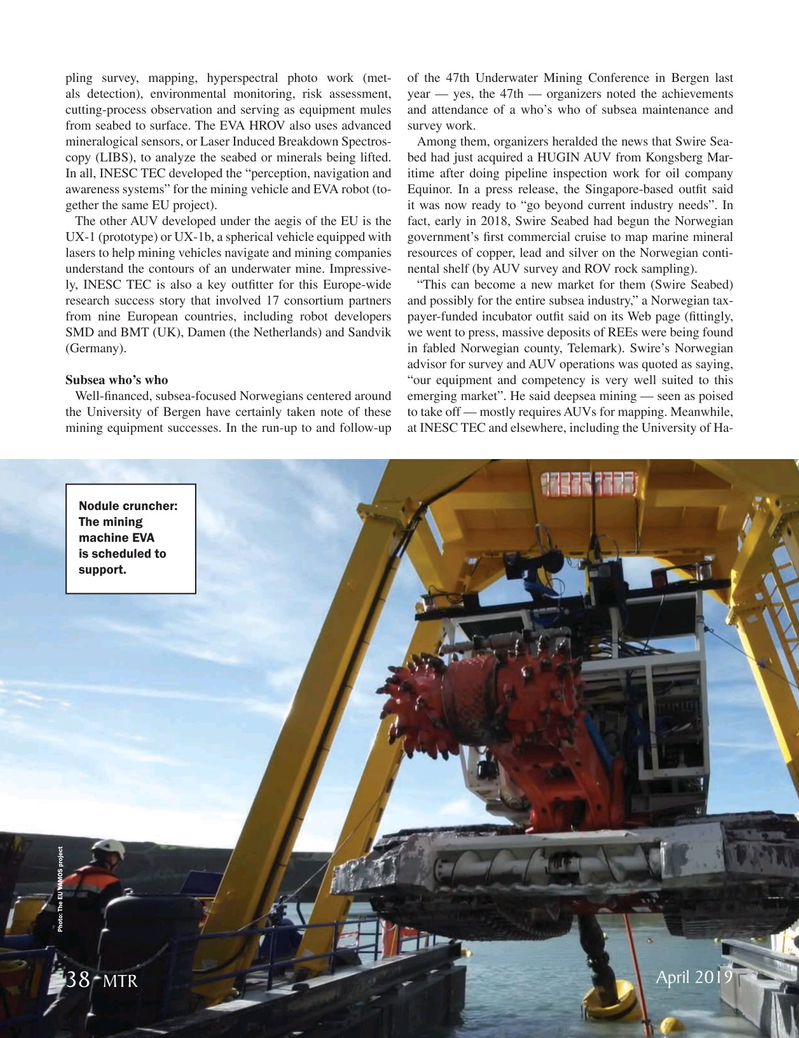 In all, INESC TEC developed the “perception, navigation and itime after doing pipeline inspection work for oil company awareness systems” for the mining vehicle and EVA robot (to- Equinor. In a press release, the Singapore-based out? t said gether the same EU project). it was now ready to “go beyond current industry needs”. In

The other AUV developed under the aegis of the EU is the fact, early in 2018, Swire Seabed had begun the Norwegian

UX-1 (prototype) or UX-1b, a spherical vehicle equipped with government’s ? rst commercial cruise to map marine mineral lasers to help mining vehicles navigate and mining companies resources of copper, lead and silver on the Norwegian conti- understand the contours of an underwater mine. Impressive- nental shelf (by AUV survey and ROV rock sampling).

ly, INESC TEC is also a key out? tter for this Europe-wide “This can become a new market for them (Swire Seabed) research success story that involved 17 consortium partners and possibly for the entire subsea industry,” a Norwegian tax- from nine European countries, including robot developers payer-funded incubator out? t said on its Web page (? ttingly,

SMD and BMT (UK), Damen (the Netherlands) and Sandvik we went to press, massive deposits of REEs were being found (Germany). in fabled Norwegian county, Telemark). Swire’s Norwegian advisor for survey and AUV operations was quoted as saying,

Well-? nanced, subsea-focused Norwegians centered around emerging market”. He said deepsea mining — seen as poised the University of Bergen have certainly taken note of these to take off — mostly requires AUVs for mapping. Meanwhile, mining equipment successes. In the run-up to and follow-up at INESC TEC and elsewhere, including the University of Ha-

The mining machine EVA is scheduled to support.