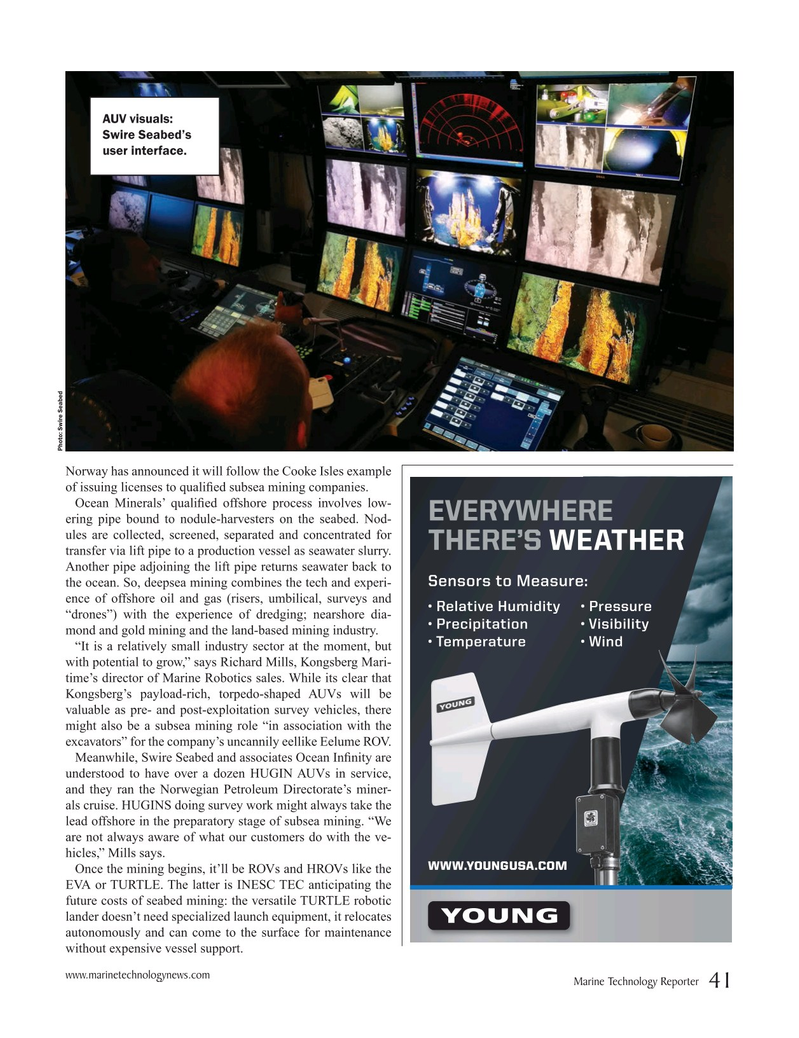 Norway has announced it will follow the Cooke Isles example of issuing licenses to quali? ed subsea mining companies.

Another pipe adjoining the lift pipe returns seawater back to the ocean. So, deepsea mining combines the tech and experi- ence of offshore oil and gas (risers, umbilical, surveys and “drones”) with the experience of dredging; nearshore dia- mond and gold mining and the land-based mining industry. “It is a relatively small industry sector at the moment, but with potential to grow,” says Richard Mills, Kongsberg Mari- time’s director of Marine Robotics sales. While its clear that

Kongsberg’s payload-rich, torpedo-shaped AUVs will be valuable as pre- and post-exploitation survey vehicles, there might also be a subsea mining role “in association with the excavators” for the company’s uncannily eellike Eelume ROV.

Meanwhile, Swire Seabed and associates Ocean In? nity are understood to have over a dozen HUGIN AUVs in service, and they ran the Norwegian Petroleum Directorate’s miner- als cruise. HUGINS doing survey work might always take the lead offshore in the preparatory stage of subsea mining. “We are not always aware of what our customers do with the ve- hicles,” Mills says.

Once the mining begins, it’ll be ROVs and HROVs like the

EVA or TURTLE. The latter is INESC TEC anticipating the future costs of seabed mining: the versatile TURTLE robotic lander doesn’t need specialized launch equipment, it relocates autonomously and can come to the surface for maintenance without expensive vessel support.