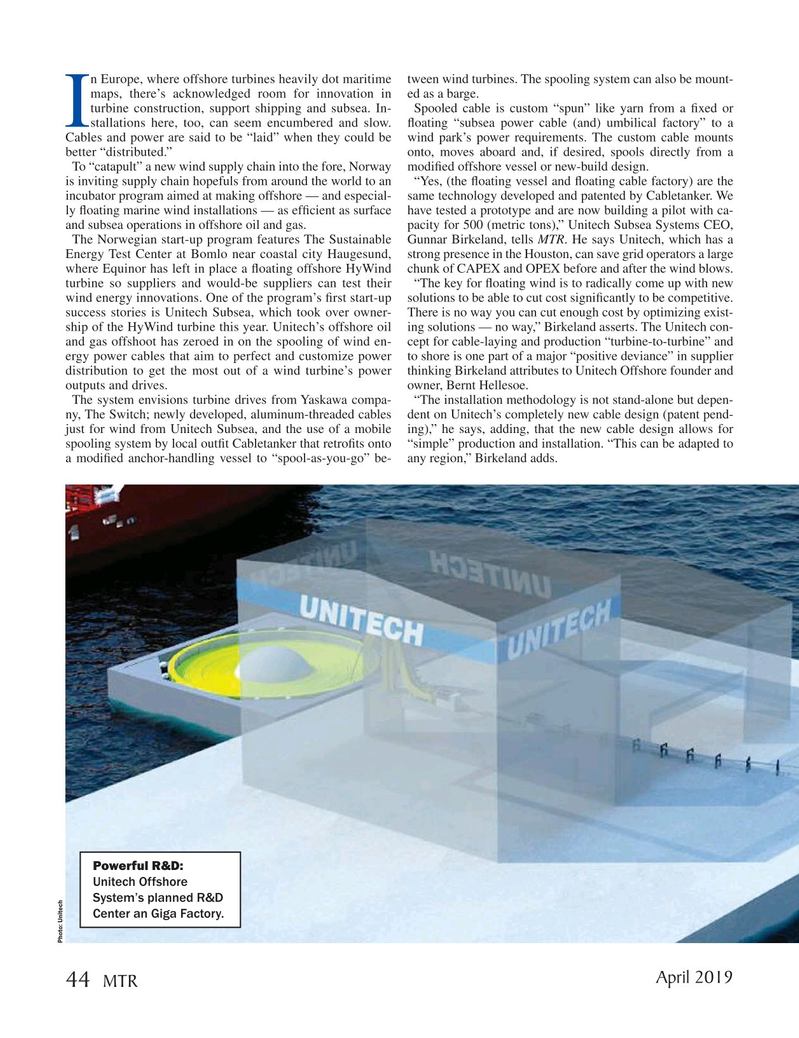 turbine construction, support shipping and subsea. In- Spooled cable is custom “spun” like yarn from a ? xed or

Istallations here, too, can seem encumbered and slow. ? oating “subsea power cable (and) umbilical factory” to a

Cables and power are said to be “laid” when they could be wind park’s power requirements. The custom cable mounts better “distributed.” onto, moves aboard and, if desired, spools directly from a

is inviting supply chain hopefuls from around the world to an “Yes, (the ? oating vessel and ? oating cable factory) are the incubator program aimed at making offshore — and especial- same technology developed and patented by Cabletanker. We ly ? oating marine wind installations — as ef? cient as surface have tested a prototype and are now building a pilot with ca- and subsea operations in offshore oil and gas. pacity for 500 (metric tons),” Unitech Subsea Systems CEO,

The Norwegian start-up program features The Sustainable Gunnar Birkeland, tells MTR. He says Unitech, which has a

Energy Test Center at Bomlo near coastal city Haugesund, strong presence in the Houston, can save grid operators a large where Equinor has left in place a ? oating offshore HyWind chunk of CAPEX and OPEX before and after the wind blows.

turbine so suppliers and would-be suppliers can test their “The key for ? oating wind is to radically come up with new wind energy innovations. One of the program’s ? rst start-up solutions to be able to cut cost signi? cantly to be competitive. success stories is Unitech Subsea, which took over owner- There is no way you can cut enough cost by optimizing exist- ship of the HyWind turbine this year. Unitech’s offshore oil ing solutions — no way,” Birkeland asserts. The Unitech con- and gas offshoot has zeroed in on the spooling of wind en- cept for cable-laying and production “turbine-to-turbine” and ergy power cables that aim to perfect and customize power to shore is one part of a major “positive deviance” in supplier distribution to get the most out of a wind turbine’s power thinking Birkeland attributes to Unitech Offshore founder and outputs and drives. owner, Bernt Hellesoe.

The system envisions turbine drives from Yaskawa compa- “The installation methodology is not stand-alone but depen- ny, The Switch; newly developed, aluminum-threaded cables dent on Unitech’s completely new cable design (patent pend- just for wind from Unitech Subsea, and the use of a mobile ing),” he says, adding, that the new cable design allows for spooling system by local out? t Cabletanker that retro? ts onto “simple” production and installation. “This can be adapted to a modi? ed anchor-handling vessel to “spool-as-you-go” be- any region,” Birkeland adds.