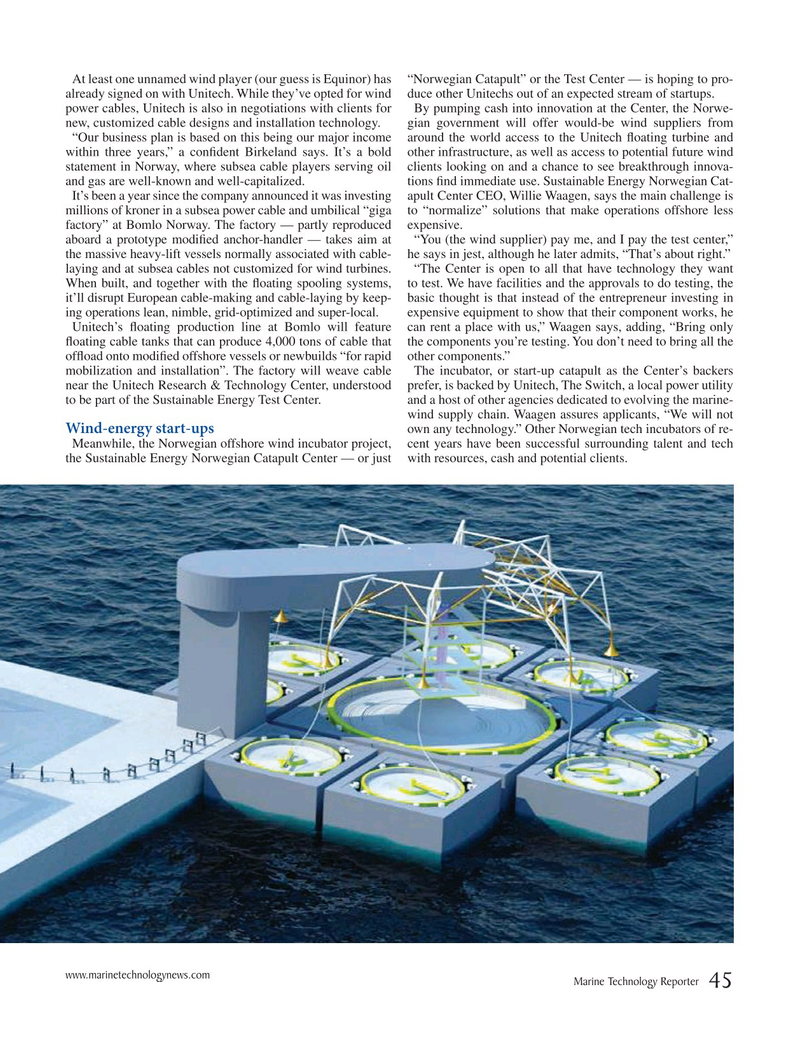 At least one unnamed wind player (our guess is Equinor) has “Norwegian Catapult” or the Test Center — is hoping to pro- already signed on with Unitech. While they’ve opted for wind duce other Unitechs out of an expected stream of startups. power cables, Unitech is also in negotiations with clients for By pumping cash into innovation at the Center, the Norwe- new, customized cable designs and installation technology. gian government will offer would-be wind suppliers from “Our business plan is based on this being our major income around the world access to the Unitech ? oating turbine and within three years,” a con? dent Birkeland says. It’s a bold other infrastructure, as well as access to potential future wind statement in Norway, where subsea cable players serving oil clients looking on and a chance to see breakthrough innova- and gas are well-known and well-capitalized. tions ? nd immediate use. Sustainable Energy Norwegian Cat-

It’s been a year since the company announced it was investing apult Center CEO, Willie Waagen, says the main challenge is millions of kroner in a subsea power cable and umbilical “giga to “normalize” solutions that make operations offshore less factory” at Bomlo Norway. The factory — partly reproduced expensive.

aboard a prototype modi? ed anchor-handler — takes aim at “You (the wind supplier) pay me, and I pay the test center,” the massive heavy-lift vessels normally associated with cable- he says in jest, although he later admits, “That’s about right.” laying and at subsea cables not customized for wind turbines. “The Center is open to all that have technology they want

When built, and together with the ? oating spooling systems, to test. We have facilities and the approvals to do testing, the it’ll disrupt European cable-making and cable-laying by keep- basic thought is that instead of the entrepreneur investing in ing operations lean, nimble, grid-optimized and super-local. expensive equipment to show that their component works, he

Unitech’s ? oating production line at Bomlo will feature can rent a place with us,” Waagen says, adding, “Bring only ? oating cable tanks that can produce 4,000 tons of cable that the components you’re testing. You don’t need to bring all the of? oad onto modi? ed offshore vessels or newbuilds “for rapid other components.” mobilization and installation”. The factory will weave cable The incubator, or start-up catapult as the Center’s backers near the Unitech Research & Technology Center, understood prefer, is backed by Unitech, The Switch, a local power utility to be part of the Sustainable Energy Test Center. and a host of other agencies dedicated to evolving the marine- wind supply chain. Waagen assures applicants, “We will not

Wind-energy start-ups own any technology.” Other Norwegian tech incubators of re-