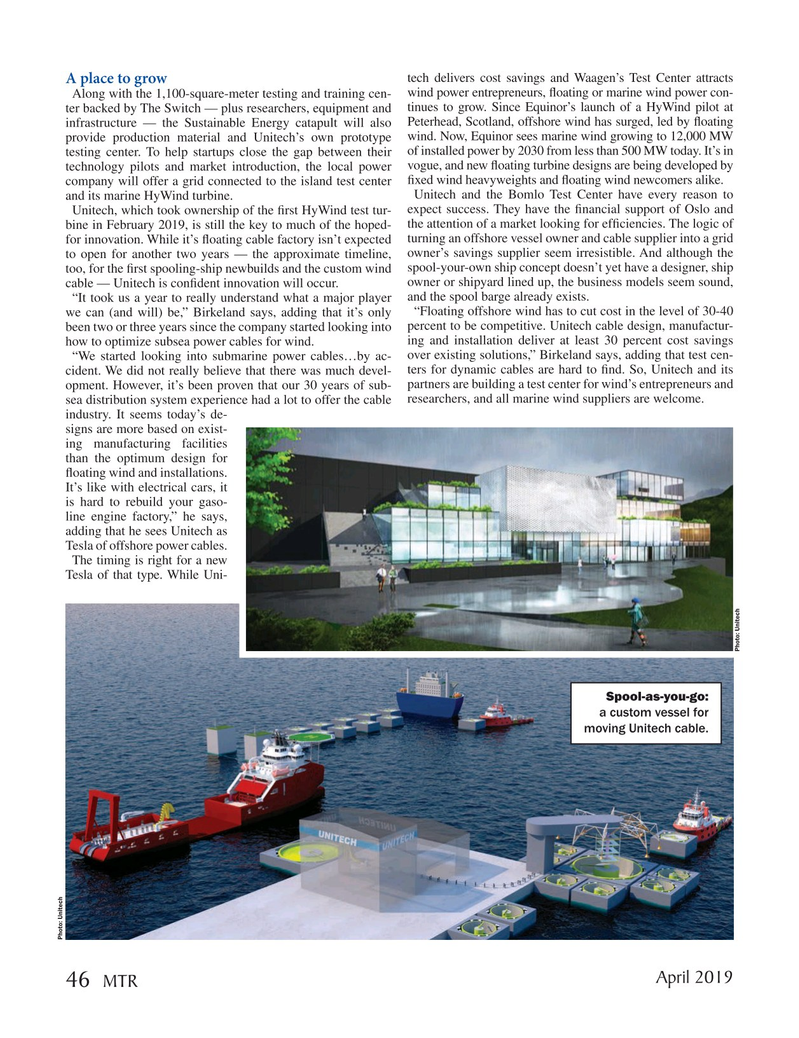 A place to grow

Along with the 1,100-square-meter testing and training cen- wind power entrepreneurs, ? oating or marine wind power con- ter backed by The Switch — plus researchers, equipment and tinues to grow. Since Equinor’s launch of a HyWind pilot at infrastructure — the Sustainable Energy catapult will also Peterhead, Scotland, offshore wind has surged, led by ? oating provide production material and Unitech’s own prototype wind. Now, Equinor sees marine wind growing to 12,000 MW testing center. To help startups close the gap between their of installed power by 2030 from less than 500 MW today. It’s in technology pilots and market introduction, the local power vogue, and new ? oating turbine designs are being developed by company will offer a grid connected to the island test center ? xed wind heavyweights and ? oating wind newcomers alike. and its marine HyWind turbine. Unitech and the Bomlo Test Center have every reason to

Unitech, which took ownership of the ? rst HyWind test tur- expect success. They have the ? nancial support of Oslo and bine in February 2019, is still the key to much of the hoped- the attention of a market looking for ef? ciencies. The logic of for innovation. While it’s ? oating cable factory isn’t expected turning an offshore vessel owner and cable supplier into a grid to open for another two years — the approximate timeline, owner’s savings supplier seem irresistible. And although the too, for the ? rst spooling-ship newbuilds and the custom wind spool-your-own ship concept doesn’t yet have a designer, ship cable — Unitech is con? dent innovation will occur. owner or shipyard lined up, the business models seem sound, “It took us a year to really understand what a major player and the spool barge already exists.

we can (and will) be,” Birkeland says, adding that it’s only “Floating offshore wind has to cut cost in the level of 30-40 been two or three years since the company started looking into percent to be competitive. Unitech cable design, manufactur- how to optimize subsea power cables for wind. ing and installation deliver at least 30 percent cost savings “We started looking into submarine power cables…by ac- over existing solutions,” Birkeland says, adding that test cen- cident. We did not really believe that there was much devel- ters for dynamic cables are hard to ? nd. So, Unitech and its opment. However, it’s been proven that our 30 years of sub- partners are building a test center for wind’s entrepreneurs and sea distribution system experience had a lot to offer the cable researchers, and all marine wind suppliers are welcome.

industry. It seems today’s de- signs are more based on exist- ing manufacturing facilities than the optimum design for ? oating wind and installations.

It’s like with electrical cars, it is hard to rebuild your gaso- line engine factory,” he says, adding that he sees Unitech as

The timing is right for a new

Tesla of that type. While Uni-