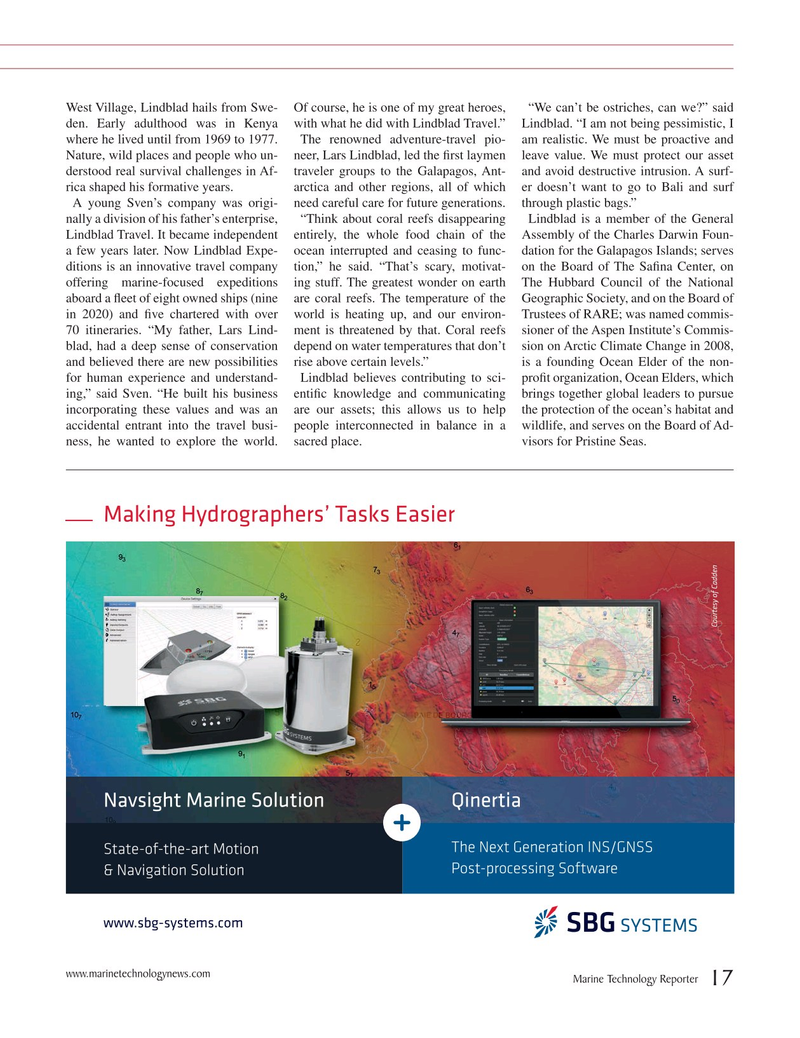 West Village, Lindblad hails from Swe- Of course, he is one of my great heroes, “We can’t be ostriches, can we?” said den. Early adulthood was in Kenya with what he did with Lindblad Travel.” Lindblad. “I am not being pessimistic, I where he lived until from 1969 to 1977. The renowned adventure-travel pio- am realistic. We must be proactive and

Nature, wild places and people who un- neer, Lars Lindblad, led the ? rst laymen leave value. We must protect our asset derstood real survival challenges in Af- traveler groups to the Galapagos, Ant- and avoid destructive intrusion. A surf- rica shaped his formative years. arctica and other regions, all of which er doesn’t want to go to Bali and surf

A young Sven’s company was origi- need careful care for future generations. through plastic bags.” nally a division of his father’s enterprise, “Think about coral reefs disappearing Lindblad is a member of the General

Lindblad Travel. It became independent entirely, the whole food chain of the Assembly of the Charles Darwin Foun- a few years later. Now Lindblad Expe- ocean interrupted and ceasing to func- dation for the Galapagos Islands; serves ditions is an innovative travel company tion,” he said. “That’s scary, motivat- on the Board of The Sa? na Center, on offering marine-focused expeditions ing stuff. The greatest wonder on earth The Hubbard Council of the National aboard a ? eet of eight owned ships (nine are coral reefs. The temperature of the Geographic Society, and on the Board of in 2020) and ? ve chartered with over world is heating up, and our environ- Trustees of RARE; was named commis- 70 itineraries. “My father, Lars Lind- ment is threatened by that. Coral reefs sioner of the Aspen Institute’s Commis- blad, had a deep sense of conservation depend on water temperatures that don’t sion on Arctic Climate Change in 2008, and believed there are new possibilities rise above certain levels.” is a founding Ocean Elder of the non- for human experience and understand- Lindblad believes contributing to sci- pro? t organization, Ocean Elders, which ing,” said Sven. “He built his business enti? c knowledge and communicating brings together global leaders to pursue incorporating these values and was an are our assets; this allows us to help the protection of the ocean’s habitat and accidental entrant into the travel busi- people interconnected in balance in a wildlife, and serves on the Board of Ad- ness, he wanted to explore the world. sacred place. visors for Pristine Seas.