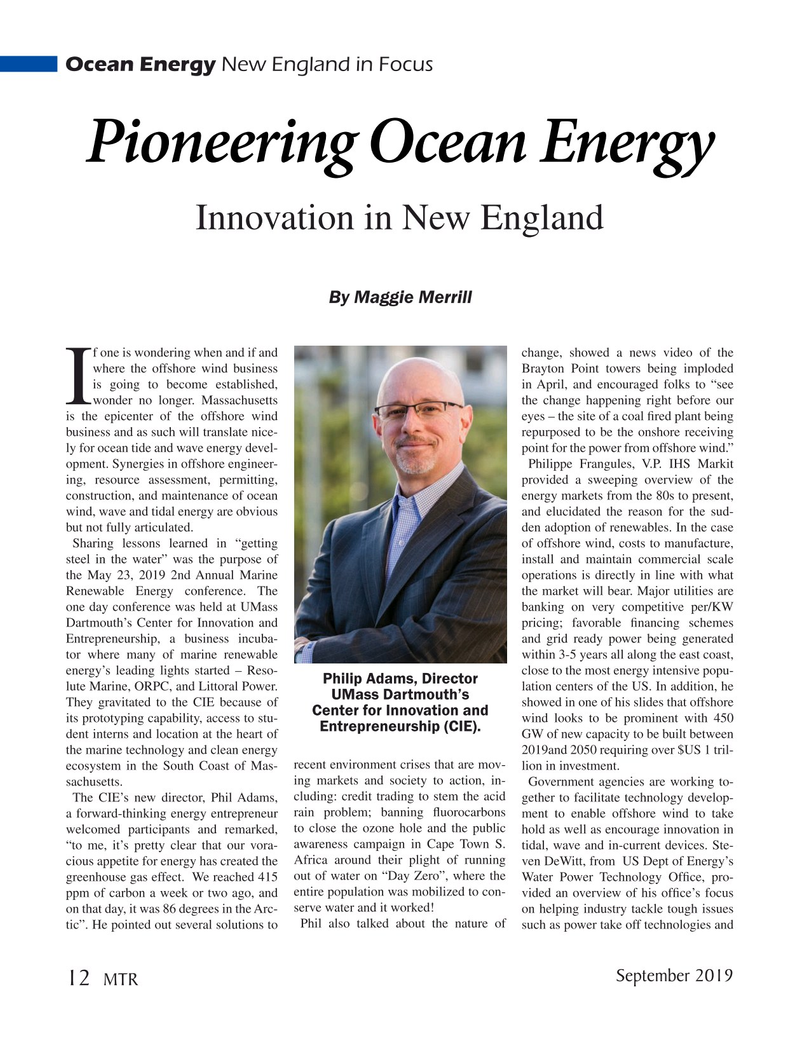 By Maggie Merrill f one is wondering when and if and change, showed a news video of the where the offshore wind business Brayton Point towers being imploded is going to become established, in April, and encouraged folks to “see

Iwonder no longer. Massachusetts the change happening right before our is the epicenter of the offshore wind eyes – the site of a coal ? red plant being business and as such will translate nice- repurposed to be the onshore receiving ly for ocean tide and wave energy devel- point for the power from offshore wind.” opment. Synergies in offshore engineer- Philippe Frangules, V.P. IHS Markit ing, resource assessment, permitting, provided a sweeping overview of the construction, and maintenance of ocean energy markets from the 80s to present, wind, wave and tidal energy are obvious and elucidated the reason for the sud- but not fully articulated. den adoption of renewables. In the case

Sharing lessons learned in “getting of offshore wind, costs to manufacture, steel in the water” was the purpose of install and maintain commercial scale the May 23, 2019 2nd Annual Marine operations is directly in line with what

Renewable Energy conference. The the market will bear. Major utilities are one day conference was held at UMass banking on very competitive per/KW

Entrepreneurship, a business incuba- and grid ready power being generated tor where many of marine renewable within 3-5 years all along the east coast, energy’s leading lights started – Reso- close to the most energy intensive popu-

Philip Adams, Director lute Marine, ORPC, and Littoral Power. lation centers of the US. In addition, he

Center for Innovation and its prototyping capability, access to stu- wind looks to be prominent with 450

dent interns and location at the heart of GW of new capacity to be built between the marine technology and clean energy 2019and 2050 requiring over $US 1 tril- ecosystem in the South Coast of Mas- recent environment crises that are mov- lion in investment.

sachusetts. ing markets and society to action, in- Government agencies are working to-

The CIE’s new director, Phil Adams, cluding: credit trading to stem the acid gether to facilitate technology develop- a forward-thinking energy entrepreneur rain problem; banning ? uorocarbons ment to enable offshore wind to take welcomed participants and remarked, to close the ozone hole and the public hold as well as encourage innovation in “to me, it’s pretty clear that our vora- awareness campaign in Cape Town S. tidal, wave and in-current devices. Ste- cious appetite for energy has created the Africa around their plight of running ven DeWitt, from US Dept of Energy’s greenhouse gas effect. We reached 415 out of water on “Day Zero”, where the Water Power Technology Of? ce, pro- ppm of carbon a week or two ago, and entire population was mobilized to con- vided an overview of his of? ce’s focus on that day, it was 86 degrees in the Arc- serve water and it worked! on helping industry tackle tough issues tic”. He pointed out several solutions to Phil also talked about the nature of such as power take off technologies and September 2019