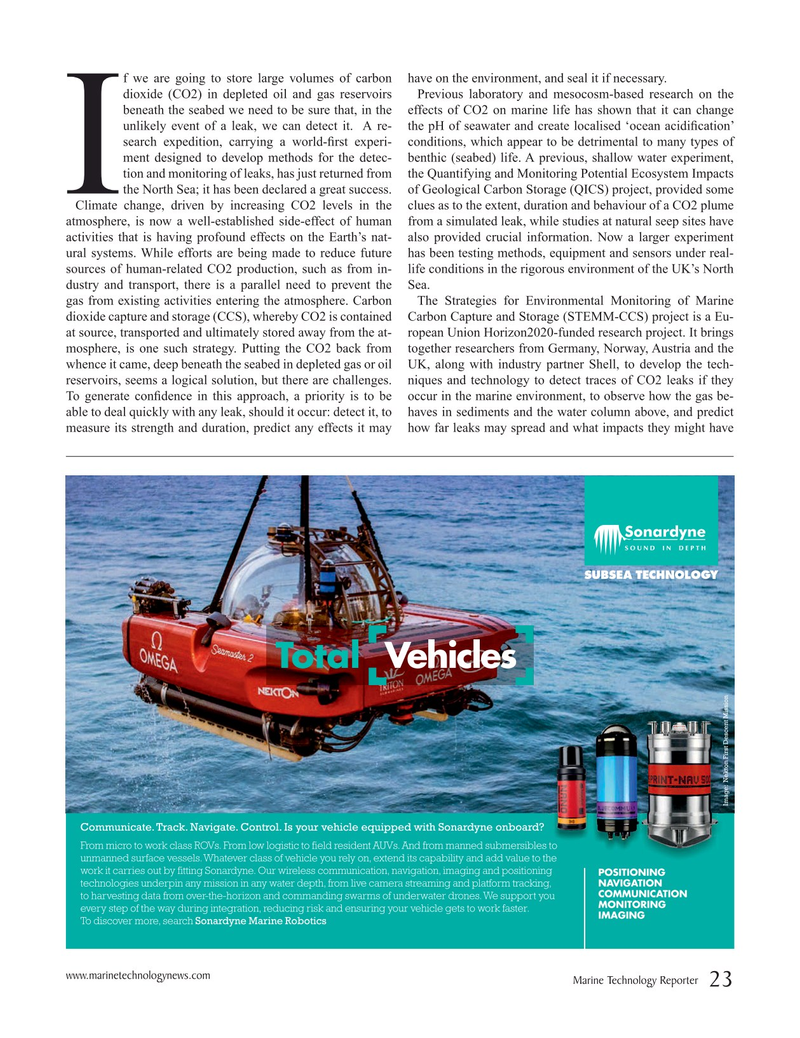 f we are going to store large volumes of carbon have on the environment, and seal it if necessary. dioxide (CO2) in depleted oil and gas reservoirs Previous laboratory and mesocosm-based research on the beneath the seabed we need to be sure that, in the effects of CO2 on marine life has shown that it can change unlikely event of a leak, we can detect it. A re- the pH of seawater and create localised ‘ocean acidi? cation’ search expedition, carrying a world-? rst experi- conditions, which appear to be detrimental to many types of ment designed to develop methods for the detec- benthic (seabed) life. A previous, shallow water experiment, tion and monitoring of leaks, has just returned from the Quantifying and Monitoring Potential Ecosystem Impacts

Ithe North Sea; it has been declared a great success. of Geological Carbon Storage (QICS) project, provided some

Climate change, driven by increasing CO2 levels in the clues as to the extent, duration and behaviour of a CO2 plume atmosphere, is now a well-established side-effect of human from a simulated leak, while studies at natural seep sites have activities that is having profound effects on the Earth’s nat- also provided crucial information. Now a larger experiment ural systems. While efforts are being made to reduce future has been testing methods, equipment and sensors under real- sources of human-related CO2 production, such as from in- life conditions in the rigorous environment of the UK’s North dustry and transport, there is a parallel need to prevent the Sea. gas from existing activities entering the atmosphere. Carbon The Strategies for Environmental Monitoring of Marine dioxide capture and storage (CCS), whereby CO2 is contained Carbon Capture and Storage (STEMM-CCS) project is a Eu- at source, transported and ultimately stored away from the at- ropean Union Horizon2020-funded research project. It brings mosphere, is one such strategy. Putting the CO2 back from together researchers from Germany, Norway, Austria and the whence it came, deep beneath the seabed in depleted gas or oil UK, along with industry partner Shell, to develop the tech- reservoirs, seems a logical solution, but there are challenges. niques and technology to detect traces of CO2 leaks if they

To generate con? dence in this approach, a priority is to be occur in the marine environment, to observe how the gas be- able to deal quickly with any leak, should it occur: detect it, to haves in sediments and the water column above, and predict measure its strength and duration, predict any effects it may how far leaks may spread and what impacts they might have www.marinetechnologynews.com