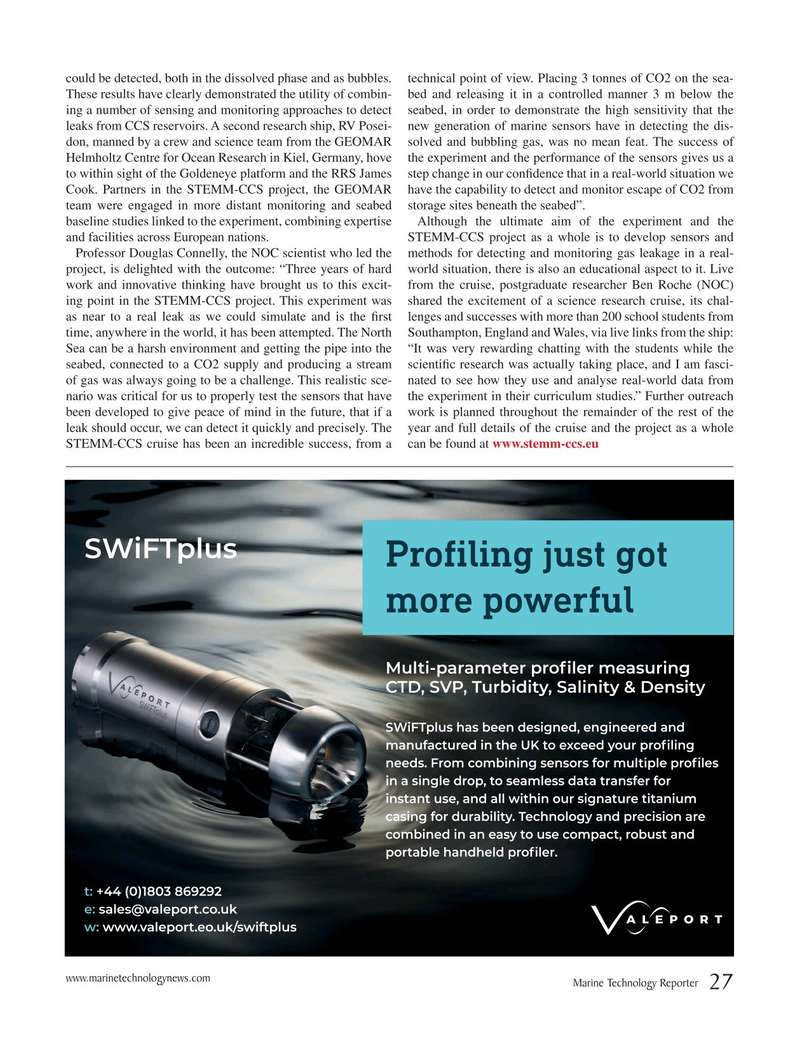 could be detected, both in the dissolved phase and as bubbles. technical point of view. Placing 3 tonnes of CO2 on the sea-

These results have clearly demonstrated the utility of combin- bed and releasing it in a controlled manner 3 m below the ing a number of sensing and monitoring approaches to detect seabed, in order to demonstrate the high sensitivity that the leaks from CCS reservoirs. A second research ship, RV Posei- new generation of marine sensors have in detecting the dis- don, manned by a crew and science team from the GEOMAR solved and bubbling gas, was no mean feat. The success of

Helmholtz Centre for Ocean Research in Kiel, Germany, hove the experiment and the performance of the sensors gives us a to within sight of the Goldeneye platform and the RRS James step change in our con? dence that in a real-world situation we

Cook. Partners in the STEMM-CCS project, the GEOMAR have the capability to detect and monitor escape of CO2 from team were engaged in more distant monitoring and seabed storage sites beneath the seabed”.

baseline studies linked to the experiment, combining expertise Although the ultimate aim of the experiment and the and facilities across European nations. STEMM-CCS project as a whole is to develop sensors and

Professor Douglas Connelly, the NOC scientist who led the methods for detecting and monitoring gas leakage in a real- project, is delighted with the outcome: “Three years of hard world situation, there is also an educational aspect to it. Live work and innovative thinking have brought us to this excit- from the cruise, postgraduate researcher Ben Roche (NOC) ing point in the STEMM-CCS project. This experiment was shared the excitement of a science research cruise, its chal- as near to a real leak as we could simulate and is the ? rst lenges and successes with more than 200 school students from time, anywhere in the world, it has been attempted. The North Southampton, England and Wales, via live links from the ship:

Sea can be a harsh environment and getting the pipe into the “It was very rewarding chatting with the students while the seabed, connected to a CO2 supply and producing a stream scienti? c research was actually taking place, and I am fasci- of gas was always going to be a challenge. This realistic sce- nated to see how they use and analyse real-world data from nario was critical for us to properly test the sensors that have the experiment in their curriculum studies.” Further outreach been developed to give peace of mind in the future, that if a work is planned throughout the remainder of the rest of the leak should occur, we can detect it quickly and precisely. The year and full details of the cruise and the project as a whole

STEMM-CCS cruise has been an incredible success, from a can be found at www.stemm-ccs.eu ³á?IÁ????