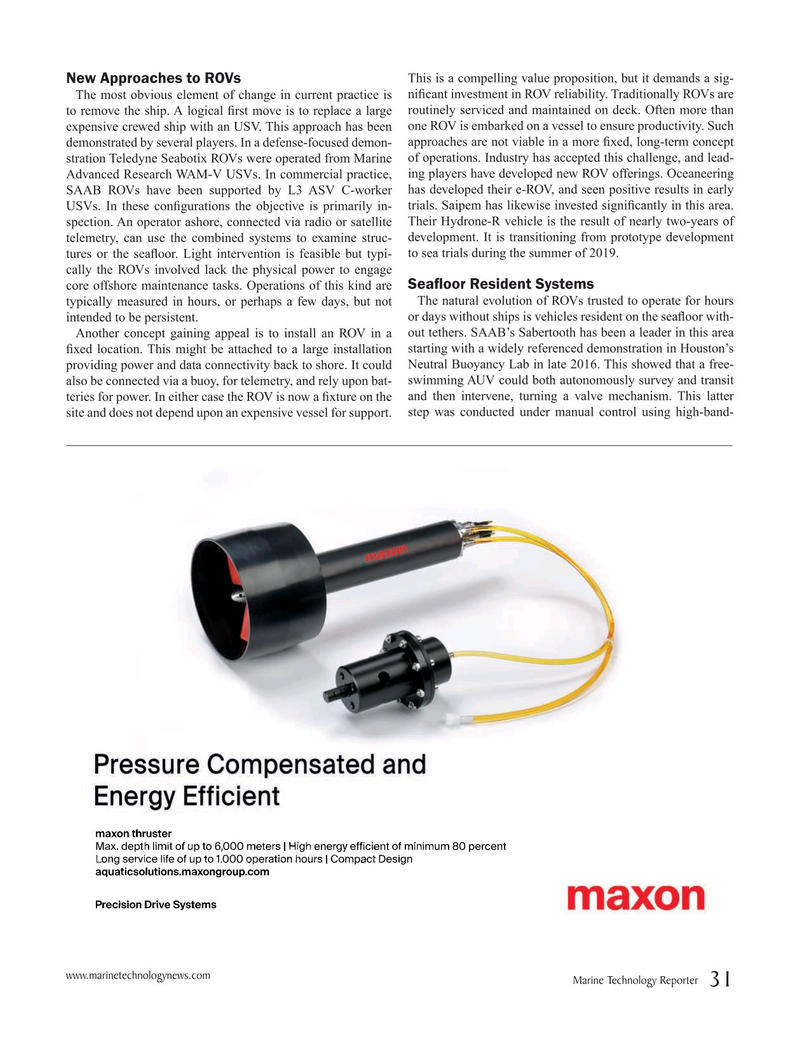 This is a compelling value proposition, but it demands a sig-

The most obvious element of change in current practice is ni? cant investment in ROV reliability. Traditionally ROVs are to remove the ship. A logical ? rst move is to replace a large routinely serviced and maintained on deck. Often more than expensive crewed ship with an USV. This approach has been one ROV is embarked on a vessel to ensure productivity. Such demonstrated by several players. In a defense-focused demon- approaches are not viable in a more ? xed, long-term concept stration Teledyne Seabotix ROVs were operated from Marine of operations. Industry has accepted this challenge, and lead-

SAAB ROVs have been supported by L3 ASV C-worker has developed their e-ROV, and seen positive results in early

USVs. In these con? gurations the objective is primarily in- trials. Saipem has likewise invested signi? cantly in this area. spection. An operator ashore, connected via radio or satellite Their Hydrone-R vehicle is the result of nearly two-years of telemetry, can use the combined systems to examine struc- development. It is transitioning from prototype development tures or the sea? oor. Light intervention is feasible but typi- to sea trials during the summer of 2019.

cally the ROVs involved lack the physical power to engage

Sea? oor Resident Systems core offshore maintenance tasks. Operations of this kind are typically measured in hours, or perhaps a few days, but not The natural evolution of ROVs trusted to operate for hours intended to be persistent. or days without ships is vehicles resident on the sea? oor with-

Another concept gaining appeal is to install an ROV in a out tethers. SAAB’s Sabertooth has been a leader in this area ? xed location. This might be attached to a large installation starting with a widely referenced demonstration in Houston’s providing power and data connectivity back to shore. It could Neutral Buoyancy Lab in late 2016. This showed that a free- also be connected via a buoy, for telemetry, and rely upon bat- swimming AUV could both autonomously survey and transit teries for power. In either case the ROV is now a ? xture on the and then intervene, turning a valve mechanism. This latter site and does not depend upon an expensive vessel for support. step was conducted under manual control using high-band- www.marinetechnologynews.com