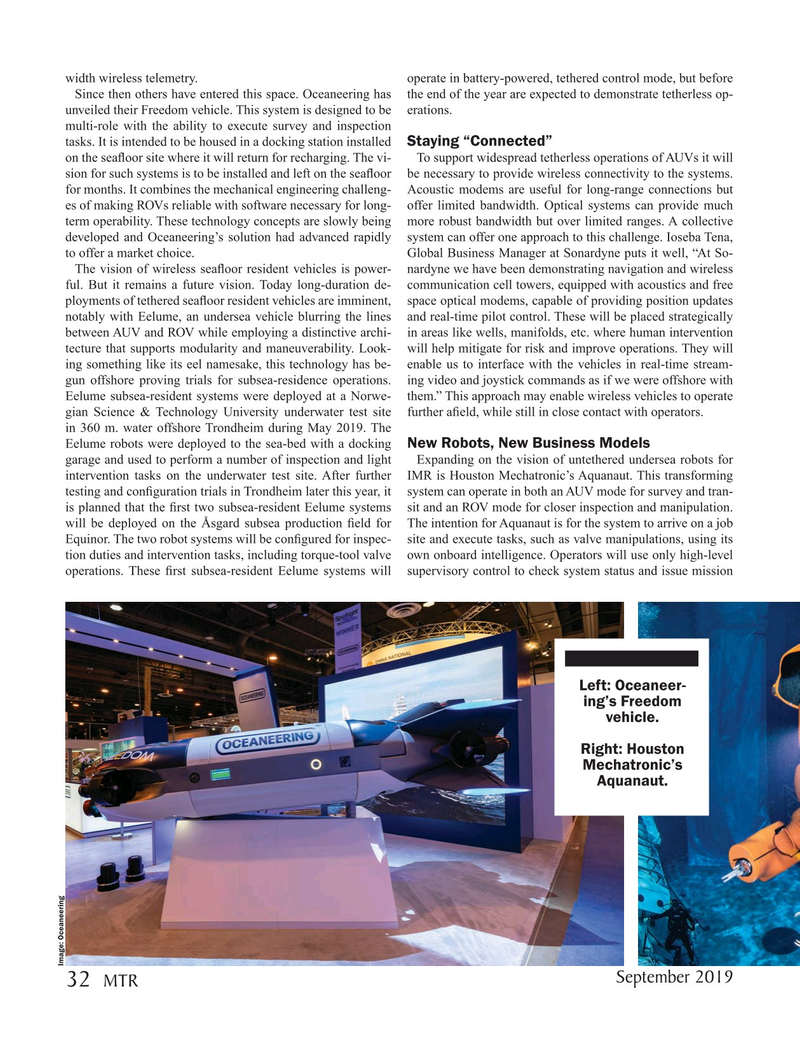 Since then others have entered this space. Oceaneering has the end of the year are expected to demonstrate tetherless op- unveiled their Freedom vehicle. This system is designed to be erations. multi-role with the ability to execute survey and inspection tasks. It is intended to be housed in a docking station installed Staying “Connected” on the sea? oor site where it will return for recharging. The vi- To support widespread tetherless operations of AUVs it will sion for such systems is to be installed and left on the sea? oor be necessary to provide wireless connectivity to the systems. for months. It combines the mechanical engineering challeng- Acoustic modems are useful for long-range connections but es of making ROVs reliable with software necessary for long- offer limited bandwidth. Optical systems can provide much term operability. These technology concepts are slowly being more robust bandwidth but over limited ranges. A collective developed and Oceaneering’s solution had advanced rapidly system can offer one approach to this challenge. Ioseba Tena, to offer a market choice. Global Business Manager at Sonardyne puts it well, “At So-

The vision of wireless sea? oor resident vehicles is power- nardyne we have been demonstrating navigation and wireless ful. But it remains a future vision. Today long-duration de- communication cell towers, equipped with acoustics and free ployments of tethered sea? oor resident vehicles are imminent, space optical modems, capable of providing position updates notably with Eelume, an undersea vehicle blurring the lines and real-time pilot control. These will be placed strategically between AUV and ROV while employing a distinctive archi- in areas like wells, manifolds, etc. where human intervention tecture that supports modularity and maneuverability. Look- will help mitigate for risk and improve operations. They will ing something like its eel namesake, this technology has be- enable us to interface with the vehicles in real-time stream- gun offshore proving trials for subsea-residence operations. ing video and joystick commands as if we were offshore with

Eelume subsea-resident systems were deployed at a Norwe- them.” This approach may enable wireless vehicles to operate gian Science & Technology University underwater test site further a? eld, while still in close contact with operators.

Eelume robots were deployed to the sea-bed with a docking New Robots, New Business Models garage and used to perform a number of inspection and light Expanding on the vision of untethered undersea robots for intervention tasks on the underwater test site. After further IMR is Houston Mechatronic’s Aquanaut. This transforming testing and con? guration trials in Trondheim later this year, it system can operate in both an AUV mode for survey and tran- is planned that the ? rst two subsea-resident Eelume systems sit and an ROV mode for closer inspection and manipulation. will be deployed on the Åsgard subsea production ? eld for The intention for Aquanaut is for the system to arrive on a job

Equinor. The two robot systems will be con? gured for inspec- site and execute tasks, such as valve manipulations, using its tion duties and intervention tasks, including torque-tool valve own onboard intelligence. Operators will use only high-level operations. These ? rst subsea-resident Eelume systems will supervisory control to check system status and issue mission