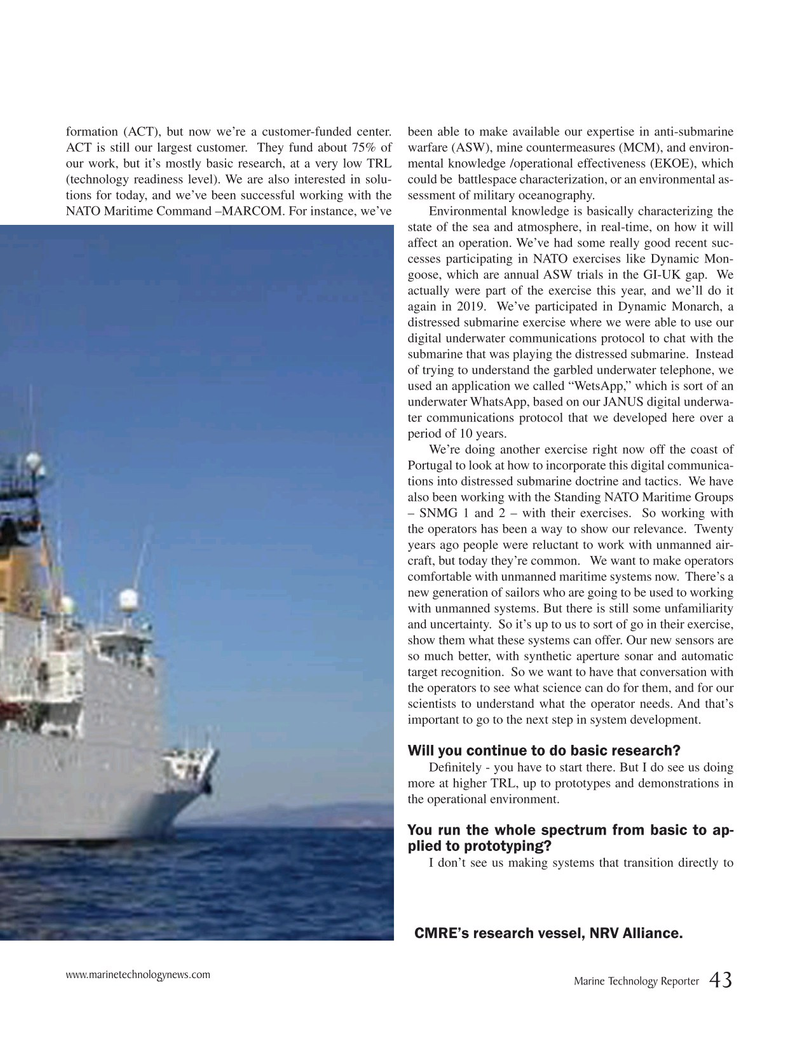 formation (ACT), but now we’re a customer-funded center. been able to make available our expertise in anti-submarine

ACT is still our largest customer. They fund about 75% of warfare (ASW), mine countermeasures (MCM), and environ- our work, but it’s mostly basic research, at a very low TRL mental knowledge /operational effectiveness (EKOE), which (technology readiness level). We are also interested in solu- could be battlespace characterization, or an environmental as- tions for today, and we’ve been successful working with the sessment of military oceanography.

NATO Maritime Command –MARCOM. For instance, we’ve Environmental knowledge is basically characterizing the state of the sea and atmosphere, in real-time, on how it will affect an operation. We’ve had some really good recent suc- cesses participating in NATO exercises like Dynamic Mon- goose, which are annual ASW trials in the GI-UK gap. We actually were part of the exercise this year, and we’ll do it again in 2019. We’ve participated in Dynamic Monarch, a distressed submarine exercise where we were able to use our digital underwater communications protocol to chat with the submarine that was playing the distressed submarine. Instead of trying to understand the garbled underwater telephone, we used an application we called “WetsApp,” which is sort of an underwater WhatsApp, based on our JANUS digital underwa- ter communications protocol that we developed here over a period of 10 years. We’re doing another exercise right now off the coast of

Portugal to look at how to incorporate this digital communica- tions into distressed submarine doctrine and tactics. We have also been working with the Standing NATO Maritime Groups – SNMG 1 and 2 – with their exercises. So working with the operators has been a way to show our relevance. Twenty years ago people were reluctant to work with unmanned air- craft, but today they’re common. We want to make operators comfortable with unmanned maritime systems now. There’s a new generation of sailors who are going to be used to working with unmanned systems. But there is still some unfamiliarity and uncertainty. So it’s up to us to sort of go in their exercise, show them what these systems can offer. Our new sensors are so much better, with synthetic aperture sonar and automatic target recognition. So we want to have that conversation with the operators to see what science can do for them, and for our scientists to understand what the operator needs. And that’s important to go to the next step in system development.

Will you continue to do basic research?

De? nitely - you have to start there. But I do see us doing more at higher TRL, up to prototypes and demonstrations in the operational environment.

You run the whole spectrum from basic to ap- plied to prototyping?

I don’t see us making systems that transition directly to