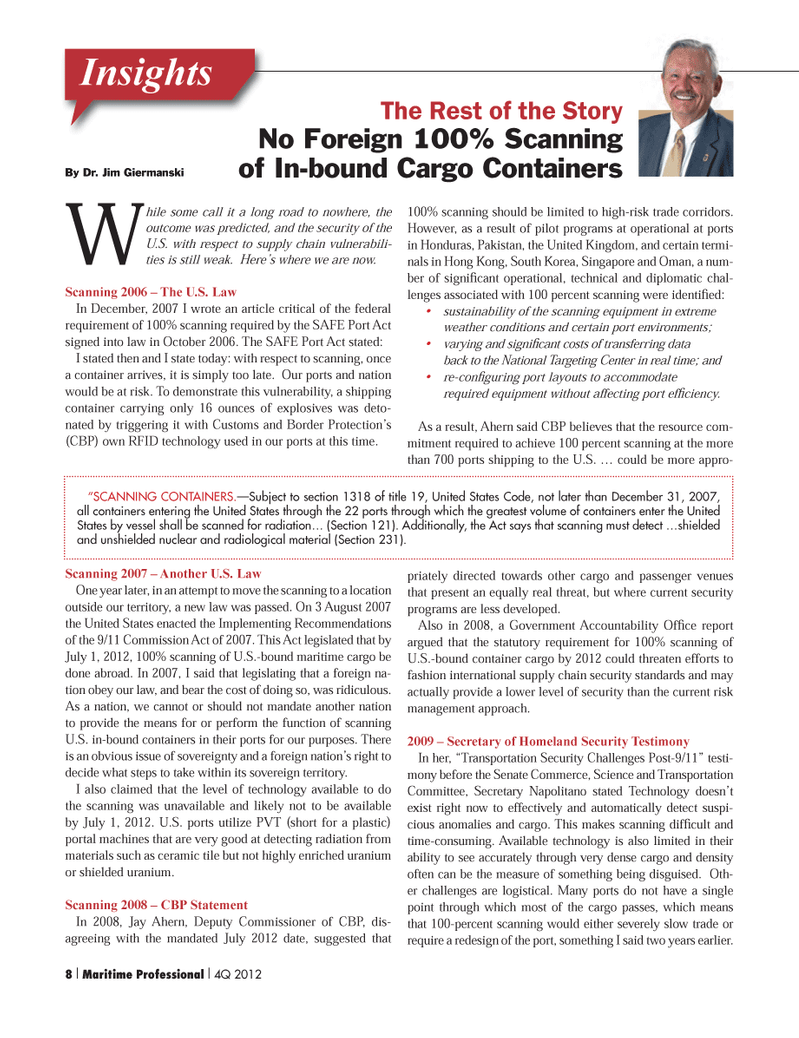 The Rest of the Story No Foreign 100% Scanning of In-bound Cargo Containers By Dr. Jim Giermanski NInsightsWhile some call it a long road to nowhere, the outcome was predicted, and the security of the U.S. with respect to supply chain vulnerabili- ties is still weak. Here?s where we are now. Scanning 2006 ? The U.S. Law In December, 2007 I wrote an article critical of the federal requirement of 100% scanning required by the SAFE Port Act signed into law in October 2006. The SAFE Port Act stated: I stated then and I state today: with respect to scanning, once a container arrives, it is simply too late. Our ports and nation would be at risk. To demonstrate this vulnerability, a shipping container carrying only 16 ounces of explosives was deto- nated by triggering it with Customs and Border Protection?s (CBP) own RFID technology used in our ports at this time. Scanning 2007 ? Another U.S. Law One year later, in an attempt to move the scanning to a location outside our territory, a new law was passed. On 3 August 2007 the United States enacted the Implementing Recommendations of the 9/11 Commission Act of 2007. This Act legislated that by July 1, 2012, 100% scanning of U.S.-bound maritime cargo be done abroad. In 2007, I said that legislating that a foreign na- tion obey our law, and bear the cost of doing so, was ridiculous. As a nation, we cannot or should not mandate another nation to provide the means for or perform the function of scanning U.S. in-bound containers in their ports for our purposes. There is an obvious issue of sovereignty and a foreign nation?s right to decide what steps to take within its sovereign territory. I also claimed that the level of technology available to do the scanning was unavailable and likely not to be available by July 1, 2012. U.S. ports utilize PVT (short for a plastic) portal machines that are very good at detecting radiation from materials such as ceramic tile but not highly enriched uranium or shielded uranium. Scanning 2008 ? CBP StatementIn 2008, Jay Ahern, Deputy Commissioner of CBP, dis- agreeing with the mandated July 2012 date, suggested that 100% scanning should be limited to high-risk trade corridors. However, as a result of pilot programs at operational at ports in Honduras, Pakistan, the United Kingdom, and certain termi- nals in Hong Kong, South Korea, Singapore and Oman, a num- ber of signi cant operational, technical and diplomatic chal- lenges associated with 100 percent scanning were identi ed:  sustainability of the scanning equipment in extreme weather conditions and certain port environments;  varying and signi cant costs of transferring data back to the National Targeting Center in real time; and  re-con guring port layouts to accommodate required equipment without affecting port ef ciency. As a result, Ahern said CBP believes that the resource com- mitment required to achieve 100 percent scanning at the more than 700 ports shipping to the U.S. ? could be more appro-priately directed towards other cargo and passenger venues that present an equally real threat, but where current security programs are less developed. Also in 2008, a Government Accountability Of ce report argued that the statutory requirement for 100% scanning of U.S.-bound container cargo by 2012 could threaten efforts to fashion international supply chain security standards and may actually provide a lower level of security than the current risk management approach.2009 ? Secretary of Homeland Security Testimony In her, ?Transportation Security Challenges Post-9/11? testi- mony before the Senate Commerce, Science and Transportation Committee, Secretary Napolitano stated Technology doesn?t exist right now to effectively and automatically detect suspi- cious anomalies and cargo. This makes scanning dif cult and time-consuming. Available technology is also limited in their ability to see accurately through very dense cargo and density often can be the measure of something being disguised. Oth-er challenges are logistical. Many ports do not have a single point through which most of the cargo passes, which means that 100-percent scanning would either severely slow trade or require a redesign of the port, something I said two years earlier. ?SCANNING CONTAINERS. ?Subject to section 1318 of title 19, United States Code, not later than December 31, 2007, all containers entering the United States through the 22 ports through which the greatest volume of containers enter the United States by vessel shall be scanned for radiation? (Section 121). Additionally, the Act says that scanning must detect ?shielded and unshielded nuclear and radiological material (Section 231).8 I Maritime Professional I 4Q 2012MP #4 1-17.indd 8MP #4 1-17.indd 811/12/2012 11:41:58 AM11/12/2012 11:41:58 AM