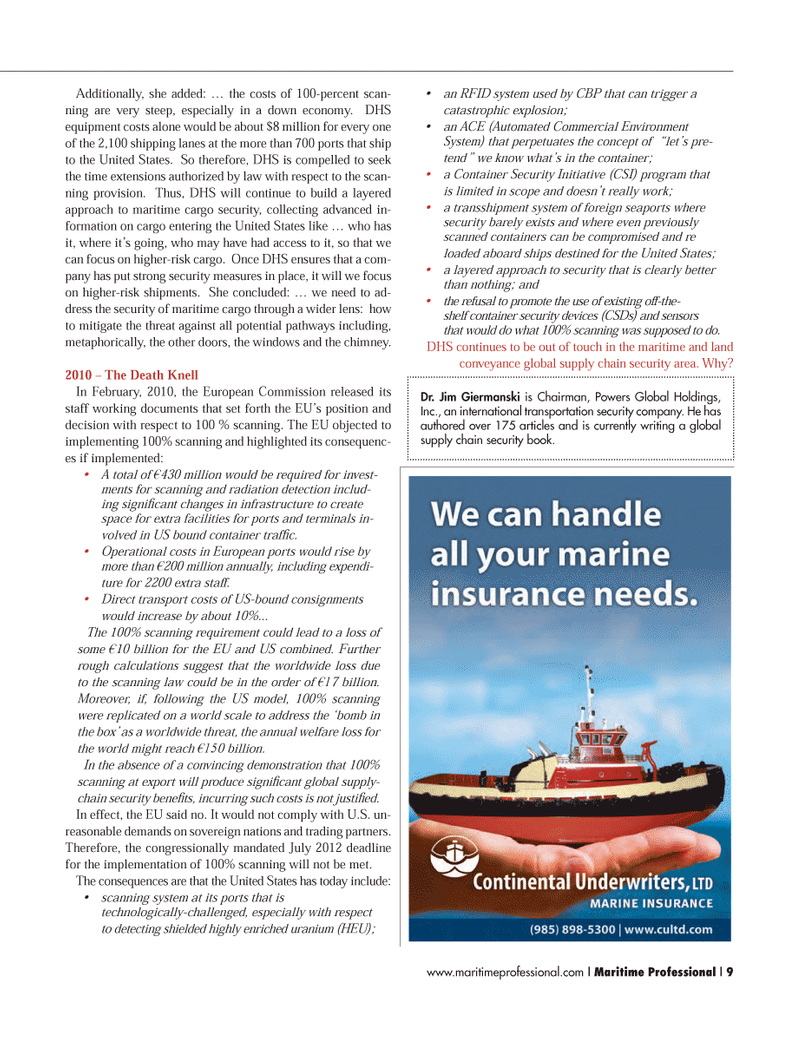 Additionally, she added: ? the costs of 100-percent scan- ning are very steep, especially in a down economy. DHS equipment costs alone would be about $8 million for every one of the 2,100 shipping lanes at the more than 700 ports that ship to the United States. So therefore, DHS is compelled to seek the time extensions authorized by law with respect to the scan- ning provision. Thus, DHS will continue to build a layered approach to maritime cargo security, collecting advanced in- formation on cargo entering the United States like ? who has it, where it?s going, who may have had access to it, so that we can focus on higher-risk cargo. Once DHS ensures that a com- pany has put strong security measures in place, it will we focus on higher-risk shipments. She concluded: ? we need to ad- dress the security of maritime cargo through a wider lens: how to mitigate the threat against all potential pathways including, metaphorically, the other doors, the windows and the chimney. 2010 ? The Death Knell In February, 2010, the European Commission released its staff working documents that set forth the EU?s position and decision with respect to 100 % scanning. The EU objected to implementing 100% scanning and highlighted its consequenc-es if implemented:  A total of ?430 million would be required for invest- ments for scanning and radiation detection includ- ing signi cant changes in infrastructure to create space for extra facilities for ports and terminals in- volved in US bound container traf c.  Operational costs in European ports would rise by more than ?200 million annually, including expendi- ture for 2200 extra staff.  Direct transport costs of US-bound consignments would increase by about 10%... The 100% scanning requirement could lead to a loss of some ?10 billion for the EU and US combined. Further rough calculations suggest that the worldwide loss due to the scanning law could be in the order of ?17 billion. Moreover, if, following the US model, 100% scanning were replicated on a world scale to address the ?bomb in the box? as a worldwide threat, the annual welfare loss for the world might reach ?150 billion.In the absence of a convincing demonstration that 100% scanning at export will produce signi cant global supply- chain security bene ts, incurring such costs is not justi ed.In effect, the EU said no. It would not comply with U.S. un- reasonable demands on sovereign nations and trading partners. Therefore, the congressionally mandated July 2012 deadline for the implementation of 100% scanning will not be met.The consequences are that the United States has today include: scanning system at its ports that is technologically-challenged, especially with respect to detecting shielded highly enriched uranium (HEU);  an RFID system used by CBP that can trigger a catastrophic explosion;  an ACE (Automated Commercial Environment System) that perpetuates the concept of ?let?s pre- tend? we know what?s in the container;  a Container Security Initiative (CSI) program that is limited in scope and doesn?t really work;  a transshipment system of foreign seaports where security barely exists and where even previously scanned containers can be compromised and re loaded aboard ships destined for the United States;  a layered approach to security that is clearly better than nothing; and  the refusal to promote the use of existing off-the- shelf container security devices (CSDs) and sensors that would do what 100% scanning was supposed to do. DHS continues to be out of touch in the maritime and land conveyance global supply chain security area. Why? Dr. Jim Giermanski is Chairman, Powers Global Holdings, Inc., an international transportation security company. He has authored over 175 articles and is currently writing a global supply chain security book.www.maritimeprofessional.com | Maritime Professional | 9MP #4 1-17.indd 9MP #4 1-17.indd 911/12/2012 11:42:11 AM11/12/2012 11:42:11 AM