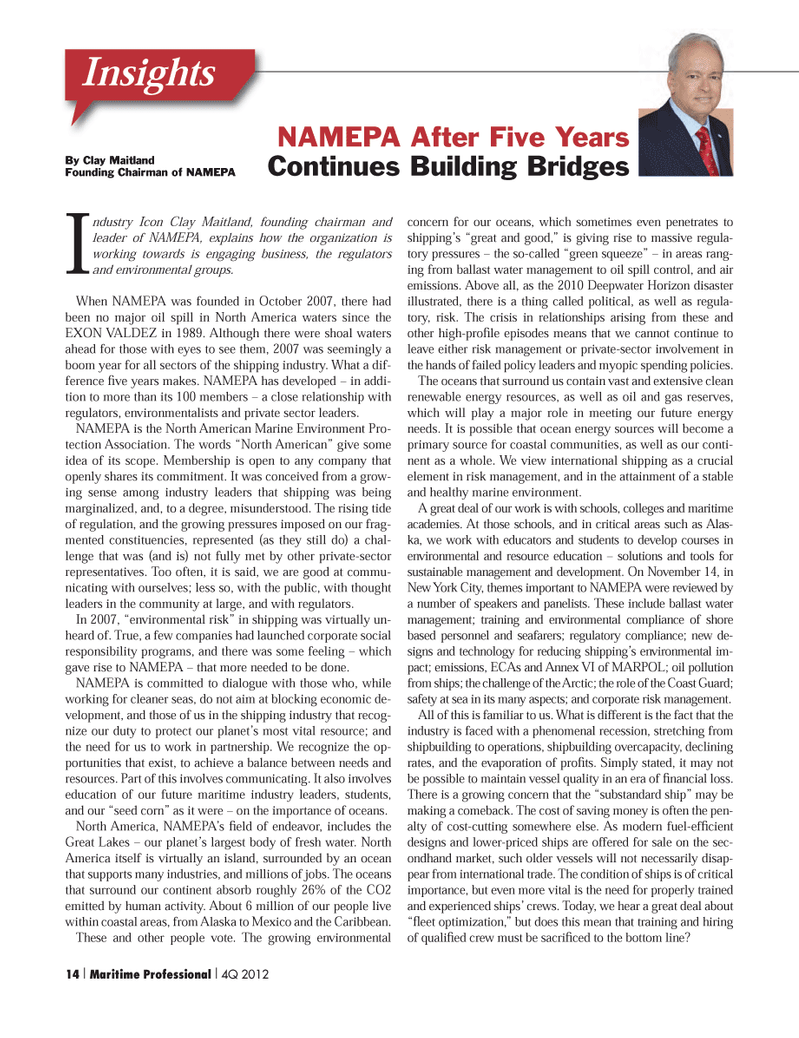 Industry Icon Clay Maitland, founding chairman and leader of NAMEPA, explains how the organization is working towards is engaging business, the regulators and environmental groups. When NAMEPA was founded in October 2007, there had been no major oil spill in North America waters since the EXON VALDEZ in 1989. Although there were shoal waters ahead for those with eyes to see them, 2007 was seemingly a boom year for all sectors of the shipping industry. What a dif- ference Þ ve years makes. NAMEPA has developed Ð in addi- tion to more than its 100 members Ð a close relationship with regulators, environmentalists and private sector leaders. NAMEPA is the North American Marine Environment Pro- tection Association. The words ÒNorth AmericanÓ give some idea of its scope. Membership is open to any company that openly shares its commitment. It was conceived from a grow- ing sense among industry leaders that shipping was being marginalized, and, to a degree, misunderstood. The rising tide of regulation, and the growing pressures imposed on our frag- mented constituencies, represented (as they still do) a chal- lenge that was (and is) not fully met by other private-sector representatives. Too often, it is said, we are good at commu- nicating with ourselves; less so, with the public, with thought leaders in the community at large, and with regulators. In 2007, Òenvironmental riskÓ in shipping was virtually un- heard of. True, a few companies had launched corporate social responsibility programs, and there was some feeling Ð which gave rise to NAMEPA Ð that more needed to be done. NAMEPA is committed to dialogue with those who, while working for cleaner seas, do not aim at blocking economic de- velopment, and those of us in the shipping industry that recog- nize our duty to protect our planetÕs most vital resource; and the need for us to work in partnership. We recognize the op- portunities that exist, to achieve a balance between needs and resources. Part of this involves communicating. It also involves education of our future maritime industry leaders, students, and our Òseed cornÓ as it were Ð on the importance of oceans.North America, NAMEPAÕs Þ eld of endeavor, includes the Great Lakes Ð our planetÕs largest body of fresh water. North America itself is virtually an island, surrounded by an ocean that supports many industries, and millions of jobs. The oceans that surround our continent absorb roughly 26% of the CO2 emitted by human activity. About 6 million of our people live within coastal areas, from Alaska to Mexico and the Caribbean. These and other people vote. The growing environmental concern for our oceans, which sometimes even penetrates to shippingÕs Ògreat and good,Ó is giving rise to massive regula- tory pressures Ð the so-called Ògreen squeezeÓ Ð in areas rang-ing from ballast water management to oil spill control, and air emissions. Above all, as the 2010 Deepwater Horizon disaster illustrated, there is a thing called political, as well as regula- tory, risk. The crisis in relationships arising from these and other high-proÞ le episodes means that we cannot continue to leave either risk management or private-sector involvement in the hands of failed policy leaders and myopic spending policies. The oceans that surround us contain vast and extensive clean renewable energy resources, as well as oil and gas reserves, which will play a major role in meeting our future energy needs. It is possible that ocean energy sources will become a primary source for coastal communities, as well as our conti-nent as a whole. We view international shipping as a crucial element in risk management, and in the attainment of a stable and healthy marine environment. A great deal of our work is with schools, colleges and maritime academies. At those schools, and in critical areas such as Alas- ka, we work with educators and students to develop courses in environmental and resource education Ð solutions and tools for sustainable management and development. On November 14, in New York City, themes important to NAMEPA were reviewed by a number of speakers and panelists. These include ballast water management; training and environmental compliance of shore based personnel and seafarers; regulatory compliance; new de- signs and technology for reducing shippingÕs environmental im- pact; emissions, ECAs and Annex VI of MARPOL; oil pollution from ships; the challenge of the Arctic; the role of the Coast Guard; safety at sea in its many aspects; and corporate risk management. All of this is familiar to us. What is different is the fact that the industry is faced with a phenomenal recession, stretching from shipbuilding to operations, shipbuilding overcapacity, declining rates, and the evaporation of proÞ ts. Simply stated, it may not be possible to maintain vessel quality in an era of Þ nancial loss. There is a growing concern that the Òsubstandard shipÓ may be making a comeback. The cost of saving money is often the pen- alty of cost-cutting somewhere else. As modern fuel-efÞ cient designs and lower-priced ships are offered for sale on the sec- ondhand market, such older vessels will not necessarily disap- pear from international trade. The condition of ships is of critical importance, but even more vital is the need for properly trained and experienced shipsÕ crews. Today, we hear a great deal about Òß eet optimization,Ó but does this mean that training and hiring of qualiÞ ed crew must be sacriÞ ced to the bottom line? NAMEPA After Five Years Continues Building BridgesBy Clay Maitland Founding Chairman of NAMEPA Insights14 I Maritime Professional I 4Q 2012MP #4 1-17.indd 14MP #4 1-17.indd 1411/12/2012 11:43:02 AM11/12/2012 11:43:02 AM