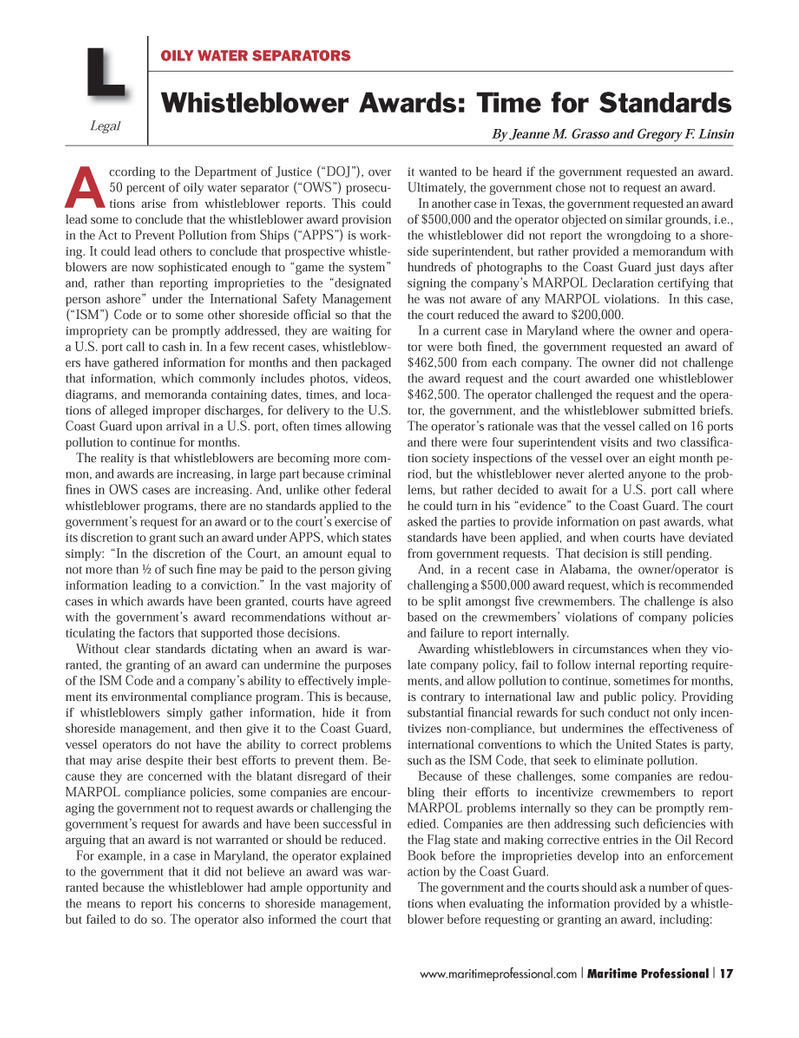 According to the Department of Justice (?DOJ?), over 50 percent of oily water separator (?OWS?) prosecu- tions arise from whistleblower reports. This could lead some to conclude that the whistleblower award provision in the Act to Prevent Pollution from Ships (?APPS?) is work- ing. It could lead others to conclude that prospective whistle- blowers are now sophisticated enough to ?game the system? and, rather than reporting improprieties to the ?designated person ashore? under the International Safety Management (?ISM?) Code or to some other shoreside of cial so that the impropriety can be promptly addressed, they are waiting for a U.S. port call to cash in. In a few recent cases, whistleblow- ers have gathered information for months and then packaged that information, which commonly includes photos, videos, diagrams, and memoranda containing dates, times, and loca-tions of alleged improper discharges, for delivery to the U.S. Coast Guard upon arrival in a U.S. port, often times allowing pollution to continue for months.The reality is that whistleblowers are becoming more com- mon, and awards are increasing, in large part because criminal  nes in OWS cases are increasing. And, unlike other federal whistleblower programs, there are no standards applied to the government?s request for an award or to the court?s exercise of its discretion to grant such an award under APPS, which states simply: ?In the discretion of the Court, an amount equal to not more than ½ of such  ne may be paid to the person giving information leading to a conviction.? In the vast majority of cases in which awards have been granted, courts have agreed with the government?s award recommendations without ar- ticulating the factors that supported those decisions. Without clear standards dictating when an award is war- ranted, the granting of an award can undermine the purposes of the ISM Code and a company?s ability to effectively imple- ment its environmental compliance program. This is because, if whistleblowers simply gather information, hide it from shoreside management, and then give it to the Coast Guard, vessel operators do not have the ability to correct problems that may arise despite their best efforts to prevent them. Be- cause they are concerned with the blatant disregard of their MARPOL compliance policies, some companies are encour- aging the government not to request awards or challenging the government?s request for awards and have been successful in arguing that an award is not warranted or should be reduced. For example, in a case in Maryland, the operator explained to the government that it did not believe an award was war- ranted because the whistleblower had ample opportunity and the means to report his concerns to shoreside management, but failed to do so. The operator also informed the court that it wanted to be heard if the government requested an award. Ultimately, the government chose not to request an award. In another case in Texas, the government requested an award of $500,000 and the operator objected on similar grounds, i.e., the whistleblower did not report the wrongdoing to a shore- side superintendent, but rather provided a memorandum with hundreds of photographs to the Coast Guard just days after signing the company?s MARPOL Declaration certifying that he was not aware of any MARPOL violations. In this case, the court reduced the award to $200,000. In a current case in Maryland where the owner and opera- tor were both  ned, the government requested an award of $462,500 from each company. The owner did not challenge the award request and the court awarded one whistleblower $462,500. The operator challenged the request and the opera- tor, the government, and the whistleblower submitted briefs. The operator?s rationale was that the vessel called on 16 ports and there were four superintendent visits and two classi ca-tion society inspections of the vessel over an eight month pe- riod, but the whistleblower never alerted anyone to the prob- lems, but rather decided to await for a U.S. port call where he could turn in his ?evidence? to the Coast Guard. The court asked the parties to provide information on past awards, what standards have been applied, and when courts have deviated from government requests. That decision is still pending. And, in a recent case in Alabama, the owner/operator is challenging a $500,000 award request, which is recommended to be split amongst  ve crewmembers. The challenge is also based on the crewmembers? violations of company policies and failure to report internally. Awarding whistleblowers in circumstances when they vio- late company policy, fail to follow internal reporting require- ments, and allow pollution to continue, sometimes for months, is contrary to international law and public policy. Providing substantial  nancial rewards for such conduct not only incen- tivizes non-compliance, but undermines the effectiveness of international conventions to which the United States is party, such as the ISM Code, that seek to eliminate pollution.Because of these challenges, some companies are redou-bling their efforts to incentivize crewmembers to report MARPOL problems internally so they can be promptly rem- edied. Companies are then addressing such de ciencies with the Flag state and making corrective entries in the Oil Record Book before the improprieties develop into an enforcement action by the Coast Guard.The government and the courts should ask a number of ques- tions when evaluating the information provided by a whistle- blower before requesting or granting an award, including: Legal OILY WATER SEPARATORS Whistleblower Awards: Time for Standards LBy Jeanne M. Grasso and Gregory F. Linsin www.maritimeprofessional.com I Maritime Professional I 17MP #4 1-17.indd 17MP #4 1-17.indd 1711/12/2012 12:01:38 PM11/12/2012 12:01:38 PM