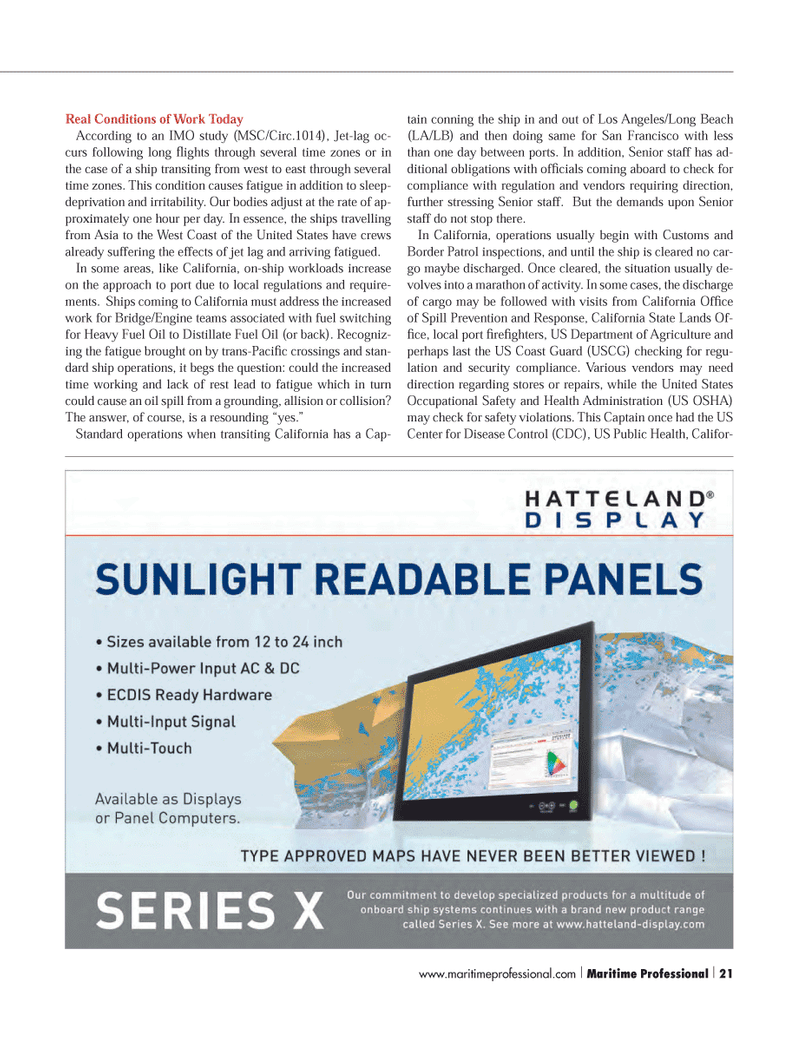 Real Conditions of Work Today According to an IMO study (MSC/Circ.1014), Jet-lag oc-curs following long ß ights through several time zones or in the case of a ship transiting from west to east through several time zones. This condition causes fatigue in addition to sleep- deprivation and irritability. Our bodies adjust at the rate of ap- proximately one hour per day. In essence, the ships travelling from Asia to the West Coast of the United States have crews already suffering the effects of jet lag and arriving fatigued. In some areas, like California, on-ship workloads increase on the approach to port due to local regulations and require- ments. Ships coming to California must address the increased work for Bridge/Engine teams associated with fuel switching for Heavy Fuel Oil to Distillate Fuel Oil (or back). Recogniz- ing the fatigue brought on by trans-PaciÞ c crossings and stan- dard ship operations, it begs the question: could the increased time working and lack of rest lead to fatigue which in turn could cause an oil spill from a grounding, allision or collision? The answer, of course, is a resounding Òyes.Ó Standard operations when transiting California has a Cap-tain conning the ship in and out of Los Angeles/Long Beach (LA/LB) and then doing same for San Francisco with less than one day between ports. In addition, Senior staff has ad- ditional obligations with ofÞ cials coming aboard to check for compliance with regulation and vendors requiring direction, further stressing Senior staff. But the demands upon Senior staff do not stop there. In California, operations usually begin with Customs and Border Patrol inspections, and until the ship is cleared no car- go maybe discharged. Once cleared, the situation usually de- volves into a marathon of activity. In some cases, the discharge of cargo may be followed with visits from California OfÞ ce of Spill Prevention and Response, California State Lands Of- Þ ce, local port Þ reÞ ghters, US Department of Agriculture and perhaps last the US Coast Guard (USCG) checking for regu- lation and security compliance. Various vendors may need direction regarding stores or repairs, while the United States Occupational Safety and Health Administration (US OSHA) may check for safety violations. This Captain once had the US Center for Disease Control (CDC), US Public Health, Califor- www.maritimeprofessional.com | Maritime Professional | 21MP #4 18-33.indd 21MP #4 18-33.indd 2111/12/2012 9:35:49 AM11/12/2012 9:35:49 AM