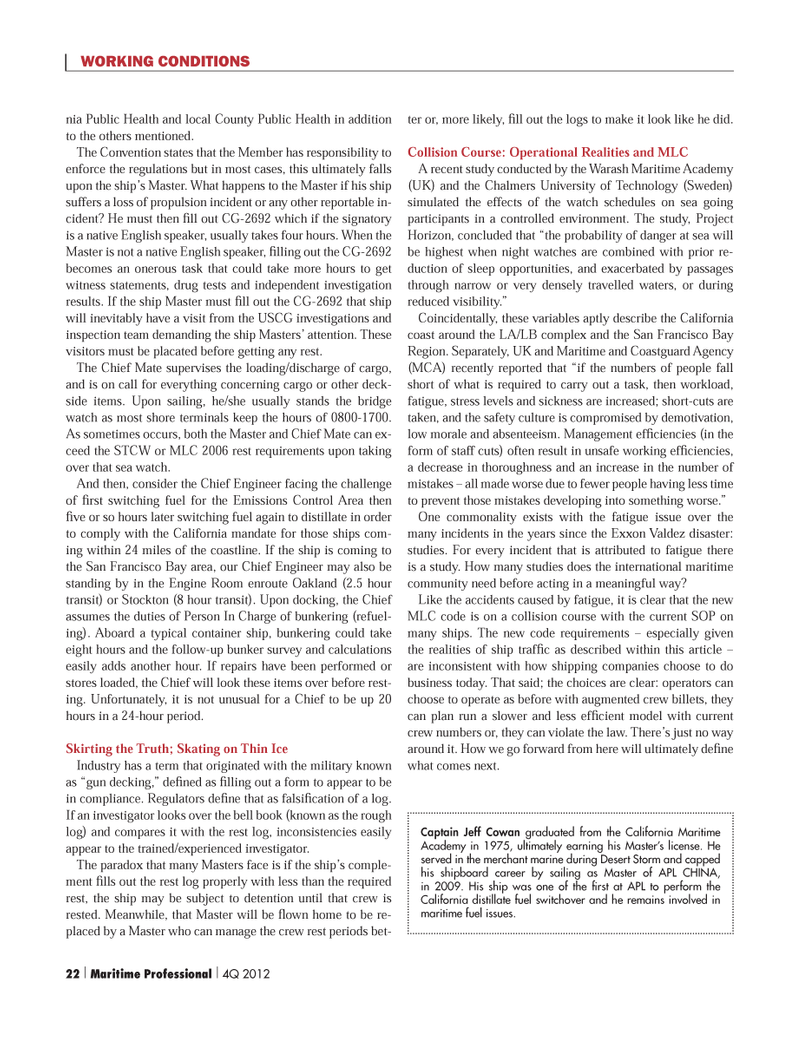 nia Public Health and local County Public Health in addition to the others mentioned. The Convention states that the Member has responsibility to enforce the regulations but in most cases, this ultimately falls upon the ship?s Master. What happens to the Master if his ship suffers a loss of propulsion incident or any other reportable in- cident? He must then  ll out CG-2692 which if the signatory is a native English speaker, usually takes four hours. When the Master is not a native English speaker,  lling out the CG-2692 becomes an onerous task that could take more hours to get witness statements, drug tests and independent investigation results. If the ship Master must  ll out the CG-2692 that ship will inevitably have a visit from the USCG investigations and inspection team demanding the ship Masters? attention. These visitors must be placated before getting any rest. The Chief Mate supervises the loading/discharge of cargo, and is on call for everything concerning cargo or other deck- side items. Upon sailing, he/she usually stands the bridge watch as most shore terminals keep the hours of 0800-1700. As sometimes occurs, both the Master and Chief Mate can ex- ceed the STCW or MLC 2006 rest requirements upon taking over that sea watch. And then, consider the Chief Engineer facing the challenge of  rst switching fuel for the Emissions Control Area then  ve or so hours later switching fuel again to distillate in order to comply with the California mandate for those ships com-ing within 24 miles of the coastline. If the ship is coming to the San Francisco Bay area, our Chief Engineer may also be standing by in the Engine Room enroute Oakland (2.5 hour transit) or Stockton (8 hour transit). Upon docking, the Chief assumes the duties of Person In Charge of bunkering (refuel- ing). Aboard a typical container ship, bunkering could take eight hours and the follow-up bunker survey and calculations easily adds another hour. If repairs have been performed or stores loaded, the Chief will look these items over before rest- ing. Unfortunately, it is not unusual for a Chief to be up 20 hours in a 24-hour period.Skirting the Truth; Skating on Thin Ice Industry has a term that originated with the military known as ?gun decking,? de ned as  lling out a form to appear to be in compliance. Regulators de ne that as falsi cation of a log. If an investigator looks over the bell book (known as the rough log) and compares it with the rest log, inconsistencies easily appear to the trained/experienced investigator. The paradox that many Masters face is if the ship?s comple- ment  lls out the rest log properly with less than the required rest, the ship may be subject to detention until that crew is rested. Meanwhile, that Master will be  own home to be re- placed by a Master who can manage the crew rest periods bet- ter or, more likely,  ll out the logs to make it look like he did. Collision Course: Operational Realities and MLCA recent study conducted by the Warash Maritime Academy (UK) and the Chalmers University of Technology (Sweden) simulated the effects of the watch schedules on sea going participants in a controlled environment. The study, Project Horizon, concluded that ?the probability of danger at sea will be highest when night watches are combined with prior re- duction of sleep opportunities, and exacerbated by passages through narrow or very densely travelled waters, or during reduced visibility.? Coincidentally, these variables aptly describe the California coast around the LA/LB complex and the San Francisco Bay Region. Separately, UK and Maritime and Coastguard Agency (MCA) recently reported that ?if the numbers of people fall short of what is required to carry out a task, then workload, fatigue, stress levels and sickness are increased; short-cuts are taken, and the safety culture is compromised by demotivation, low morale and absenteeism. Management ef ciencies (in the form of staff cuts) often result in unsafe working ef ciencies, a decrease in thoroughness and an increase in the number of mistakes ? all made worse due to fewer people having less time to prevent those mistakes developing into something worse.? One commonality exists with the fatigue issue over the many incidents in the years since the Exxon Valdez disaster: studies. For every incident that is attributed to fatigue there is a study. How many studies does the international maritime community need before acting in a meaningful way? Like the accidents caused by fatigue, it is clear that the new MLC code is on a collision course with the current SOP on many ships. The new code requirements ? especially given the realities of ship traf c as described within this article ? are inconsistent with how shipping companies choose to do business today. That said; the choices are clear: operators can choose to operate as before with augmented crew billets, they can plan run a slower and less ef cient model with current crew numbers or, they can violate the law. There?s just no way around it. How we go forward from here will ultimately de ne what comes next. WORKING CONDITIONS Captain Jeff Cowan graduated from the California Maritime Academy in 1975, ultimately earning his Master?s license. He served in the merchant marine during Desert Storm and capped his shipboard career by sailing as Master of APL CHINA, in 2009. His ship was one of the  rst at APL to perform the California distillate fuel switchover and he remains involved in maritime fuel issues.22 | Maritime Professional | 4Q 2012MP #4 18-33.indd 22MP #4 18-33.indd 2211/12/2012 9:37:43 AM11/12/2012 9:37:43 AM