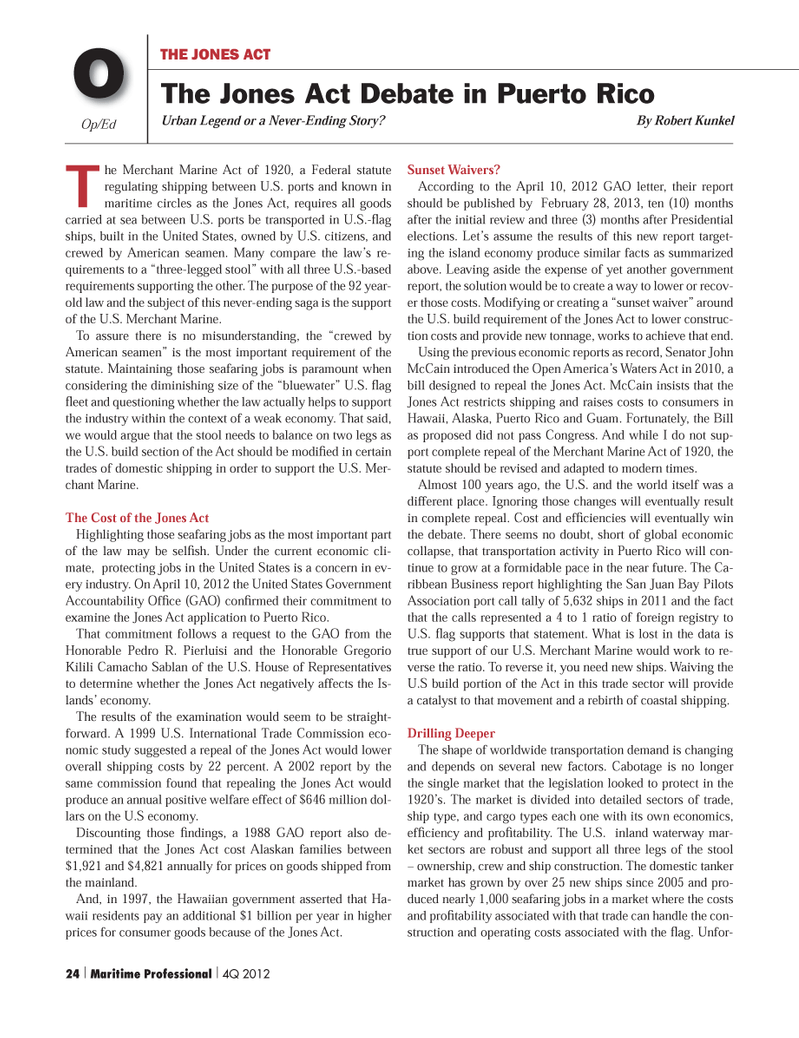 Op/EdTHE JONES ACT The Jones Act Debate in Puerto RicoOThe Merchant Marine Act of 1920, a Federal statute regulating shipping between U.S. ports and known in maritime circles as the Jones Act, requires all goods carried at sea between U.S. ports be transported in U.S.-ß ag ships, built in the United States, owned by U.S. citizens, and crewed by American seamen. Many compare the lawÕs re- quirements to a Òthree-legged stoolÓ with all three U.S.-based requirements supporting the other. The purpose of the 92 year- old law and the subject of this never-ending saga is the support of the U.S. Merchant Marine.To assure there is no misunderstanding, the Òcrewed by American seamenÓ is the most important requirement of the statute. Maintaining those seafaring jobs is paramount when considering the diminishing size of the ÒbluewaterÓ U.S. ß ag ß eet and questioning whether the law actually helps to support the industry within the context of a weak economy. That said, we would argue that the stool needs to balance on two legs as the U.S. build section of the Act should be modiÞ ed in certain trades of domestic shipping in order to support the U.S. Mer- chant Marine. The Cost of the Jones Act Highlighting those seafaring jobs as the most important part of the law may be selÞ sh. Under the current economic cli- mate, protecting jobs in the United States is a concern in ev- ery industry. On April 10, 2012 the United States Government Accountability OfÞ ce (GAO) conÞ rmed their commitment to examine the Jones Act application to Puerto Rico. That commitment follows a request to the GAO from the Honorable Pedro R. Pierluisi and the Honorable Gregorio Kilili Camacho Sablan of the U.S. House of Representatives to determine whether the Jones Act negatively affects the Is- landsÕ economy. The results of the examination would seem to be straight- forward. A 1999 U.S. International Trade Commission eco- nomic study suggested a repeal of the Jones Act would lower overall shipping costs by 22 percent. A 2002 report by the same commission found that repealing the Jones Act would produce an annual positive welfare effect of $646 million dol- lars on the U.S economy. Discounting those Þ ndings, a 1988 GAO report also de- termined that the Jones Act cost Alaskan families between $1,921 and $4,821 annually for prices on goods shipped from the mainland. And, in 1997, the Hawaiian government asserted that Ha- waii residents pay an additional $1 billion per year in higher prices for consumer goods because of the Jones Act. Sunset Waivers? According to the April 10, 2012 GAO letter, their report should be published by February 28, 2013, ten (10) months after the initial review and three (3) months after Presidential elections. LetÕs assume the results of this new report target- ing the island economy produce similar facts as summarized above. Leaving aside the expense of yet another government report, the solution would be to create a way to lower or recov- er those costs. Modifying or creating a Òsunset waiverÓ around the U.S. build requirement of the Jones Act to lower construc- tion costs and provide new tonnage, works to achieve that end. Using the previous economic reports as record, Senator John McCain introduced the Open AmericaÕs Waters Act in 2010, a bill designed to repeal the Jones Act. McCain insists that the Jones Act restricts shipping and raises costs to consumers in Hawaii, Alaska, Puerto Rico and Guam. Fortunately, the Bill as proposed did not pass Congress. And while I do not sup- port complete repeal of the Merchant Marine Act of 1920, the statute should be revised and adapted to modern times. Almost 100 years ago, the U.S. and the world itself was a different place. Ignoring those changes will eventually result in complete repeal. Cost and efÞ ciencies will eventually win the debate. There seems no doubt, short of global economic collapse, that transportation activity in Puerto Rico will con- tinue to grow at a formidable pace in the near future. The Ca- ribbean Business report highlighting the San Juan Bay Pilots Association port call tally of 5,632 ships in 2011 and the fact that the calls represented a 4 to 1 ratio of foreign registry to U.S. ß ag supports that statement. What is lost in the data is true support of our U.S. Merchant Marine would work to re- verse the ratio. To reverse it, you need new ships. Waiving the U.S build portion of the Act in this trade sector will provide a catalyst to that movement and a rebirth of coastal shipping. Drilling DeeperThe shape of worldwide transportation demand is changing and depends on several new factors. Cabotage is no longer the single market that the legislation looked to protect in the 1920Õs. The market is divided into detailed sectors of trade, ship type, and cargo types each one with its own economics, efÞ ciency and proÞ tability. The U.S. inland waterway mar- ket sectors are robust and support all three legs of the stool Ð ownership, crew and ship construction. The domestic tanker market has grown by over 25 new ships since 2005 and pro- duced nearly 1,000 seafaring jobs in a market where the costs and proÞ tability associated with that trade can handle the con- struction and operating costs associated with the ß ag. Unfor- By Robert Kunkel Urban Legend or a Never-Ending Story? 24 | Maritime Professional | 4Q 2012MP #4 18-33.indd 24MP #4 18-33.indd 2411/12/2012 9:38:49 AM11/12/2012 9:38:49 AM