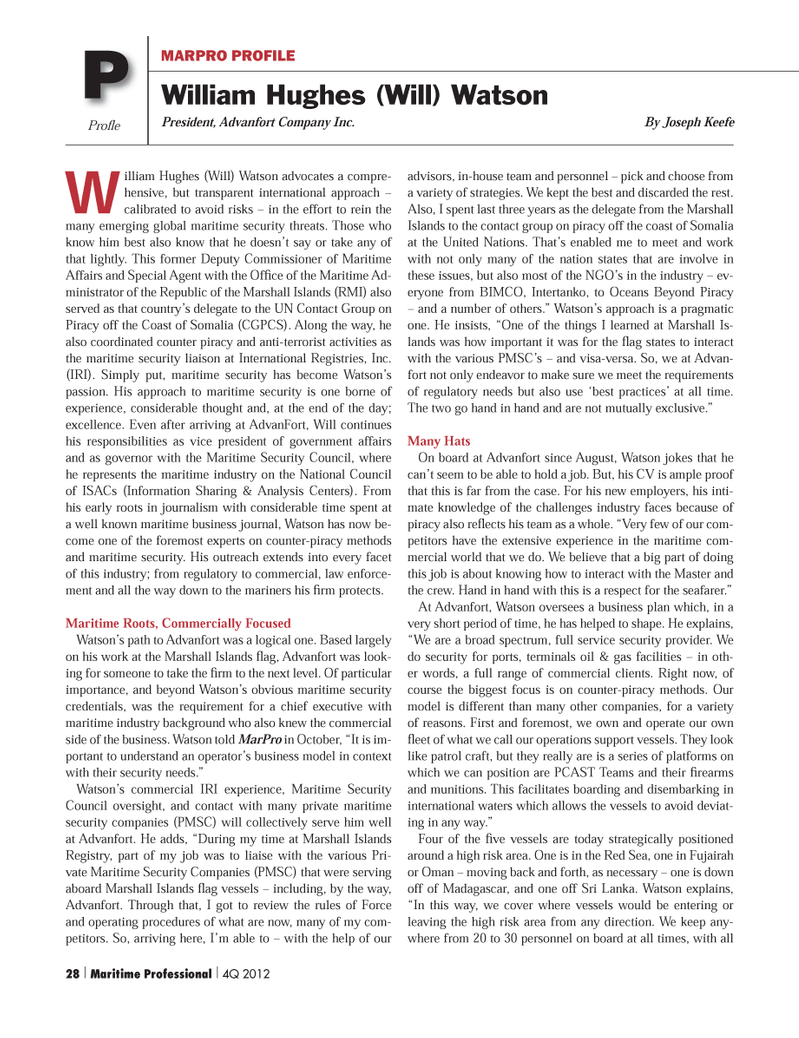 Proß e MARPRO PROFILE William Hughes (Will) Watson PWilliam Hughes (Will) Watson advocates a compre- hensive, but transparent international approach ? calibrated to avoid risks ? in the effort to rein the many emerging global maritime security threats. Those who know him best also know that he doesn?t say or take any of that lightly. This former Deputy Commissioner of Maritime Affairs and Special Agent with the Of ce of the Maritime Ad- ministrator of the Republic of the Marshall Islands (RMI) also served as that country?s delegate to the UN Contact Group on Piracy off the Coast of Somalia (CGPCS). Along the way, he also coordinated counter piracy and anti-terrorist activities as the maritime security liaison at International Registries, Inc. (IRI). Simply put, maritime security has become Watson?s passion. His approach to maritime security is one borne of experience, considerable thought and, at the end of the day; excellence. Even after arriving at AdvanFort, Will continues his responsibilities as vice president of government affairs and as governor with the Maritime Security Council, where he represents the maritime industry on the National Council of ISACs (Information Sharing & Analysis Centers). From his early roots in journalism with considerable time spent at a well known maritime business journal, Watson has now be- come one of the foremost experts on counter-piracy methods and maritime security. His outreach extends into every facet of this industry; from regulatory to commercial, law enforce- ment and all the way down to the mariners his  rm protects. Maritime Roots, Commercially Focused Watson?s path to Advanfort was a logical one. Based largely on his work at the Marshall Islands  ag, Advanfort was look- ing for someone to take the  rm to the next level. Of particular importance, and beyond Watson?s obvious maritime security credentials, was the requirement for a chief executive with maritime industry background who also knew the commercial side of the business. Watson told MarPro in October, ?It is im- portant to understand an operator?s business model in context with their security needs.? Watson?s commercial IRI experience, Maritime Security Council oversight, and contact with many private maritime security companies (PMSC) will collectively serve him well at Advanfort. He adds, ?During my time at Marshall Islands Registry, part of my job was to liaise with the various Pri- vate Maritime Security Companies (PMSC) that were serving aboard Marshall Islands  ag vessels ? including, by the way, Advanfort. Through that, I got to review the rules of Force and operating procedures of what are now, many of my com- petitors. So, arriving here, I?m able to ? with the help of our advisors, in-house team and personnel ? pick and choose from a variety of strategies. We kept the best and discarded the rest. Also, I spent last three years as the delegate from the Marshall Islands to the contact group on piracy off the coast of Somalia at the United Nations. That?s enabled me to meet and work with not only many of the nation states that are involve in these issues, but also most of the NGO?s in the industry ? ev- eryone from BIMCO, Intertanko, to Oceans Beyond Piracy ? and a number of others.? Watson?s approach is a pragmatic one. He insists, ?One of the things I learned at Marshall Is-lands was how important it was for the  ag states to interact with the various PMSC?s ? and visa-versa. So, we at Advan- fort not only endeavor to make sure we meet the requirements of regulatory needs but also use ?best practices? at all time. The two go hand in hand and are not mutually exclusive.? Many HatsOn board at Advanfort since August, Watson jokes that he can?t seem to be able to hold a job. But, his CV is ample proof that this is far from the case. For his new employers, his inti- mate knowledge of the challenges industry faces because of piracy also re ects his team as a whole. ?Very few of our com- petitors have the extensive experience in the maritime com- mercial world that we do. We believe that a big part of doing this job is about knowing how to interact with the Master and the crew. Hand in hand with this is a respect for the seafarer.? At Advanfort, Watson oversees a business plan which, in a very short period of time, he has helped to shape. He explains, ?We are a broad spectrum, full service security provider. We do security for ports, terminals oil & gas facilities ? in oth- er words, a full range of commercial clients. Right now, of course the biggest focus is on counter-piracy methods. Our model is different than many other companies, for a variety of reasons. First and foremost, we own and operate our own  eet of what we call our operations support vessels. They look like patrol craft, but they really are is a series of platforms on which we can position are PCAST Teams and their  rearms and munitions. This facilitates boarding and disembarking in international waters which allows the vessels to avoid deviat- ing in any way.? Four of the  ve vessels are today strategically positioned around a high risk area. One is in the Red Sea, one in Fujairah or Oman ? moving back and forth, as necessary ? one is down off of Madagascar, and one off Sri Lanka. Watson explains, ?In this way, we cover where vessels would be entering or leaving the high risk area from any direction. We keep any- where from 20 to 30 personnel on board at all times, with all By Joseph Keefe President, Advanfort Company Inc. 28 | Maritime Professional | 4Q 2012MP #4 18-33.indd 28MP #4 18-33.indd 2811/12/2012 9:40:18 AM11/12/2012 9:40:18 AM